Look What I Found

I have a macabre sense of style sometimes. Unusual, Gorey, Bizzare…sign me up. Taxidermy, animal skeletons, preserved insects……I’m your man. When I found this guy a few weeks ago…I pretty much squealed with delight in the middle of the junk store…..

Unfortunately, for me anyway, he is plastic. Probably designed for medical study…I’m guessing in the 60’s or 70’s…he is pretty damn close to the real thing.  His jaw is hinged with springs and that missing incisor  makes him all the more intimidating. His skull-cap is held on with little hooks on either side and is removable …making him the perfect size to hold a bowl of French onion dip at a Halloween party. And don’t think he won’t sometime in his future…… 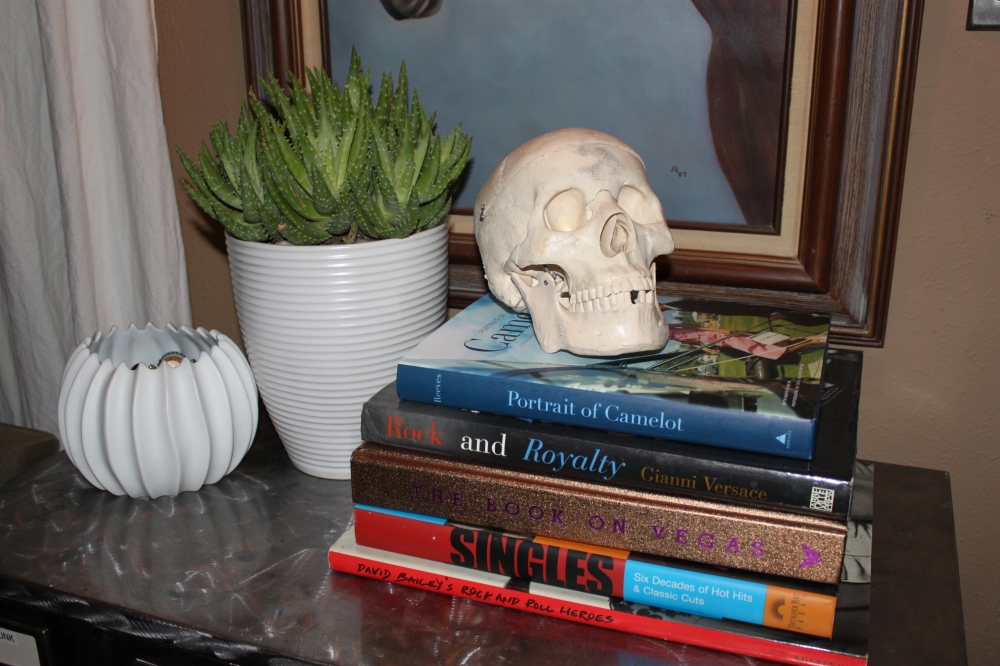 A Tale of 2 Chairs

Jamie has been dreaming of a leather chair from Restoration Hardware since we first went in to the new concept store just before we moved in together…and this week his dream came true. After a 2 week wait, his new baby was delivered yesterday afternoon. We haven’t given him a name just yet, but trust me, he is a new child. Deep, Rich and made from the same kind of leather that vintage bomber jackets are made from…….just dreamy. As usual, I was the voice of negativity, ” We have a chair already, we don’t need a new chair” …Boy was I wrong.  He fits our house just perfectly. See for yourselves…. 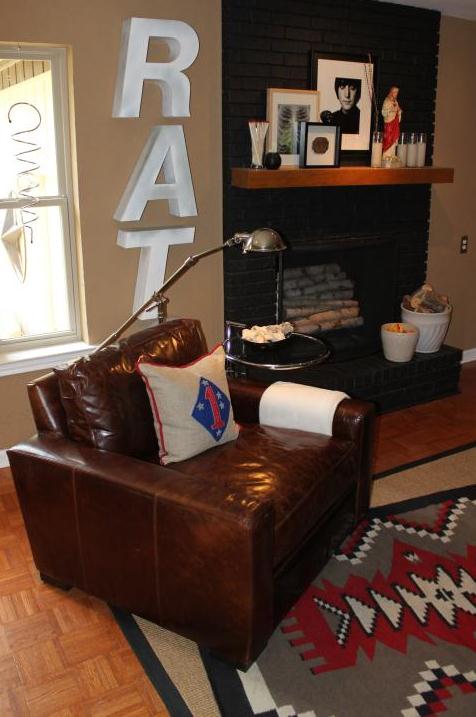 Looks like he has been there all this time

On a completely different note, I haven’t been to Salvation Army in years. I thrift occasionally, and our neighborhood is full of junky little resale stores. On a whim today we stopped by the Sally about 4 blocks away. In 5 minutes I had a handful of small things; a book I have wanted to read for years, a Bauer-inspired cobalt mixing bowl, and a skull & bones juice glass. I never even saw the solid wood office chair nestled at the electric organ near the front door. Jamie said,” I can’t believe that chair is only $30″. I bit immediately….. I knew this was a chair that Atticus Finch would have had in his office.

30 minutes later, here it is sitting at my desk……. 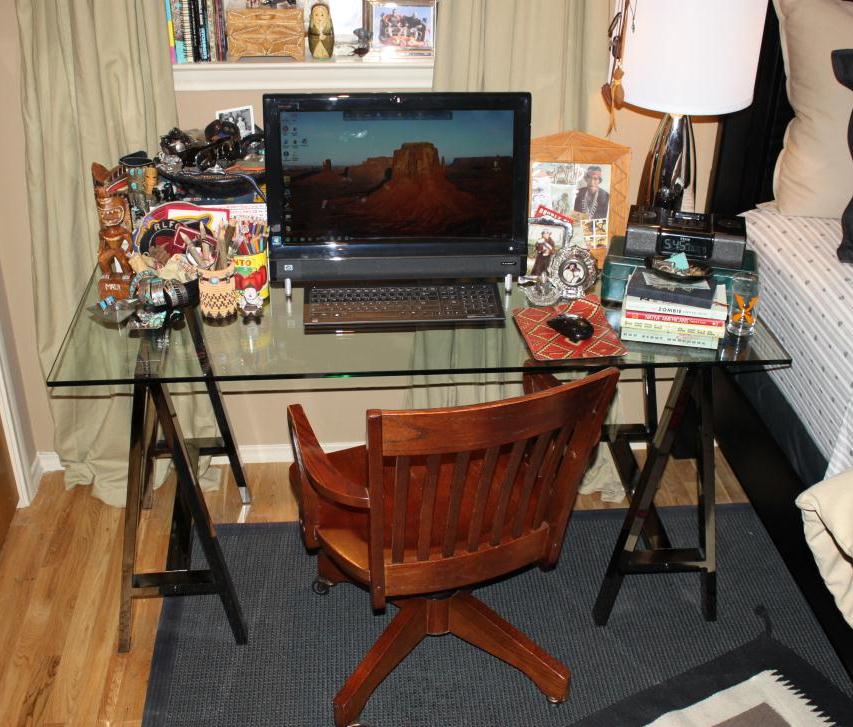 I love my old Breuer chair, but every time I sat in it I felt the leather tear just a little more. It has a new temporary home in the guest room. Since I was forced to dust my desk and all the little pieces on it ( this is quite an ordeal ), I went ahead and made the bed and snapped a few pictures of the Pendleton blanket we picked up in New Mexico last month. It is a little early in the year for wool blankets……..but I’m keeping this thing out so I can enjoy it. Enjoy it we do! 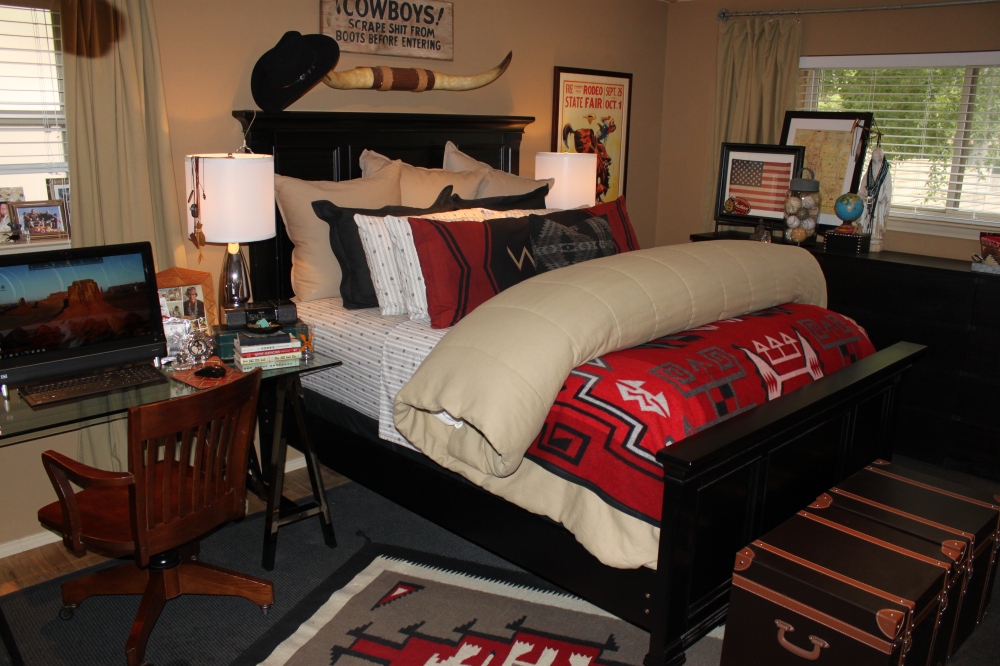 A few years ago, Jamies brother gave me a mounted deer head.. In my old house he lived over my mantel and happily had a wreath around his neck every Christmas…..In this house, he is a little tall for the mantel, so he has a home in the bedroom watching us sleep every night. Here he is in the fez he dignifyingly wears every day ……. 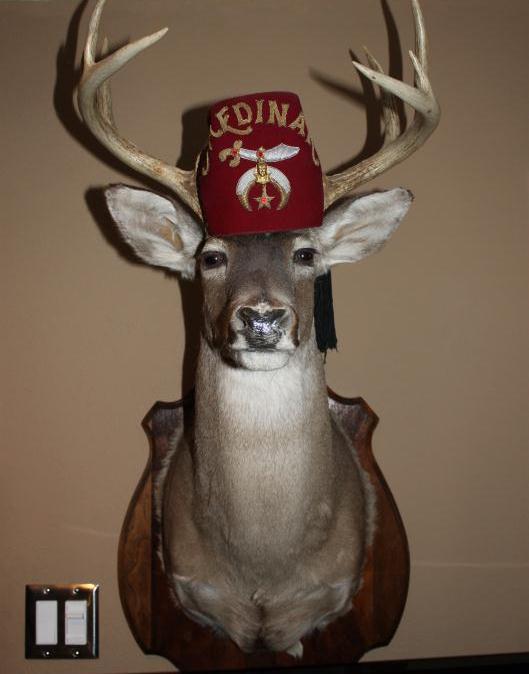 One of the first things we meant to do was build a deck directly off the back door of the house.  There’s a 3 foot drop , and it needs to be a level walk-out extending the living room square footage by double. I have visions of alfresco summer dinner parties surrounded by fireflies, strings of rodeo lights and a candle lit light fixture dangling over the table from a branch with a rope and a pulley……..(AAAhhhhh , someday)  Now somehow we thought this project would cost about 15% less than everyone else did.  Solution…do it ourselves. Jamie even bought a book. And ya know what?…….It’s a pretty big freaking ordeal to build your own 15 X 20 deck. Looks like we will have to wait a while…So in the meantime, Jamie dug up the odd lilies and other assorted  unattractive plants from both sides of the existing 8X8 patio and replaced them with rosemary (heaven) desert sage, furry red grass, and some yellow flowering things we can’t identify. 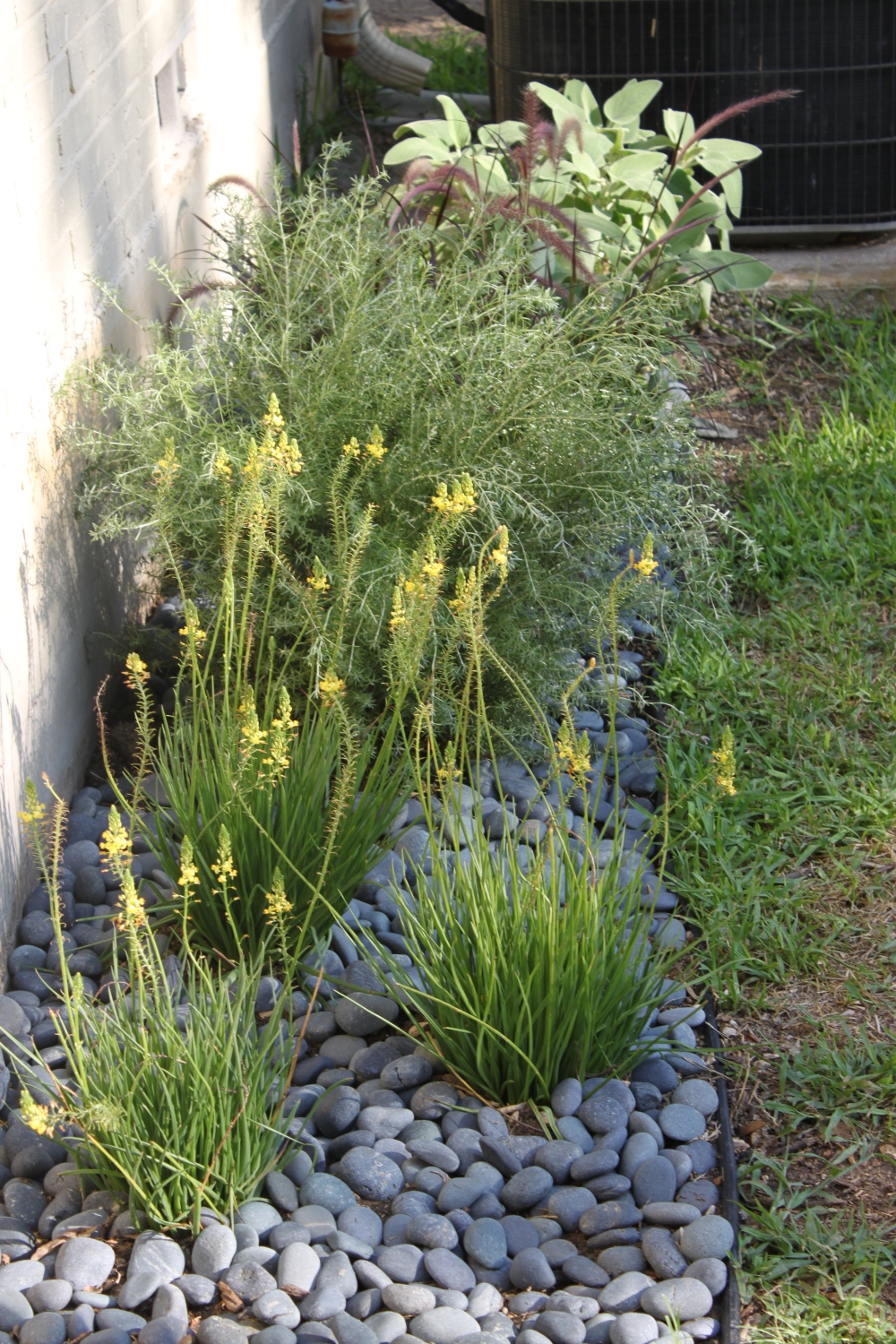 Pretty Awesome, right? I think the river rocks are my favorite part…we are keeping Home Depot in business with all our river rock purchasing……The sage was all soft “sagey” green when we got it , and in just a few days it was covered in those little purple flowers. All the new plantings are pretty drought tolerant, and the lambs-ear was already there…so we know it can take neglect we will give it.

So a few days later we were at the Walls-Mart to buy a new cheap dog bed. We seem to be going through an awful lot of dog beds lately, could be the teething Doberman, or the fact that we keep buying them at Wall Mart……..or a little of both. Anyway, on our way out the door, I spotted this dark brown patio set with khaki cushions and a great X detail on the backs…..and the price, unbelievably $150. Did we buy it? Of course not. I wanted to go home and find something better on the internets. And about 45 minutes later we were back at Wally World getting “Big Shirley” to help us load the unassembled set. Nothing as stylish, and as reasonably priced out there folks.

It’s not perfect, and we don’t plan on having it forever……but for the price. WOWZA!!! Suddenly, it’s not so terrible sitting outside in the evenings while Harley amuses herself with three-fourths of a frisbee in the yard. Now remember that 4 months ago this side of the garage was puke-green too…it’s all just coming together so  soothing and grown-up. The star was a last-minute addition, picked up at the farmers market while we were buying plants for the other flower bed….cost you ask? 30 clams…..

Of course , one project leads to another…and I just couldn’t look and the “prison yard” light fixture next to the back door much longer. No tunneling out of the yard with this thing shining down.

My favorite part is the electrical tape X .....

I had always planned on replacing it with the same one on the front patio….Only one small problem, Pottery Barn has them on backorder until late August. Good thing I am familiar with eBay…..I found 1, and it was waaaaay cheaper than ol’ PB was asking.   5 days and a five-minute install later ( yeah, I’m that good) it looks like this …..

Way. more. much. better…. The chocolate-brown outdoor rug was on clearance at Target (second greatest store in the world, after Ikea) and while we were there I found 4 brownish outdoor aluminum dining chairs for 12 bucks each… they are being stored in the garage for now…….because I still haven’t let go of my vision of outdoor dinner parties on our enormous wooden deck…..and I plan on being ready.