For the past couple of days I’ve been numb.

A dear friend of mine died in his sleep over the weekend; possible heart complications. To say that it was unexpected is a severe understatement. People talk about being struck by a ton of bricks…..this was a fucking pallet of grand pianos.

I met Tim at Texas Tech during a fall rush party when we were both in our late teens. It was during those formidable years when we were both still trying to figure out where we fit in this world – the suburban straight world we’d each grown up in…and were still living in. Tim was all round face and a booming personality. He was loud. And when he got excited, he was even louder. We hit if off immediately talking about dance music, Polo ties, and Molly Ringwald movies and he quickly became my “Rush Baby” (the one guy that I was determined to snatch away from the other frats). I did too. In early December of 1989, Tim became more than a friend; he became my brother. I knew we were both alike, surrounded by all that masculine “bro” energy of a fraternity only brought us closer together. While the other guys were doing keg-stands, playing volleyball and chasing the poon’, we were thumbing through GQ magazines and shopping for Clinique. Although we never talked about it, I knew we both shared the same big secret.

There was a code in the music we listened to. Queer pop was suddenly main stream; the Pet Shop Boys, the Cure, George Michael, the B52’s, Depeche Mode, REM and especially Erasure. Tim was a fanatic for Erasure. What he didn’t dare say out loud…..his choice in music did for him.

I left school before he did, our lives shifted and we didn’t talk for about 25 years.

A few years ago Tim found me on Facebook and met me at my hotel bar one night while I was working in Houston. I had a couple beers, he nursed a Diet Coke while we caught up. We talked about music and how our favorite groups were still touring. We talked about our families. We talked about the car wreck that changed his outlook on life. How we had both battled with depression (his caused him to balloon to over 300 pounds and the day he decided to change that.) We talked about some bad choices we’d each made, and a few good ones, ex’s who had taken advantage of our kind natures – and how I’d finally found the man I plan to spend the rest of my life with, jobs lost, opportunities taken, and mostly the comfort we each found in finally being our true selves.

Even apart for all those years, our journeys towards discovering who we really were had been strikingly similar.

And now we were both gay middle-aged survivors of our 20’s and 30’s slowing down slightly and creeping towards the big Five-O without a need to pretend for anybody anymore.

Tim moved to Dallas a few years ago and although we weren’t in constant contact we’d get together every few months for a steak dinner or a birthday; maybe a movie. He would text me almost daily, usually snarking on things our crazy frat brothers were posting on Facebook or just because there was a song playing that he hadn’t heard in 30 years.

The last time I saw Tim was on Christmas Eve; a big night for me when I open my home to the people whom I’m closest too in my life. We talked for a while in front of the fire, and as usual, he was one of the last to leave; by then it was technically Christmas morning. We hugged at the door, he wished me a “Merry Christmas”, and I never saw him again….

Cue that pallet of pianos,

You will be missed….

This is for you.

In honor of the Academy Awards this evening,

Have I got an idea for you.

“100 Must See Movies” have been expertly conceived as a scratch off poster. 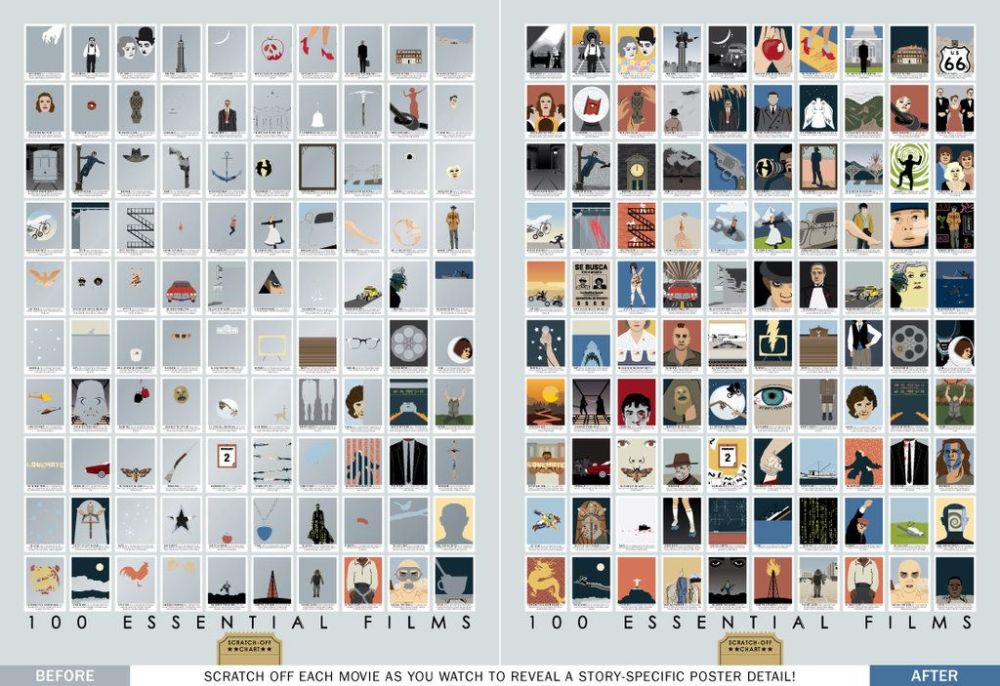 After you watch each film, simply scratch off the top image to reveal all the details.

It’s kinda hard to believe that Star Wars and Gone With the Wind didn’t make the cut (2 of my absolute favorite movies) but they obviously didn’t consult with me.

So, if you love watching classic movies…

And you love documenting them scratch-off lottery ticket style…

Then this is THE poster for you.

Get yours today from Pop Chart Lab.

(This is not a paid advertisement, but if the Pop Chart Lab people are pleased and want to thank me for the unsolicited endorsement…..one of these posters would work very nicely)