I Know, I know…..This is hardly a unique idea.

So y’all will have to just bear through this post…….. and pretend it’s something Mind Blowing.

The door from the garage into the kitchen has been a thorn in our side for a few years now. It’s cheap, thin, someone cut it too short…..and when we open the refrigerator door it hits the doorknob. We’ve planned to replace it with something with a window, but until that happens we had to come up with a cheap solution to make it more attractive.

Just look at this “War Zone” we had to start with. (those light switches, BTW, used to be on the other side of the wall, BEHIND the refrigerator)

After completely covering our garage walls in fencing cedar, the hollow core door to the kitchen seem a little off. 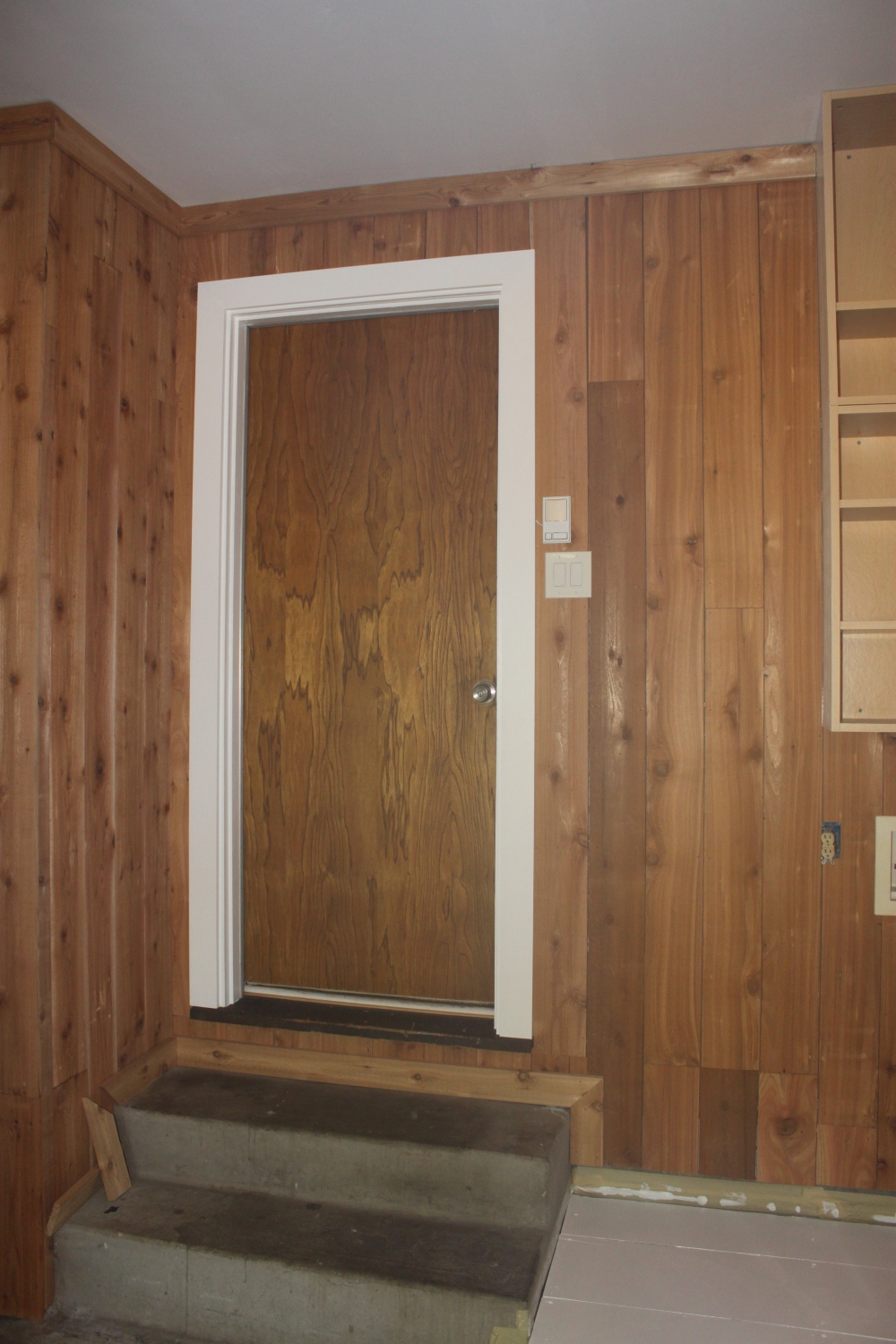 It certainly looks more impressive with the thick white trim around it. But something about those 2 different wood grains. The grain of the wall cedar and the grain of the door veneer just weren’t gelling for us.

Maybe if we paint it.

We had plenty of chalk board paint left from the chalk board globe we made a few months ago. So, “chalk board black” it is. (If you don’t know this, chalk board paint comes in a variety of colors. Don’t limit yourselves to just black like we did. Branch out a little, Try red, or green)

Jamie popped the door of its hinges, removed the knob, and frog taped the edges for a clean edge. 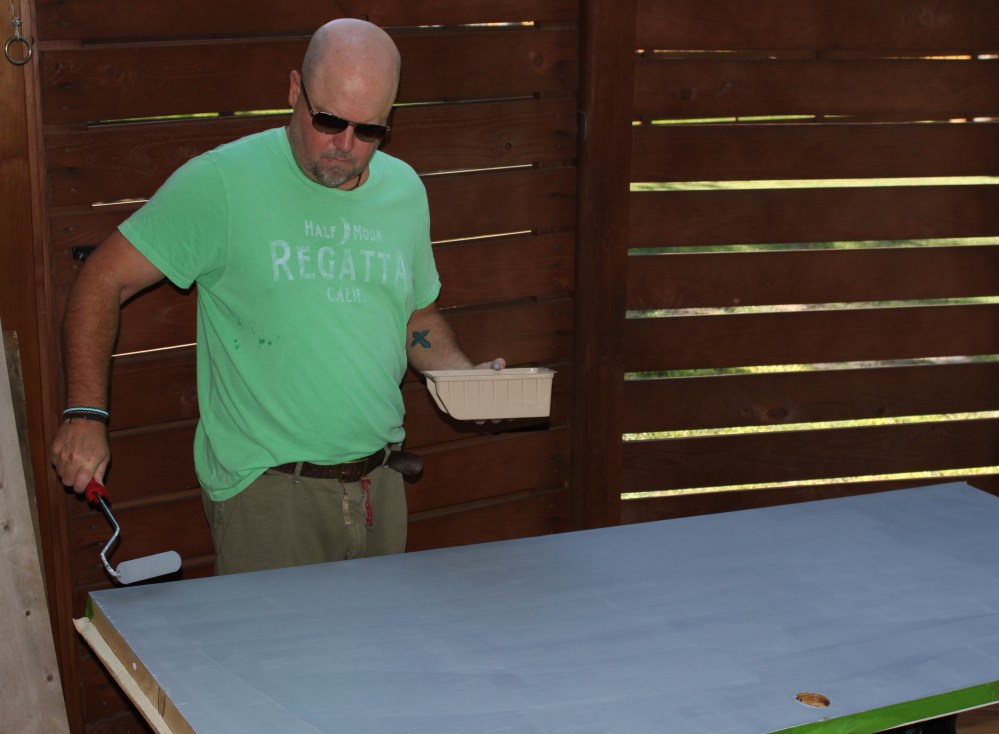 And at least 6 coats of black chalk board paint… 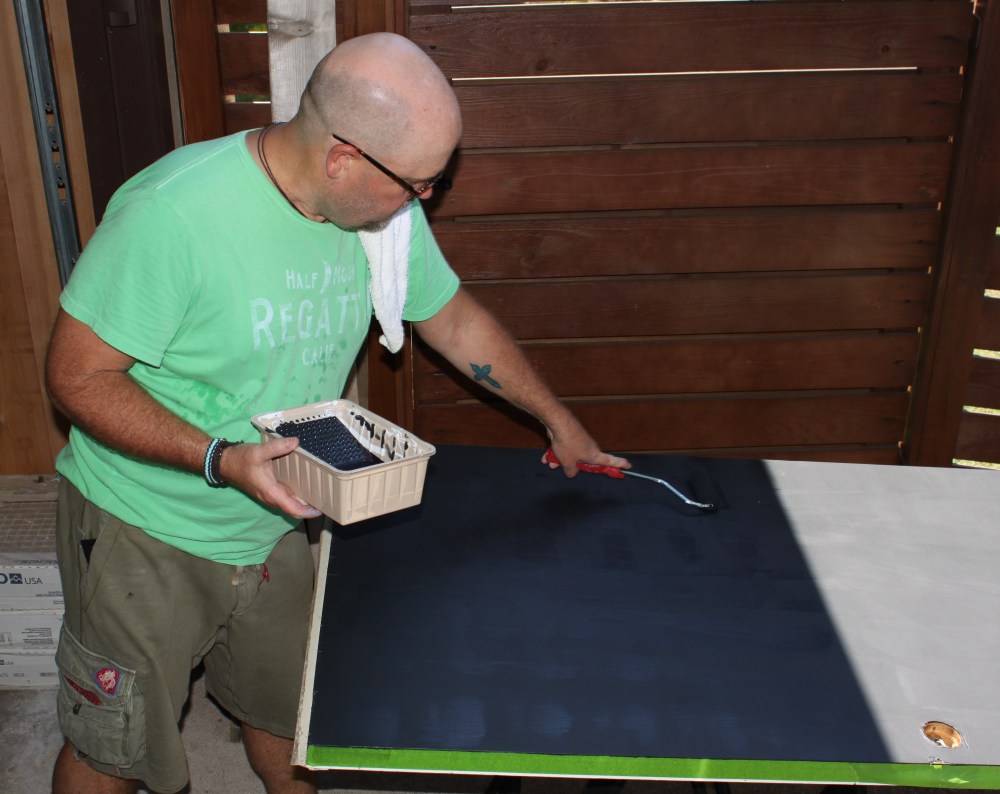 Each time he did a new coat, he painted in a different direction.

Now, if we only had an idea of what to write on it,

BUT we did have an idea.

Bourbon is Sunshine mixed with Love and Genius 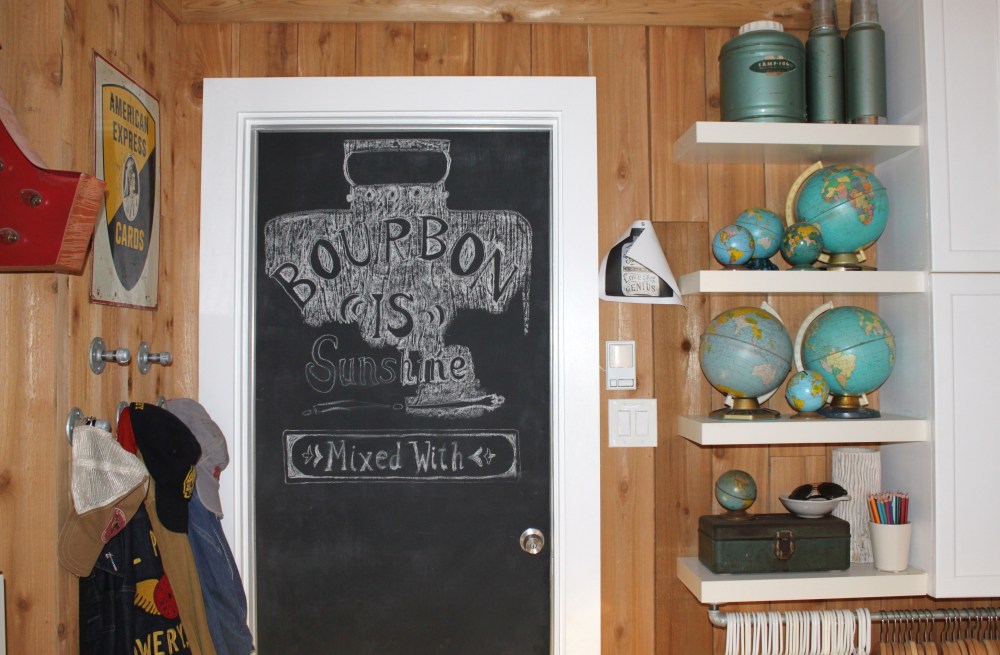 and, ya know what?

We weren’t really diggin’ it, We can’t quite put our fingers on why, but everything “Doberman height” kept getting rubbed off. HHHmmmmm, that is perplexing.

We liked it better when it was just chalk-boardy black anyway. 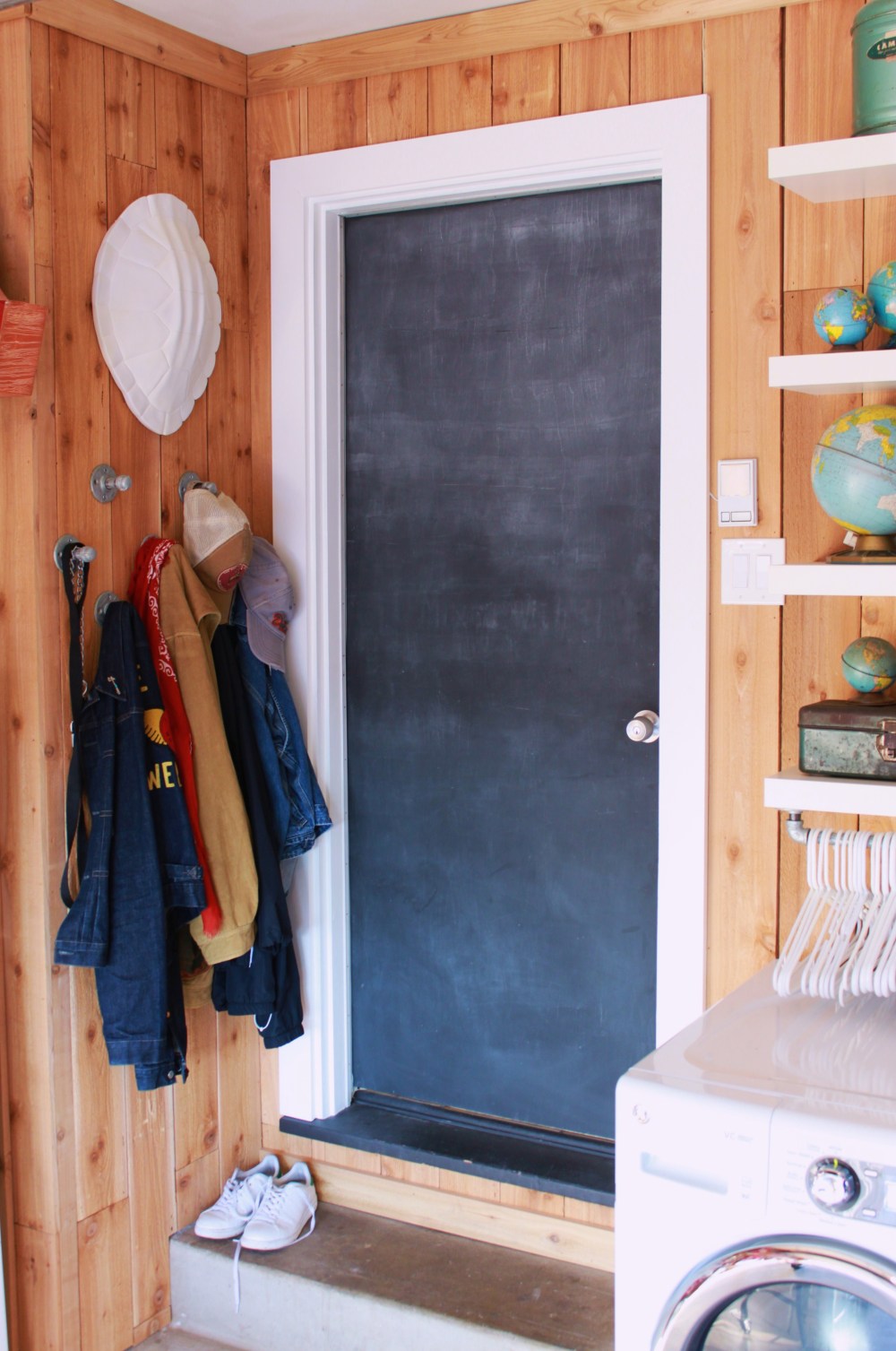 Look What I Found

Jamie’s brother did. And how awesome is he? When he spends time at his cabin in West Texas, he finds these naturally shed antlers just lying on the ground.

For a couple of years now , I have kindly asked him to grab a few for me….and boy did he. 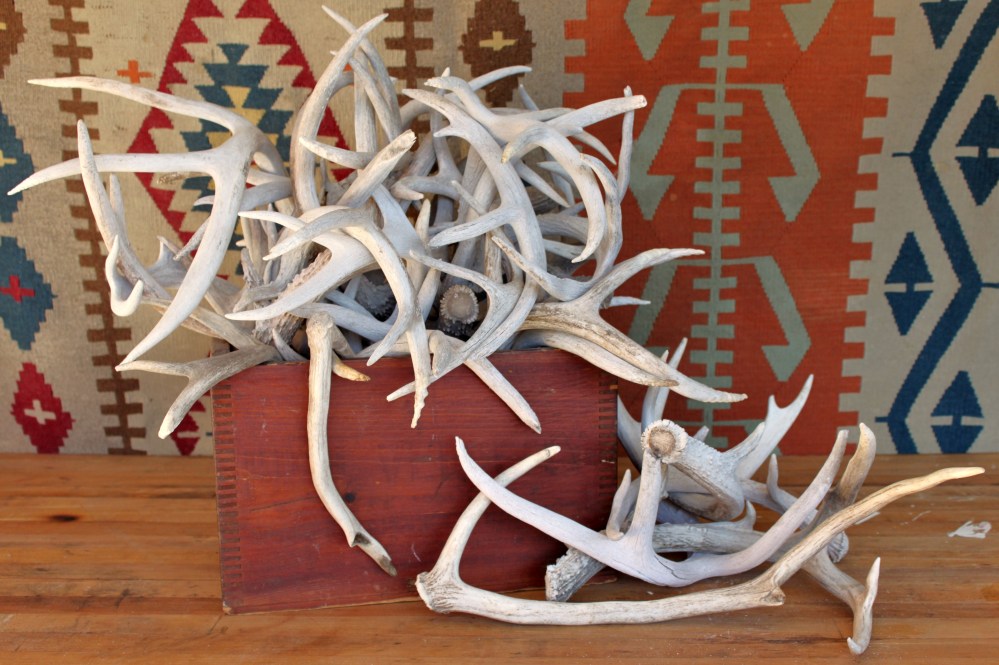 Now, What do do with that many? (After I share a few with our dear friend Tom, who will never read this anyway)

How does this look? 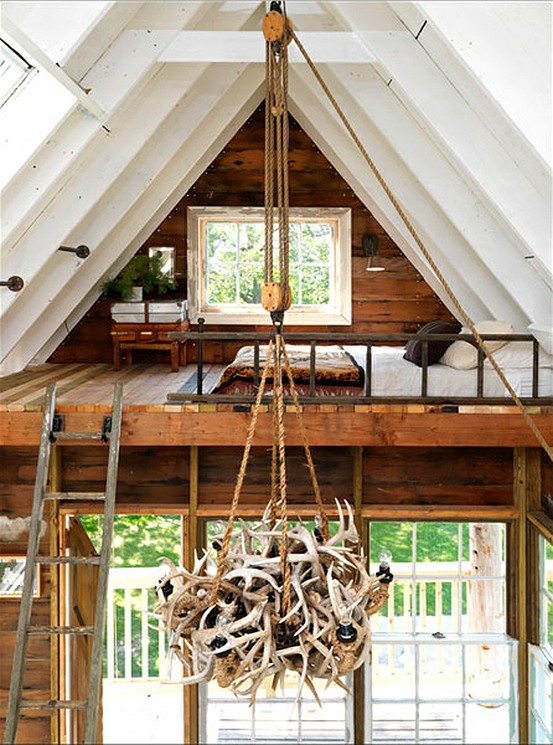 Even I think that might be a bit much…..

The pulleys, the rope…those Edison-style light bulbs…..sounds right up my alley.

Stay tuned. I know that something “Bad Ass” will happen with them.

The History of the Hudson’s Bay Point Blanket 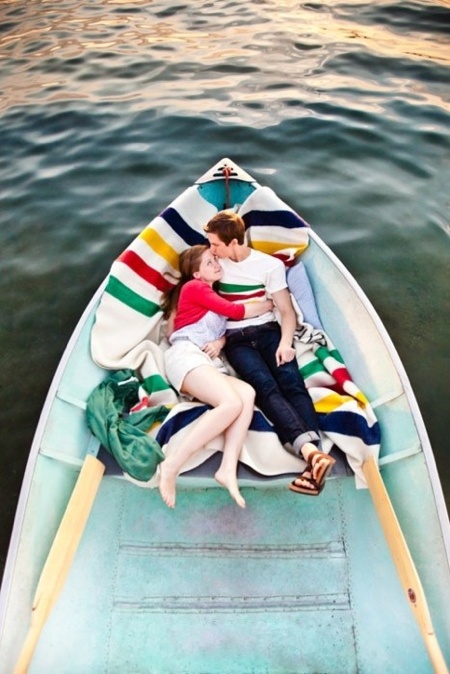 These stripped blankets were created by the Hudson’s Bay Company in the Northern part of North America in 1780. Typically, the wool blankets were traded with Native Americans for pelts; arctic fox, lynx and most importantly beaver.  The beaver pelts were shipped to Europe to meet the demand for beaver fur top hats. (I know, I had to read that twice too) Not just pelts, the blankets were also traded for buffalo robes, pemmican, moccasins, and other trade goods. Native Americans prized the blankets because of their ability to hold heat even when wet.

Because they were easier to sew than bison or deer skins, Point blankets were made into hooded coats (called capotes) by both Native Americans and French Canadian voyagers and were perfectly suited to the cold Canadian winters.

To this day, clothing manufactures are still making coats and jackets from, and inspired by, these awesome blankets. Even Jamie has a toggle sweater from Rugby that he wore to meet the Young House Lovers a few months ago.

Although woven in a handful of background/stripe colors, the “favored” look of Hudson’s Bay Point blankets are the ones produced with stripes of green, red, yellow, and indigo on a creamy white background. The stripe colors were chosen simply because they were easily produced at the time with colorfast dyes. They have always reminded me of a cheerful roll of Life Savers candy. The large stripes woven at the top and bottom of the blanket are called “Headings”. But more importantly, there is a series of small 5-6 inch lines woven in the side of the blanket called “points”.  It’s these points that identify the size, weight, and of course the value, of the blanket. (Not it’s value in terms of beaver pelts, as is sometimes believed) These could be “read” without unfolding and measuring the entire blanket. Pretty clever, Right?

Each blanket was graded as to weight and size using a point system. Points were identified by the indigo lines woven into the side of each blanket. A full point measured 4 – 5.5 in.; a half point measured half that length. The standard measurements for a pair of 1 point blankets was: 2 ft. 8 in. wide by 8 ft. in length; with a weight of 3 lb. 1 oz. each. Points ranged from 1 to 6, increasing by halves depending upon the size and weight of the blanket. The number of points represented the overall finished size of the blanket.

Remember when we covered that chair the previous owner left in the garage with military blankets?

I am an absolute fanatic for mid-century teak furniture with cushions upholstered in these old striped blankets. These pieces were all available from Sit and Read in Brooklyn. 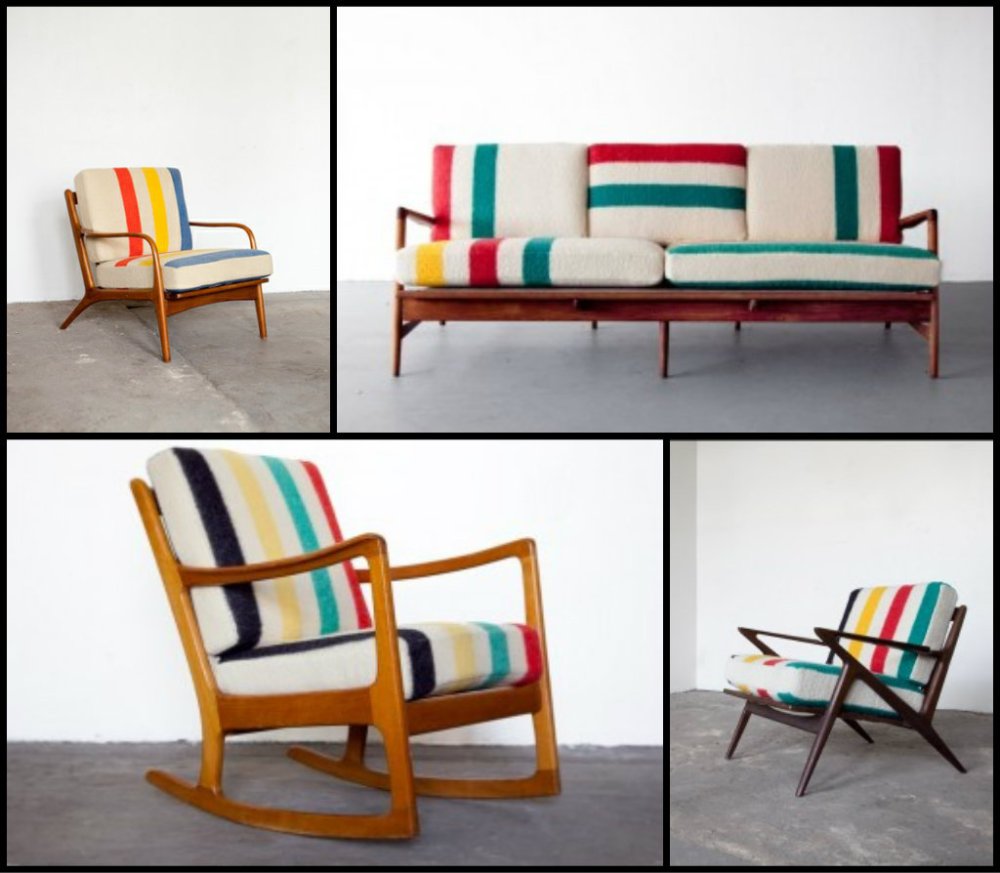 They have that perfect mix of relaxed/formal; comfortable/modern; ….. little bit “country” and a little bit “Rock-N-Roll”.

But who would have though to use them as window coverings?

Now that I have y’all in a feverish frenzy to buy one…….here’s where you can,

Genuine Hudson’s Bay Blankets continue to be sold by Canada’s Hudson’s Bay Company, and are available to buy from Woolrich. There is also a version made by the Pendleton company, refered to as “National Parks Blankets”, but these blankets are not true Hudson’s Bay and most importantly are lacking the points on the sides.

Without the points, how could anyone possibly know how many beaver pelts they are worth?

Taxidermy around the House

Or, maybe it’s a “Texas” thing….(it’s pretty common in the South)

But I have a fascination for living surrounded by dead things. Like, a serious fascination.

Not in a serial killer kind of way, more like a Victorian cabinet of curiosities…..

You know, like a wing at the Museum of Natural History.

And who wouldn’t want to live there? 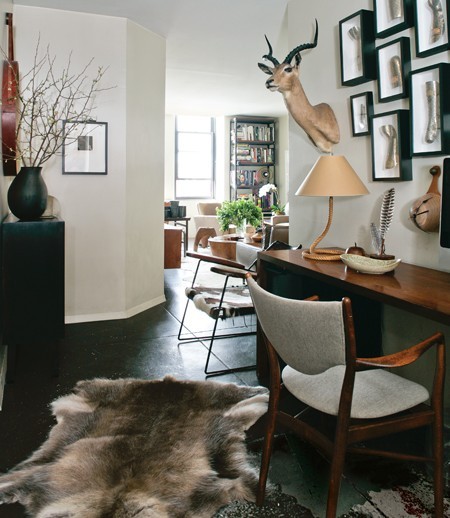 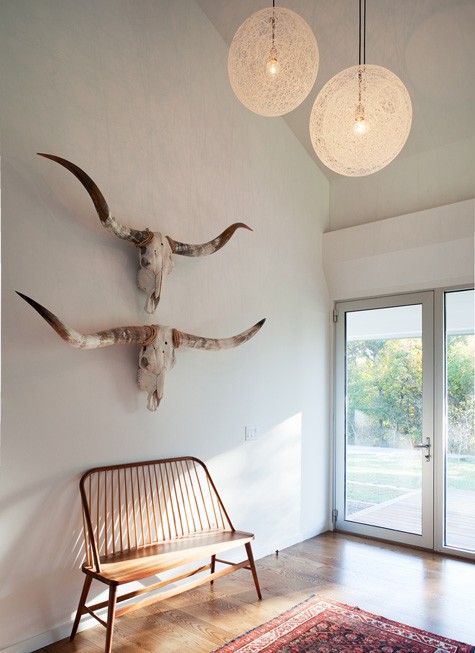 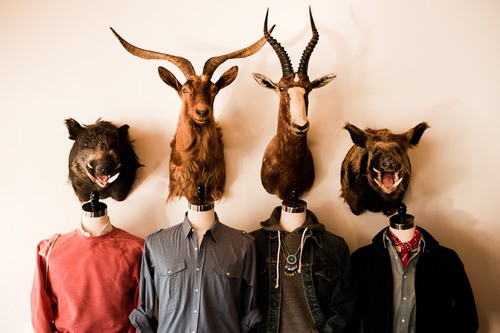 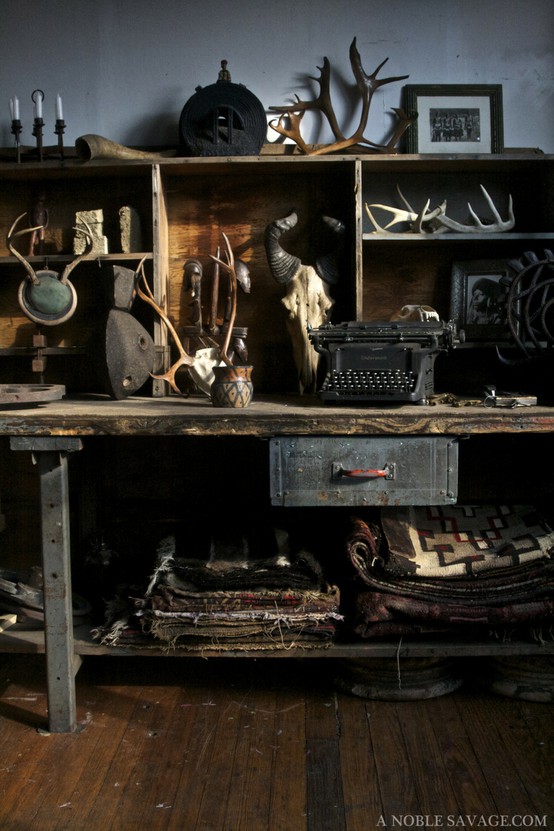 This look is not for everyone, that’s certain.

Turtle shells, turkey feathers, segments of blue songbird eggs, snake skins and all the other things that I brought home as a young boy have evolved to more “adult-like” proportions.

…..and what could be more wholesome?

One of the few fun parts of working in creative services for a retail company is “sourcing”.

On a recent sourcing trip I spied a handful of things worthy of adding to the inventory of crap in our own house.

Here are a few of those beauties.

At Lula B’s West on Riverfront Blvd., I noticed these “inspired by” Wassily chairs. Dig the style so much, and $295 each seemed like a fair price. 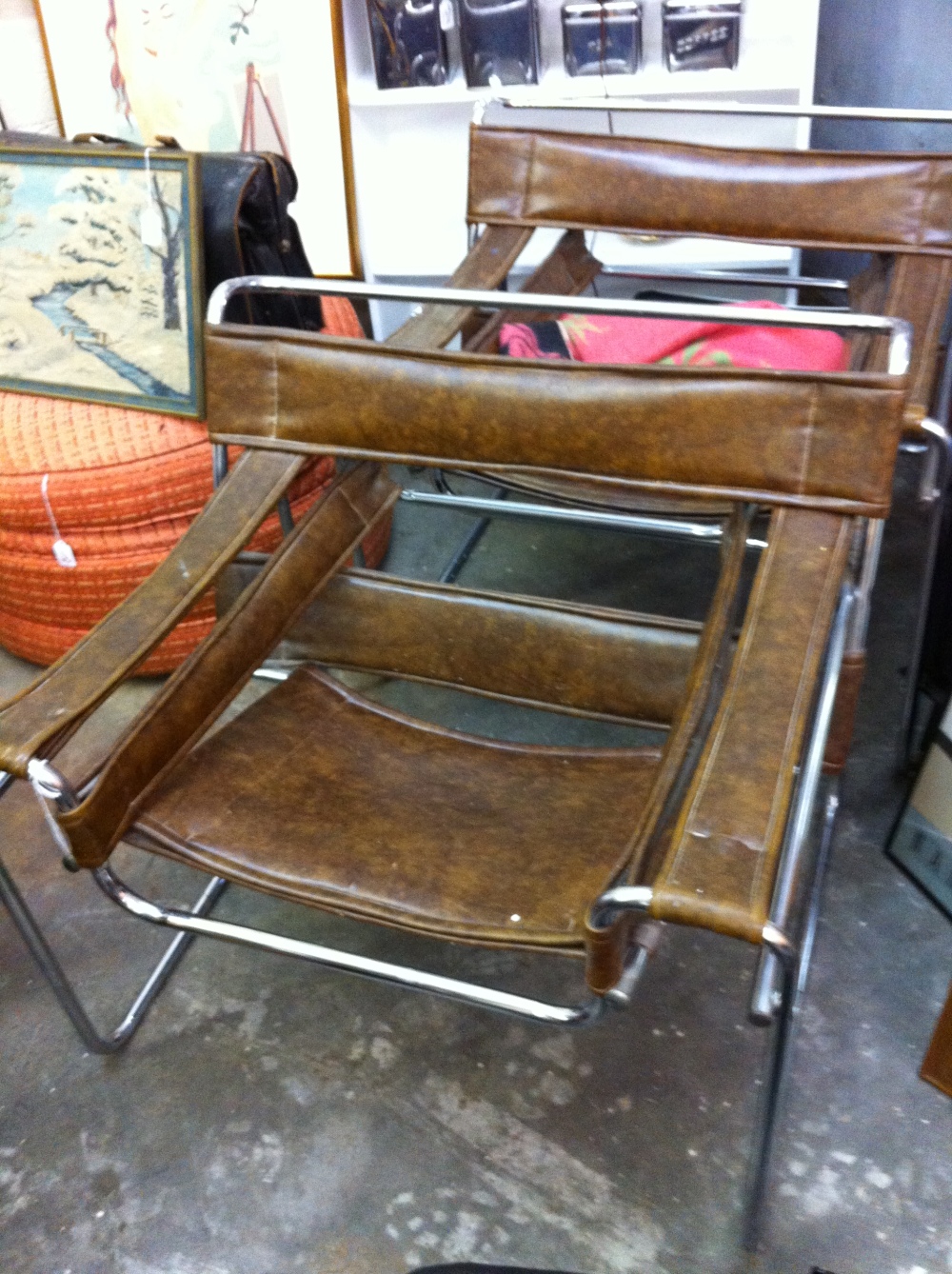 Next door at White Elephant Antiques, I was immediately drawn to this water-color of a Sioux Indian. The frame is a little heinous, but for $149 it would make an awesome addition to some lucky person’s decor.

I couldn’t decide if this sign was genuine or some kind of Pottery Barn repro. It was certainly weathered enough to look “real”. This one was almost $300, about 10 times more than I’d want to pay for it…but still pretty cool.

I have wanted one of these metal military globes for years, and the prices are always WAYYY out of my comfort level. I couldn’t see that tag (if you have to ask, you can’t afford it)…so I will just assume it was just slightly over $800. OUCH

This very cool, extremely Mass-produced looking, orange metal stool was near the exit. $95 seemed rediculous……but has certainly inspired me to attempt making our own version. HHHMMMM, wheels are turning now. 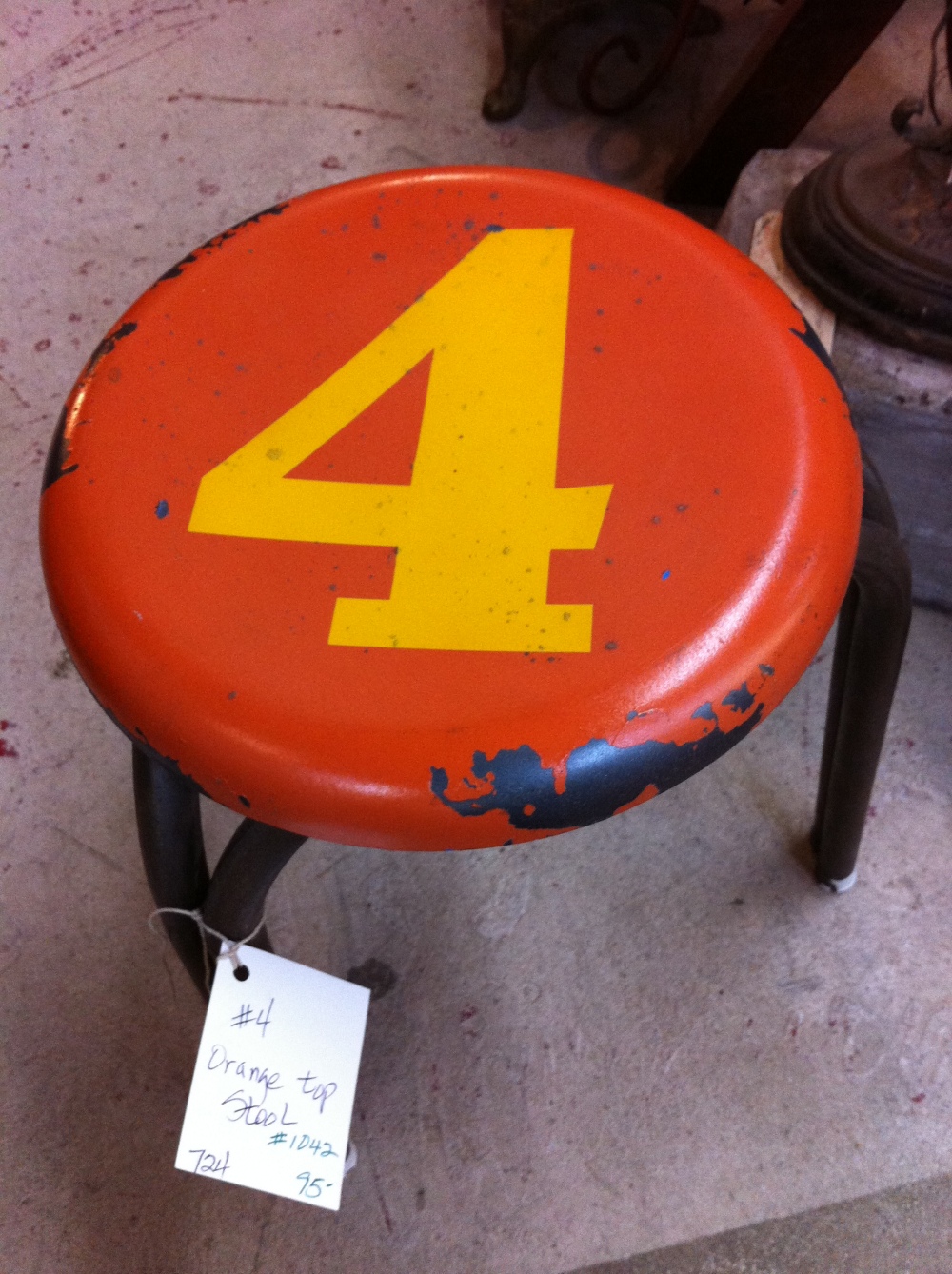 I also hit Nadeau Home, a warehouse filled with Indian imports. It’s always a surprise what we find here, because they never have the same inventory for very long. Because it’s a warehouse with absolutely No distracting decorative……the prices are extremely sensable.

I’m kinda crazy about this cast-iron table with the hand crank to raise and lover it. Very “Steam Punk” and “Vintage Industrial”. I’ve never seen anything like it. The top was a little small for a dining table, but could easily be covered in a big wooden disk. $495 is still a little high, but about a third of what the Pottery Barn version would be. 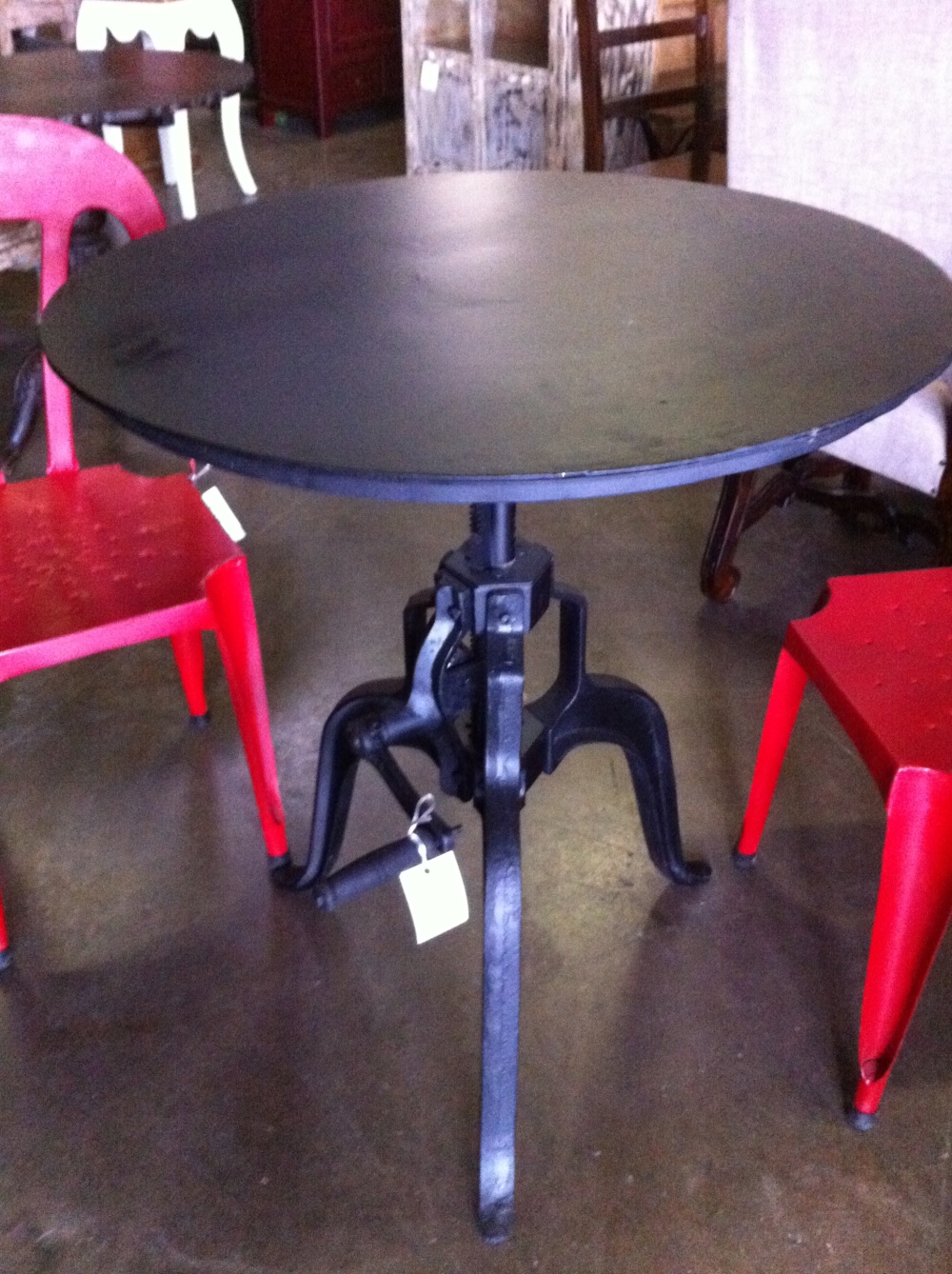 This light weight red metal cabinet was pretty cool too. It reminded me of boxcars, the door closes with a big bar that slides up into the closure…and on working casters even. 2 or 3 of these would be great in a our garage. Much more attractive than open shelving. $495 seemed pretty reasonable for something unique that not everyone and their mother would have. 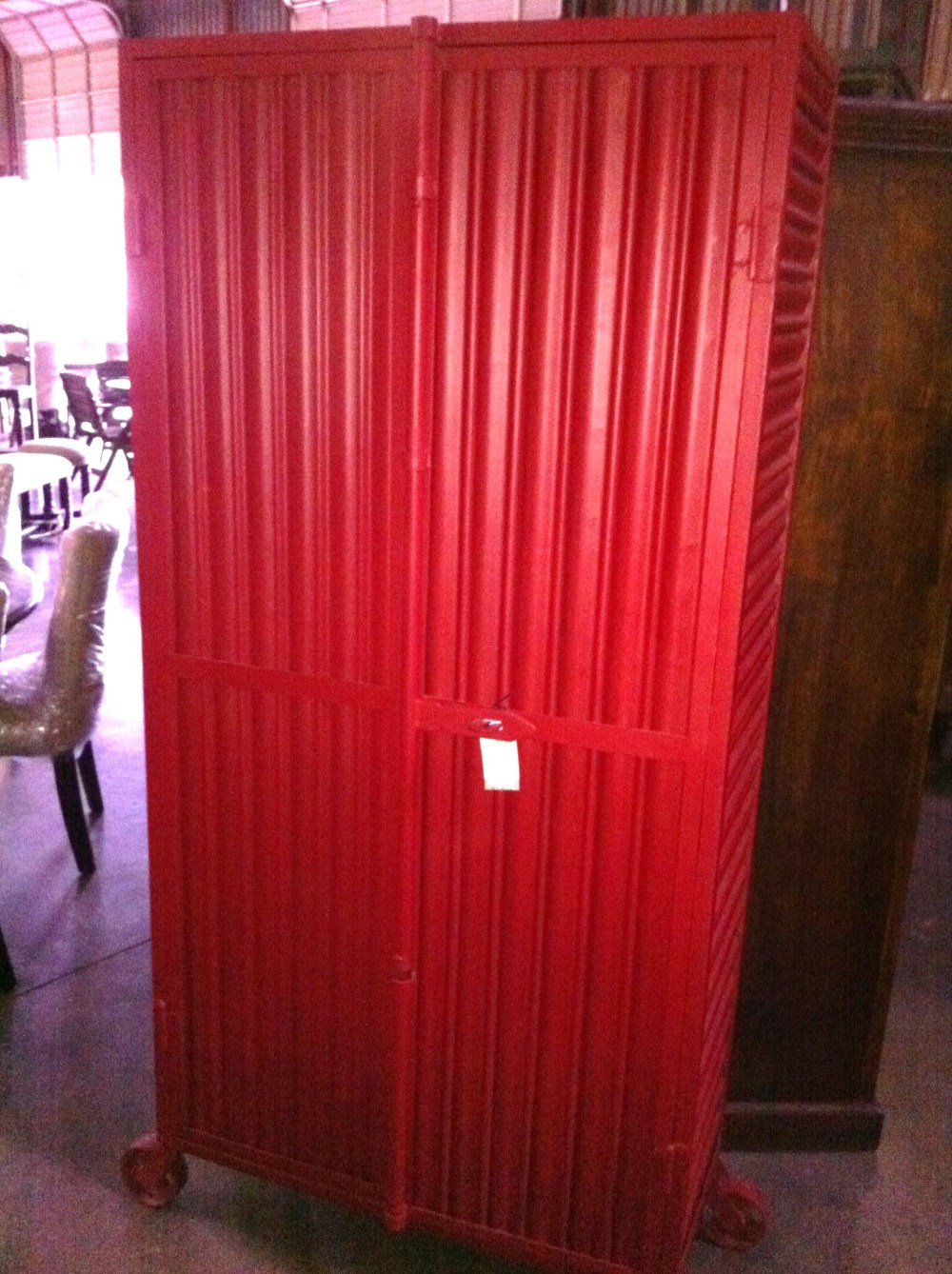 So there are a handful of things that sparked my interest recently.

“But did i find any of the things that I was ‘sourcing’?”

Can’t imagine why. I was obviously very focused. 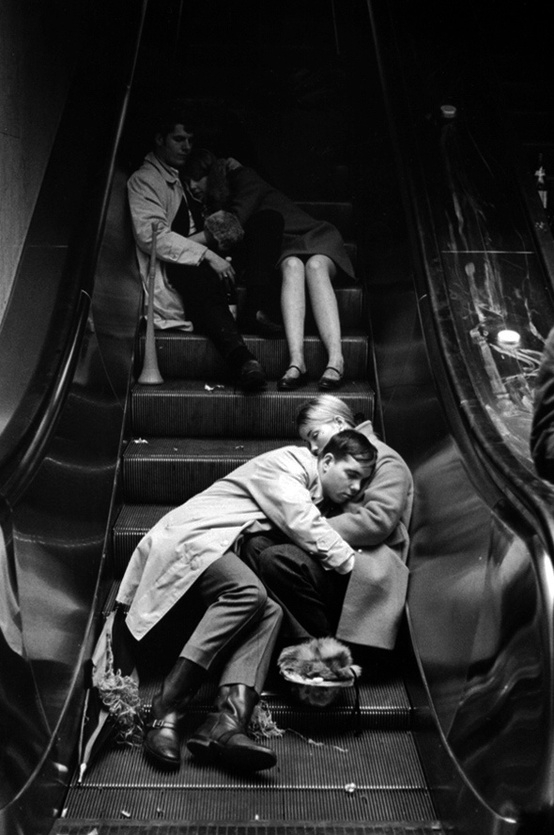 We’re hoping that none of y’all woke up on an escalator in Grand Central Station this morning…..

Bless your heart if you did,