January 8th is a pretty magical day for birthdays.

Elvis, David Bowie, and most importantly, my beautiful god-daughter Alix.
This is her on a visit with me about 13 years ago. 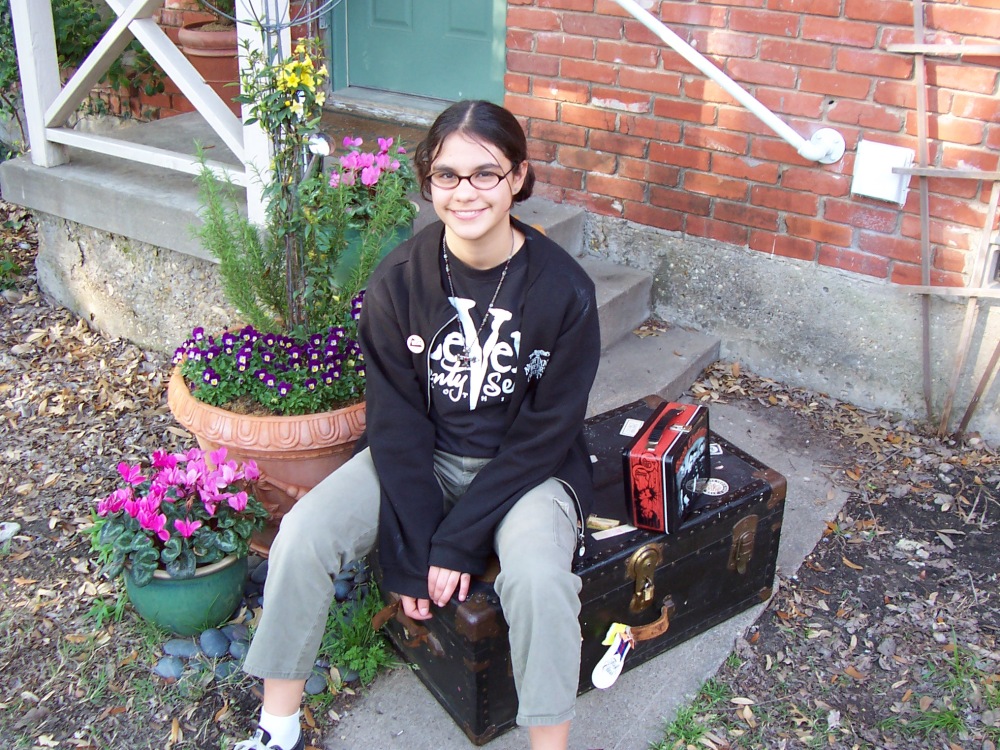 Hard to believe that I was barely 21 when she was born. The first time we met – her father had called me at 4 am to scream “It’s a girl!” – I arrived at the hospital just in time to see “Nurse Ratchet” pushing her down the hallway in a cart that read “Baby Girl Donahew” on it. I followed that cart, making goofy faces, all the way to her Mother’s waiting boob.
Good times.
Alix’s parents, Lenny and Sandra, are very dear friends of mine from college. Always will be. Lenny and I share a bond as fraternity brothers. He will tell you that he is the only reason that I pledged. But that’s simply not true, I liked all the other guys in the chapter too – he and I just had an instant “fashion” connection. Sandra and Lenny met at prep school a few years earlier. I know this is a loose, loose reference……Very loose…..but I always felt like the backseat Hemingway to their F. Scott and Zelda. (Minus all the alcoholic narcissism, of course.)  In our crested blazers and Weejun penny loafers, the three of us were our own version of the Algonquin Round Table –  the wittiest people who any of us knew – at the Lubbock, TX. IHOP at 2 in the morning.
At the beginning of their final year of college, when Sandra was still very pregnant with Alix, early September – so about 6 months into her, they stopped by my mother’s house for a visit. They were in her neighborhood because classes had started at the University of Dallas but the apartment they were renting wasn’t available yet and they were hoping to spend the night with our mutual friend Crazy Grace.
“Why don’t you stay here until your apartment is ready?” my mother graciously offered.
They could share the sofa-bed in the office. What could possibly go wrong? Only a day or two. Right?
It just so happened that their Saab in the driveway was already packed with all the possessions they intended to bring to their new apartment. Including; a couple dozen first edition books, a zebra hide, new sheets with a higher thread-count than our humble guest bed had to offer, a complete sterling tea service (for high-tea at 4 pm, of course), a steamer trunk stuffed full of just sweaters, and a pair of chinchillas aptly named Ralph and Lauren.
It started well. My mother made them lasagna from scratch because, well, it was Lenny’s favorite. Never-mind that the pair ate most of their meals at 11:30 pm. Fresh towels, a refrigerator full of Cokes, and full laundry service.
My mother, like most baby boomers, was raised to be an accommodating hostess and make her guests comfortable.
Maybe a little too comfortable….
About 6 weeks later she called me in a state of panic. I could hear her smoking on the other end of the phone line. The 2.5 of them were still living with her….their apartment still wasn’t ready yet. “God Damn it, Jim” she says, “They drank all the God-Damned orange juice again.” Not that I’d ever seen my mother drink orange juice. “And I’m worried about Sandra. A pregnant woman needs proper nutrition”
“Well, it sounds to me like she’s getting plenty of vitamin C”
No response from my mother……. just an exhale of smoke.
“He spends hours in the bathroom. Every day.” I was already aware of Lenny’s long baths; he likes to lay in the tub reading those first editions.
“I’m not sure it’s safe for an expecting mother to be exposed to vermin.”
“They’re not exactly vermin, Mom. They’re chinchillas. Like hamsters with pedigrees.”
Again, no response. Just a long, sharp, deliberate inhale.
“I’ll talk to him.”
I knew that their orange juice guzzling, bathing rituals, and exotic pets weren’t the real issues….and it didn’t matter at this point. It was simply that they were still there, and she was over having house guests. But she couldn’t just throw a pregnant woman out on the streets now could she? (Not as a good Catholic she couldn’t.)
“Lenny, did you, by any chance, drink all the orange juice?” I tried to casually slip into our next phone conversation.
“Well, yes……but I bought the orange juice”
Dead end. Maybe I should be more direct.
“How much longer do you think it will be before your apartment is ready?” I prodded.
“Well, that’s the thing,….(Pause)…. the leasing agent called me today, and it may be a few more weeks.”
Weeks? I was stumped. But what could I do from 350 miles away? They were officially squatters now.
My mother finally set them down, at High Tea, I think, and simply explained that she was worried that if they all continued to live together, she didn’t know if they’d be able to remain friends.
That was all the push they needed. No one wants to lose friends. The two of them accumulated their steamer trunks full of sweaters, hardcover books, live vermin etc. and moved in with Lenny’s Aunt Diana in Ft. Worth……a good 45 minutes away.
But not before they left my Mother a “Thank you”. Not flowers, not chocolates…..not even a Hallmark card. Hold on for this one, Lenny replaced all the switch-plate covers in her house with brass ones. Honestly, he did.
When my mother sold the house a few years later I asked her if she wanted me to collect them……and she just rolled her eyes.
I think that every time she turned on a light, it just reminded her that there probably wasn’t any orange juice.
Anyway, Happy Birthday Alix.
(Holy Crap Sweetie! Are you 27 already?)