New has never really appealed to me.

I have friend that actually believes that she should always be the first person to live in a house. Or own a car. Or a leather jacket.

Where’s the fun in that? Old things have patina, history, charm, and a character that’s all their own.

“New” doesn’t have any of those things…..not by a mile.

Vintage Christmas decorations have something even more special because they were a part of someone’s holiday celebrations for decades. Each and every item was lovingly wrapped in tissue, boxed, and stored in an attic/drawer/garage until that special moment for a few weeks out of every year when it could shine. Usually these pieces were even passed down through generations.

It’s this history that’s sadly missing from the decorative assortment at your local Pottery Barn. etc.

It’s been a non-stop avalanche of accumulating old Christmas decorations for the past 30 years. These things come from garage sales, trash piles, eBay, thrift stores, and gifts from friends. (In fact, most everyone I know is aware of my obsessive tendencies, and has, at some point, contributed to it. “These used to be my grandmother’s,” hands me a shopping bag full of old glass goodies,” No one in my family wanted them, but I knew that you would.”)

Here’s a few of the random far-from-valuable vintage Christmas things I’ve accumulated over the decades. 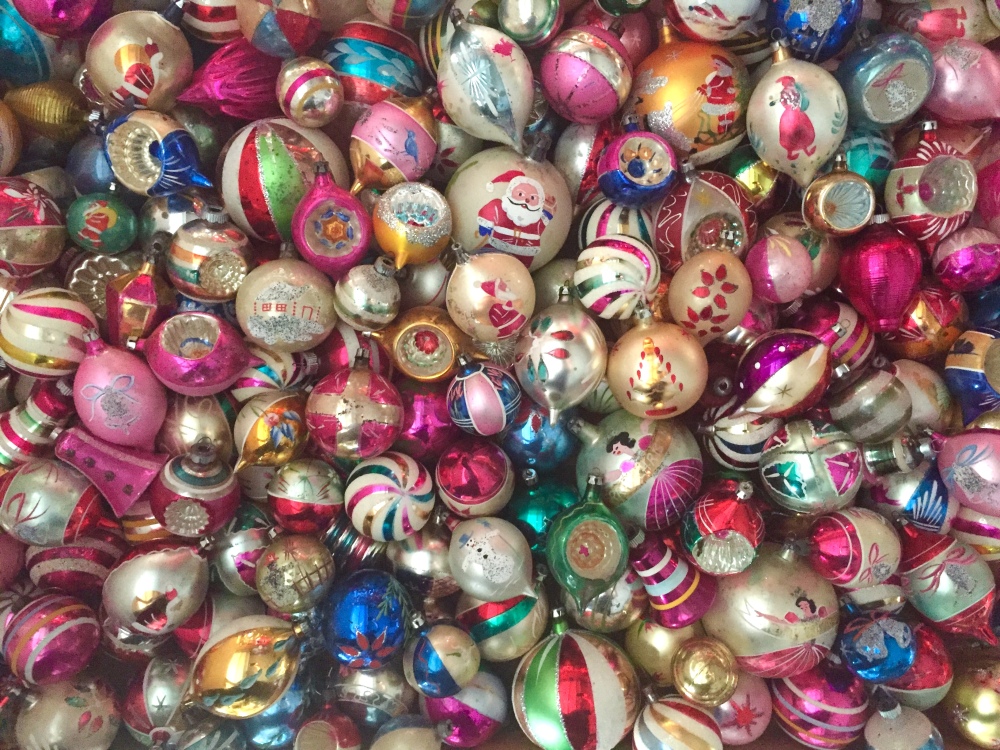 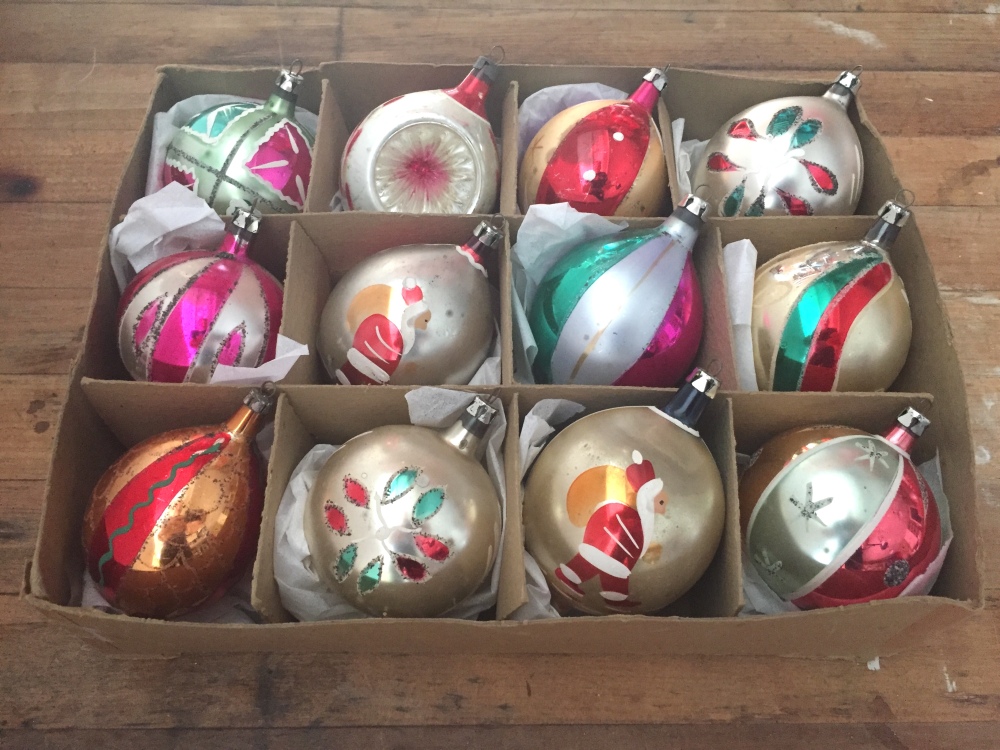 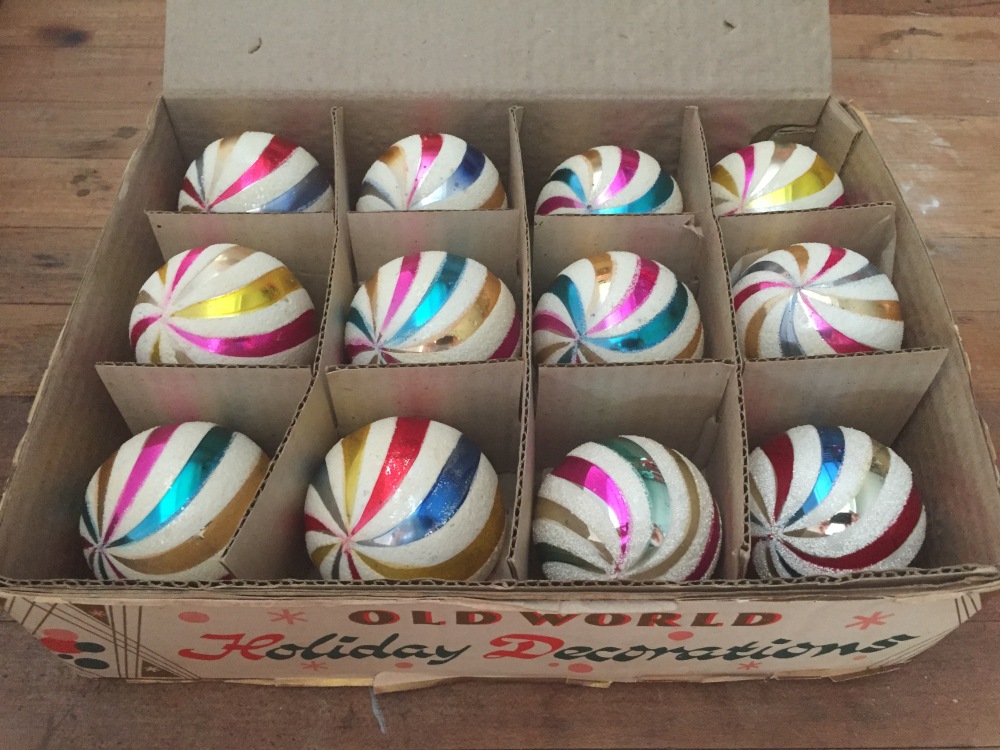 I know that I’ve already told the story of the first Zip-loc of old Polish glass balls that I scored at a local thrift store. (I passed them up, and returned a full week later to find they were still there. Kismet. They were meant for me to have.) But have I ever mentioned the stockpile I found in a dumpster soon after that? Well, I did. About a hundred weathered, beautiful glass balls that someone in my apartment complex had grown tired of. Can you imagine? These things just seem to find their way to me. Mostly Polish, from companies like Fantasia Glass but there’s quite a few American Shiny Brites too. I have more old glass ornaments than I care to count now…..or could possibly display.

And I still cherish every one.

There’s no denying the complete charm of these vintage lights. My star, which made it to the top of the tree this year was made by the Noma company probably in the 1950’s. My Santa is also from the 1950’s and was manufactured by the Glolite company. He works equally as well as a topper, wall hanger, or just resting on a table top. I got him from another member of my Christmas Support Group. It’s kind of like a 12 step support group, except instead of saying, “Take it one day at a time,” they say things like, “What do you mean you only have a 5 war-time Shiny Brites? I have 5 dozen……in the original boxes.” So I end up with 6 different tree toppers, and only one tree that requires a topper. 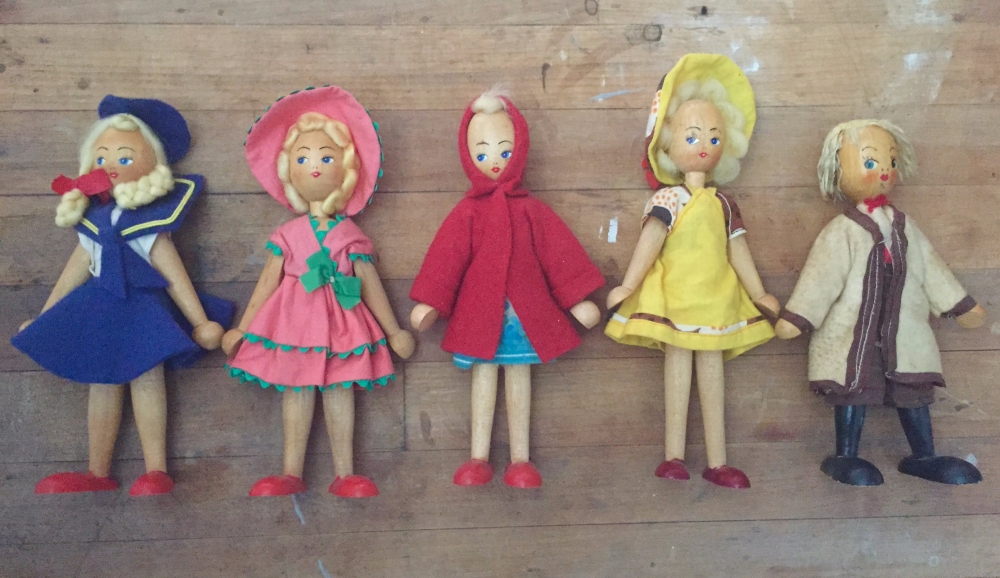 Ok, technically these aren’t really Christmas décor and I think they were mostly made for tourists, but as a little boy I remember my Mother buying two of them at a hobby shop in Indiana. (Our family is Polish and they reminded her of her childhood Christmases.) They lived on our family Christmas tree for every year that I can remember until my mother passed them to me a while back. I usually stick them in a stocking so I can see them quickly from the sofa.

Those first two were my Mother’s, the other three I have rescued from junk shops over the years. It just feels like they should be together.

This passion is mostly Jamie’s. Although, to be honest, they warmly remind me of Christmases at my grandparents who had a row plastic soldiers standing guard over their front porch every December. One year, my family flew from Atlanta to Toledo to spend Christmas day at their farm. I was more than a little distraught to learn that Santa couldn’t locate us that far away from Atlanta….but it more than made up for it when we returned home to find that he had visited while we were in Ohio. (My parents did quite a toddler juggling act to make that happen) And I think of that particular Christmas every time I see a front yard full of blow mold décor. 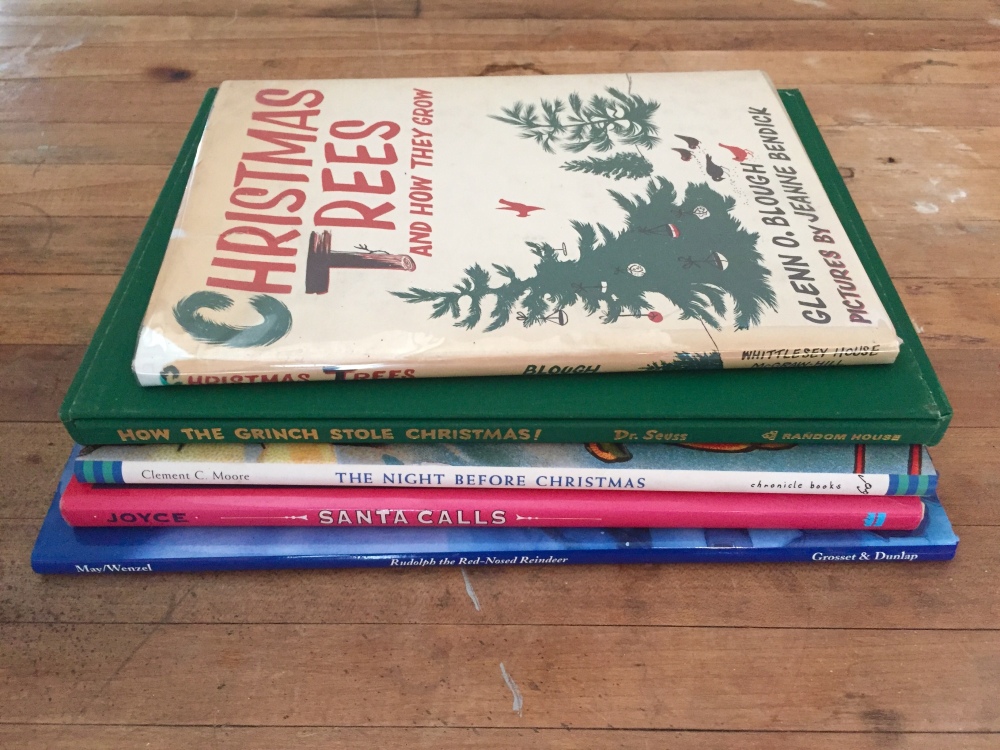 No, I don’t have any kids. Not that I’m aware of anyway. (Wink, Wink, Nudge, Nudge) But I still love to dig through thrift store bookshelves looking for these. Especially for only 50 cents each. I can’t imagine how anyone could ever part with a copy of “How the Grinch Stole Christmas”, but I find them all the time and I’m more than happy to pass the story of the Grinch along to any of the young children in my life……..Or stash one away for myself. 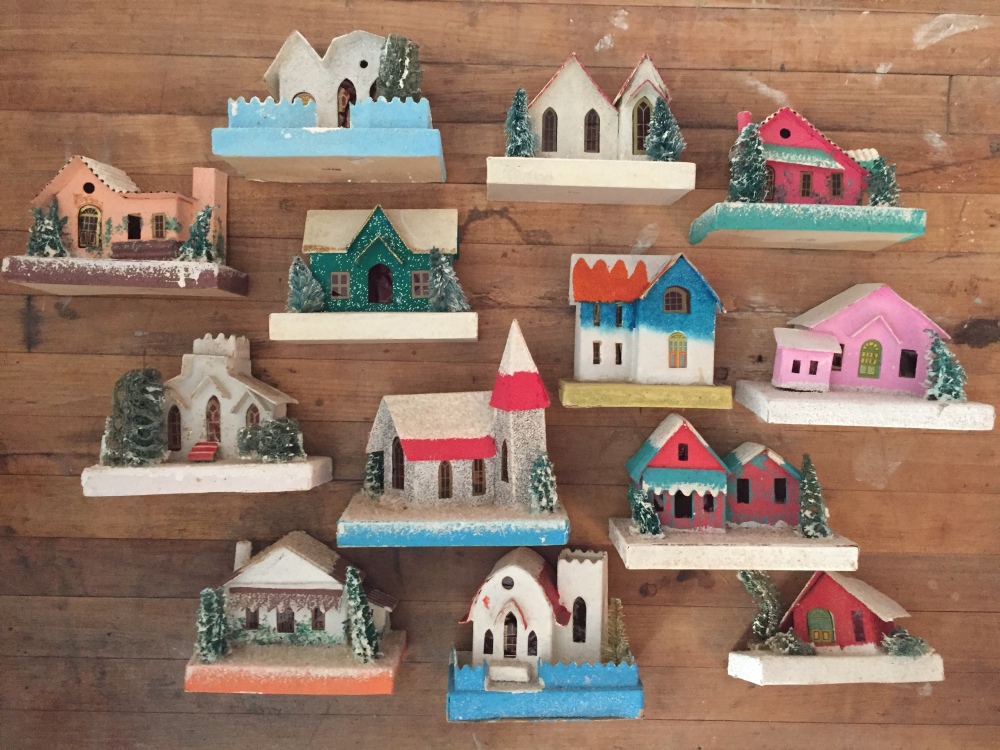 I’ve been charmed by these little houses all my life. I can’t imagine what the Japanese factory workers must have thought of Americans while crafting these tiny houses for our five & dime stores. Dusted with mica powder snow and with cellophane windows that glowed when a light bulb was inserted, they were meant to create a “snow village” under the Christmas tree. But honestly, to me they look even better just tucked into the branches. 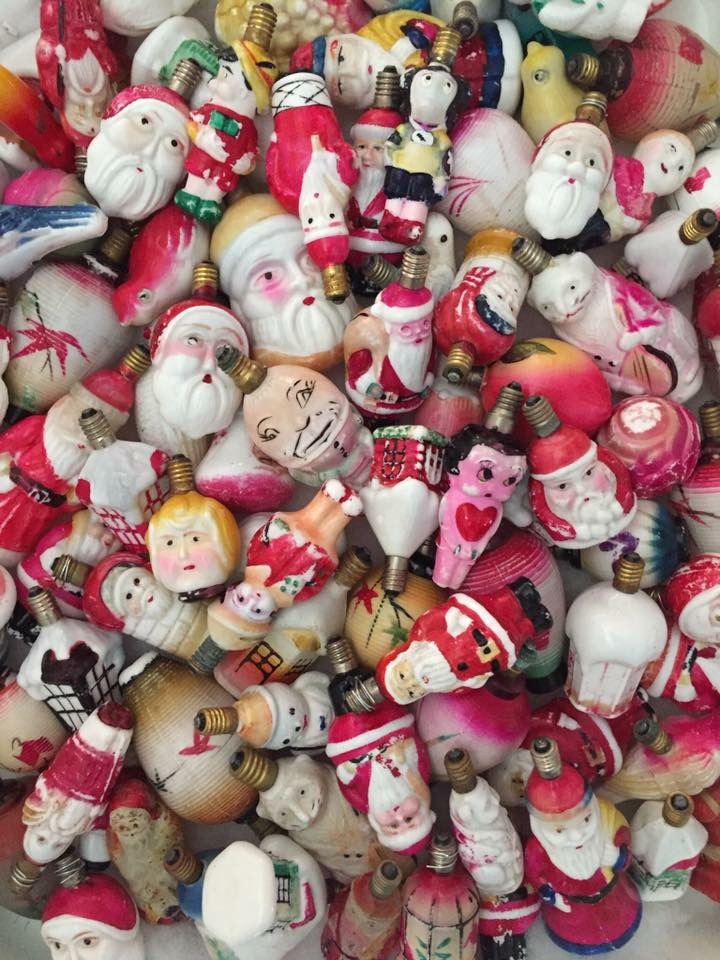 If you’ve never seen these – and I hadn’t until just a few years ago – you have been missing out. In the 1930’s, when electric lights found their way onto American Christmas trees, these kinds of bulbs were all the rage. Usually sold in themed character sets; like Disney, popular cartoons, or nursery rhymes. They all but vanished in the mid-1950’s, probably something to do with the trend for a more “modern” look. Because most of them fit a now un-standard C-6 socket, they were tossed decades ago. It’s a bit of a treasure hunt to find them now, but when I do, – usually for just a few bucks each – most of them……still light up. (I just found that fat snowman today.) 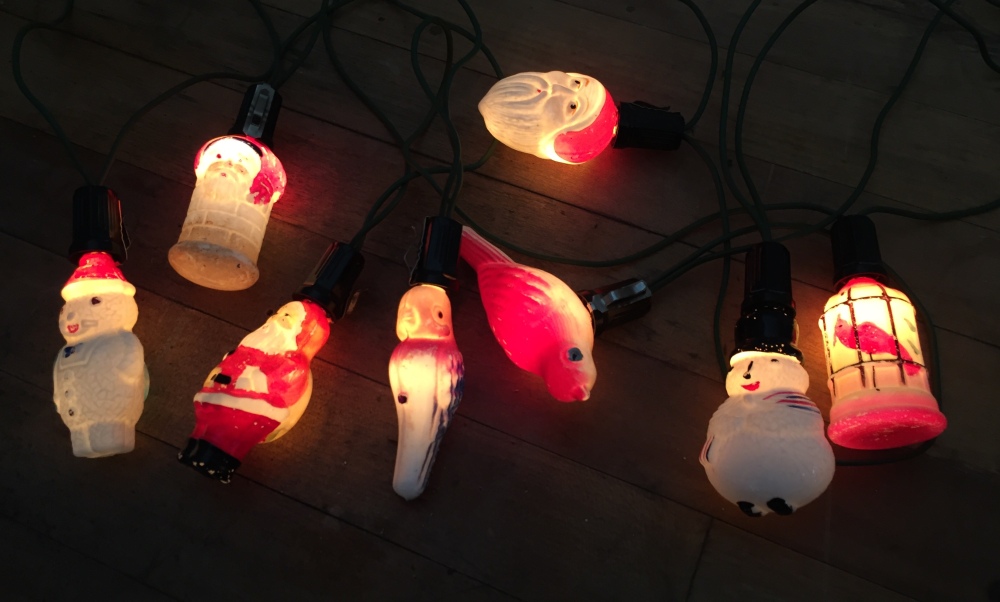 None of these things are what I would consider pedigreed “antiques”…and far from it.

But junk with an undeniable Christmas soul………

28 comments on “Add Some Vintage Christmas,”