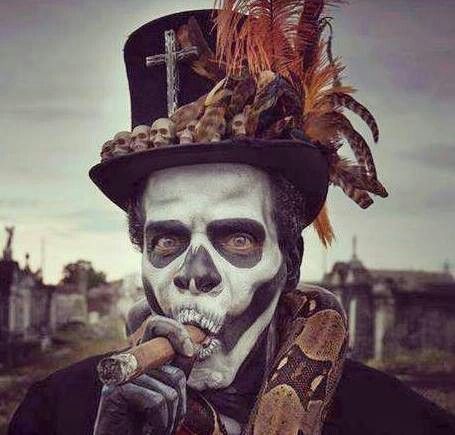 Allow me to introduce you to Baron Samedi.

Baron Samedi, the English translation of his name is the less-frightening sounding “Baron Saturday”, is one of the Haitian spirits of the dead, or Loa.

You might be familiar with versions of him in movies like Live and Let Die and The Serpent and the Rainbow, or American Horror Story; Coven, and even Disney’s The Princess and the Frog. (That’s right, wholesome Disney snuck some voodoo in on you.)

He is usually depicted as a tall black man dressed in a black tailcoat and top hat, with dark glasses and cotton plugs stuffed in his nostrils – resembling a corpse dressed and prepared for burial in the traditional Haitian style. He has a white skull-like face, or sometimes….. a skull for a face.

He is noted for disruption, obscenity, debauchery, and having a particular fondness for tobacco and rum. Notorious for his outrageous behavior, he swears continuously and makes filthy jokes to the other spirits. He loves drinking and smoking so much that he is rarely seen without a cigar clenched in his teeth or a glass of rum in his bony grasp.

Baron Samedi can usually be found at the crossroads between the worlds of the living and the dead. When someone dies, he digs their grave and greets their soul after they have been buried, leading them to the underworld. But he is also the Loa of resurrection, and it is in this capacity that he is often called upon (with a voodoo ceremony, of course) for healing by those approaching death; as it is only the Baron that can accept an individual into the realm of the dead. He can cure a mortal of any disease or wound, if he thinks that it is worth his effort. His powers are especially great when it comes to voodoo curses and black magic. Even if somebody has been afflicted by a hex which brings them to the verge of death, they will not die if the Baron refuses to dig their grave. So long as this mighty and influential spirit keeps them out of the ground they are safe. Respectively, he also ensures that all corpses rot in the ground to stop any soul from being brought back as a brainless zombie.

What does he demand in return for these favors?

That depends on his mood.

Usually he is content with his followers wearing black, white or purple clothing …. or he may simply ask for a small gift of cigars, rum, black coffee, bread, or grilled peanuts.

Not necessarily a bad guy, but still not someone I would ever want to run into in a dark alley.