Our Neighborhood Where We Live

The Cavender house (Cavender is the street we live on) was built in 1972, a few (insert cough) years after we were both born. We are the third owners. We don’t know much about the first owners, but we can tell that there were kids here. The office has red/yellow/blue vinyl floor under the current wood floor, and there is a Disney adhesive shelf liner in the linen closet….but not for long. The previous owner was Robert, whom we credit with knocking down walls, updating the kitchen, and removing all the carpets. He bought the house in 2001. She is about 1500 square feet and on a pretty decent sized lot for our neighborhood.

We live in the Oak Cliff neighborhood of Dallas. Originally 320 acres of farm land on the West side of the Trinity river, Oak Cliff was formed as an elite residential area in the late 1880’s by a developer named Marsalis. He began two development projects with the intent to promote Oak Cliff as a vacation resort. One project was Oak Cliff Park, later called Marsalis Park and Zoo, a 150-acre park that included a two-mile long lake and a 2,000-seat pavilion for dances and opera performances. The other was the Park Hotel, modeled after the Hotel del Coronado in San Diego, which included several mineral baths fed by artesian wells.

During the depression in 1893, the Dallas Land and Loan Company subdivided many lots and sold them to the middle and working classes.

Oak Cliff was annexed by the City of Dallas in 1903, after numerous attempts beginning in 1900. The community’s depressed economy produced a vote in favor of annexation by eighteen votes.

In 1909, a disastrous fire occurred in Oak Cliff, consuming fourteen blocks of residences, including the Briggs Sanitorium.

Clyde Barrow, of “Bonnie and Clyde” fame is buried next to his brother and fellow gang member, Buck Barrow, in the Western Heights Cemetary on Ft Worth Avenue. I pass by it every day on my way to work. His partner in love and crime, but not marriage because she never divorced her first husband Roy Thornton, Bonnie Parker had requested to be buried next to him; but her family demanded that she be buried in Crown Hill Memorial Park just North of Love Field. It was 22-year-old Bonnie who aided Clyde in his jail break by smuggling a gun to him in his cell. The 2 lovebirds murdered 12 people in 3 different states while on their famous crime spree robbing banks, hardware stores and gas stations. They were both 24 when they were finally gunned down in Louisiana.

In 1956, Oak Cliff voted itself to be a “Dry” community. This stopped all sales of liquor. This was in effect until just about a year ago.

On November 22, 1963, Lee Harvey Oswald was arrested at the Texas Theater ( just a few blocks from our house ), after allegedly fatally shooting John F. Kennedy and wounding Governor John Connally. This picture was taken in the back yard of the Oak Cliff boarding house that Oswald was living in at the time. He was separated from his wife and newborn son, who were then living in Irving. 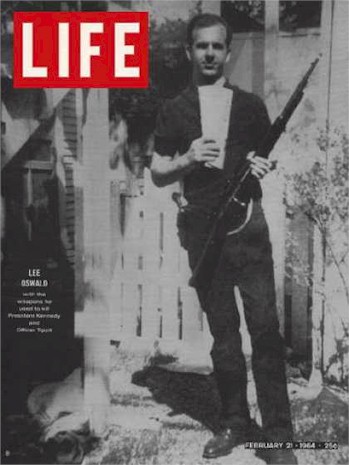 In the early 1970s, many Oak Cliff schools, along with those in South Dallas, became the focus of a long-running and bitter court battle over desegregation. As a result, DISD’s schools were not officially declared desegregated until 2003.

Beginning in the 1970s there was “white flight” of white middle-class residents to nearby suburbs leaving Oak Cliff an often dangerous low-income area. Critics charged that Dallas chronically failed to provide adequate city services and police protection, causing developers to avoid the area entirely. Enter the “gays”. If there is one thing our people like it’s reasonably priced, easily flip-able, turn-of-century houses on tree-lined streets. Pioneers, I tell you, ……Pioneers.

Our house is in Ravinia Heights, a neighborhood in Oak Cliff. Ravinia Heights was once a farm owned by Eli Sanger, one of the founding brothers of the Sanger Brothers department store. Most people in Texas our age and older will remember shopping at Sanger Harris. Anyhoo, Eli sold his farm to an oilman named Claude Cain in 1914 who built a large estate on 7 acres. He named his home “Ravinia”, most likely after the ravines that run through the middle of the property. The house still stands today, hidden by the dense woods…an arched, wrought iron gate on Jefferson Boulevard is the only clue to its existence. I had always wondered what was behind that gate. It looks like the kind of place villagers would storm with pitchforks and flaming torches. The estate had a very early swimming pool, with no filtration system, so it had to be drained periodically. Neighbors downhill from the estate, as we are, would be subjected to occasional yard-flooding. Good thing they don’t do that anymore.

Cain developed the land around his Estate from the 1920’s through the 1950’s, naming many of the streets after his children. There is an interesting mix of architecture found here. Tudor cottages, 1940’s traditional homes, and 50’s split level contemporaries all mingle. Many prominent Dallas architects built houses here during Cain’s developement period, including Charles Dilbeck…who is credited with building the first Texas Ranch House. It is the secluded, forest-like setting that gives this area so much appeal. The winding interior streets conceal the fact that the neighborhood is surrounded by a busy urban landscape.

According to the Oak Cliff Historical Society,”The Residents of Ravinia Heights enjoy rustic homes in a tranquil setting that seems far away from the rush of the city. The architecture is handsome, the neighborhood is well maintained, and the homeowners have one of the best kept secrets in Dallas.”

(Aside from the fires, floods, gunned-down criminals, lack of liquor, and presidential assignations….Not a bad place to live at all)