A while back we wrote about Diane Keaton’s amazing California Romantic house.

Since Jamie and I couldn’t come up with the nearly 11 Million to buy it, someone else beat us to the punch.

Ryan did a great job of personalizing the whole space. I think he may have actually made it “warmer”, most certainly more masculine.

I’m still crazy about those ceiling lights in the kitchen.

Here’s a shot with a little more color in the pottery. Although Diane declined Ryan’s offer to buy the house furnished, she allowed him to photograph the furniture so he could replicate the pieces himself. That’s her kitchen table, one of the few pieces she did part with. 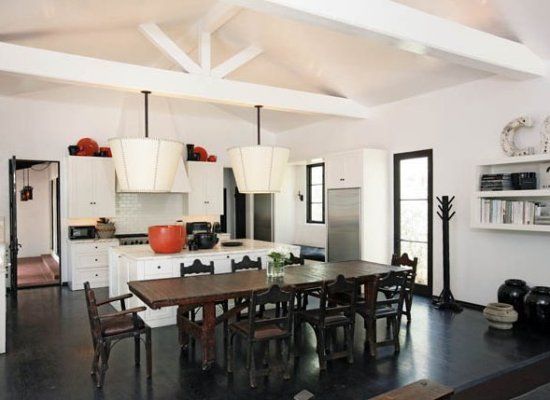 My absolute favorite part of the kitchen now is the CALIFORNIA letters over the built-in floating shelves. I can never have enough old signage. We have “AMERICAN” in the master bedroom, “RATS” in the den, and soon to hang “PHARMACY” in the garage.

The bedroom got a slightly more modern look as well…..

Ryan searched like a man obsessed (I’m sure it was an assistant of some sort doing the actual work) to find an almost exact replica of Diane’s green day bed in the library.

These are just a few of my favorite pictures from the Hollywood Reporter article, you can read more, and see a slide show with more pictures, on the page.