Infused vodkas are very easy to make. We’ve done lemon and cranberry before, but thought we’d shake it up a bit this year and make cucumber.

Crisp and refreshing, what could be better with tonic and a squeeze of lime? Am I right? 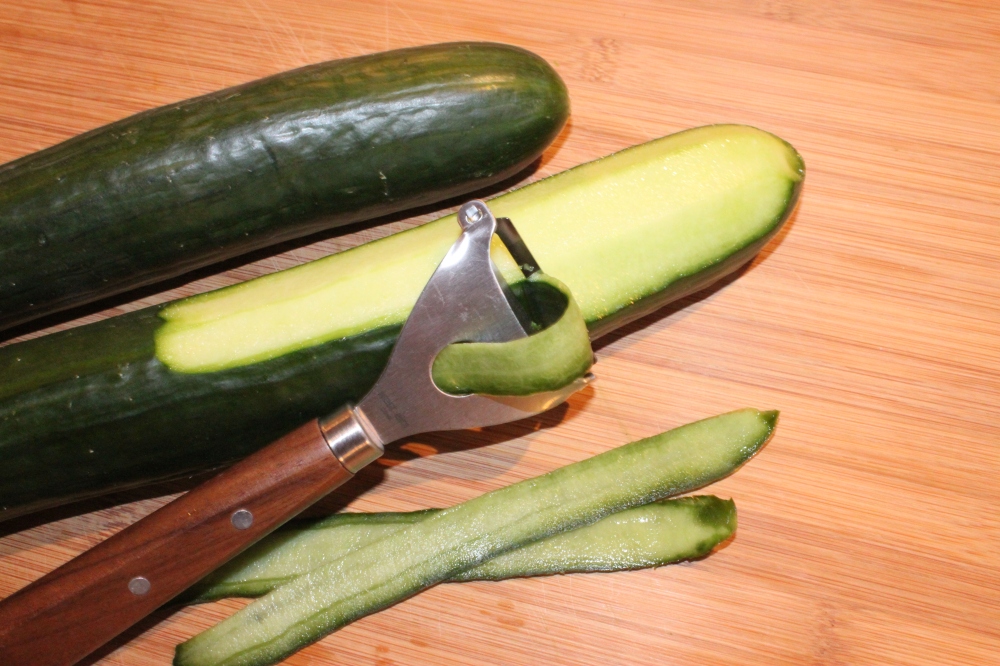 English cucumbers, the ones wrapped in plastic at the grocery store, are milder than garden cucumbers. And better yet, have fewer seeds.

Peel, seed, and roughly slice one for every 750 ml of vodka you plan to infuse.

Use a glass jar with a tight-fitting lid to infuse your vodka. (Don’t use plastic or metal, they could influence the flavor of your vodka in the wrong way)

I’ve wanted a reason to buy one of those giant Ball Mason Jars from Target, and here it is.

Then toss in the cucumber slices. Followed by more vodka, almost to the top. (remember, don’t let the vodka touch the metal lid)

Anywhere from a few days to 2 weeks. Any longer and the cucumber will become bitter-tasting. 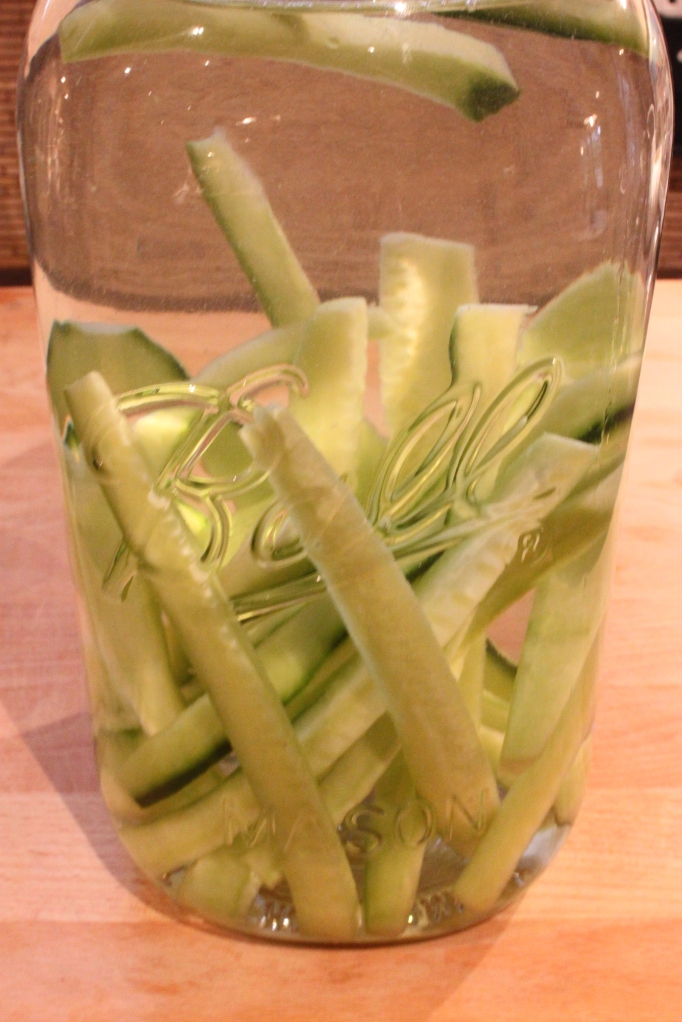 After about 10 days, you’re ready to bottle it.

We’ve been saving upcycled lemonade bottles all year (by drinking the lemonade). I’m crazy about the hinged cork top.

Want something similar? We found some just like them at Crate & Barrel.

Before bottling your vodka, it’s important to strain out the little bits of cucumber.

I scooped out the cucumber slices and threw them away…..Ok, I had a taste first…..they weren’t good, slightly, ok very, vodka pickled.

Line a funnel with a coffee filter over a glass pitcher. Not the fastest way to strain, but it works.

Then pour the strained vodka into the bottles. 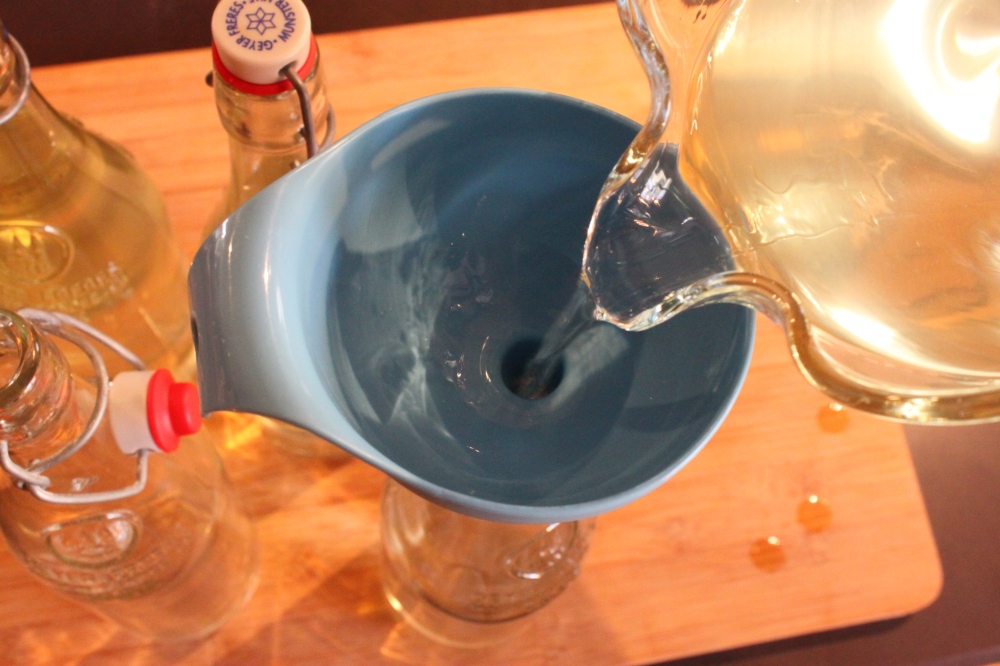 I put together labels on Vistaprint.

I wasn’t thrilled with any of the templates they offered, so I started with a blank slate and an Indian headdress graphic that I aged and faded, then added my verbage over that; in green of course, as a nod to the cucumber. These were so easy to do that now I’m looking into a few other projects on the Vistaprint site. Stay tuned…and try to act surprised.

50 cents each, for extra-large (3 inch X 4 inch), I ordered 8 just in case there were any mistakes applying them to the bottles.

Vistaprint shipped them almost the next day. 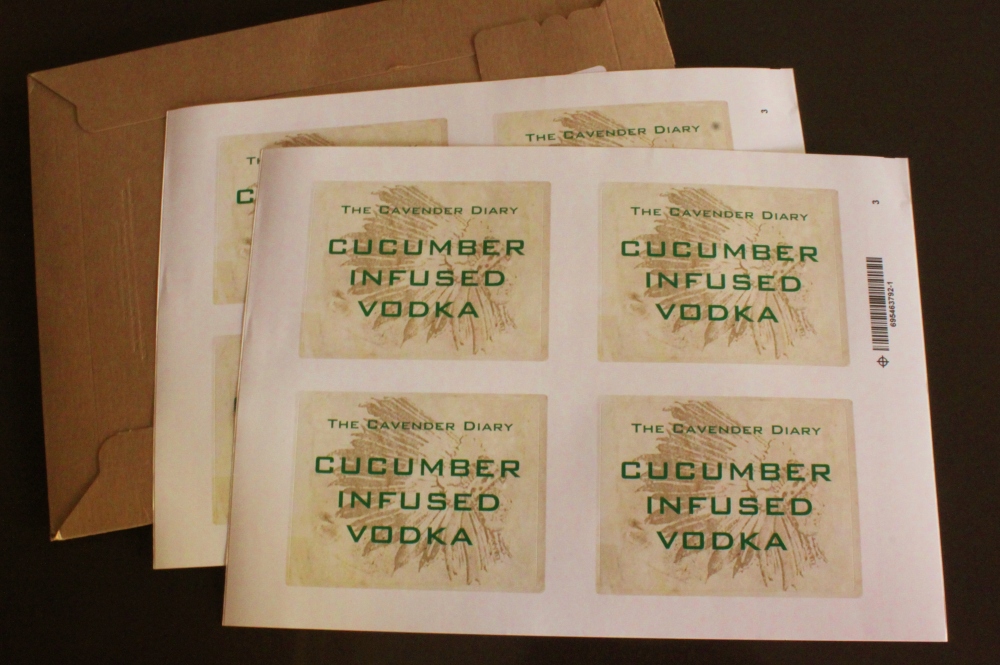 Couldn’t be happier with the finished labels, 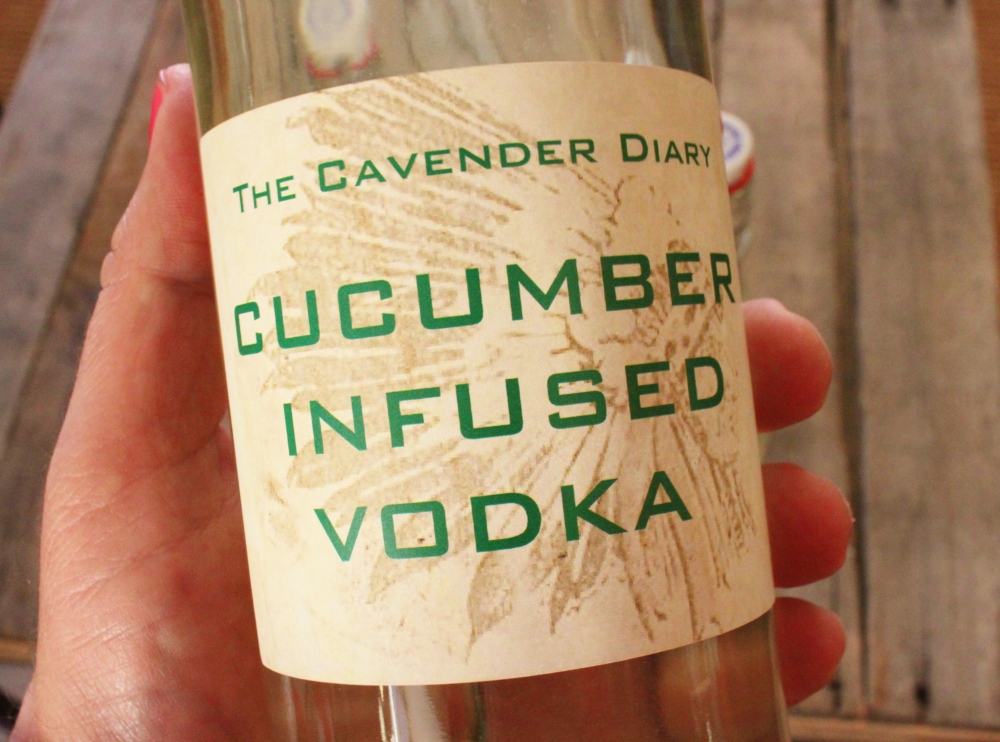 The green lettering picks up the slight green tint of the vodka. 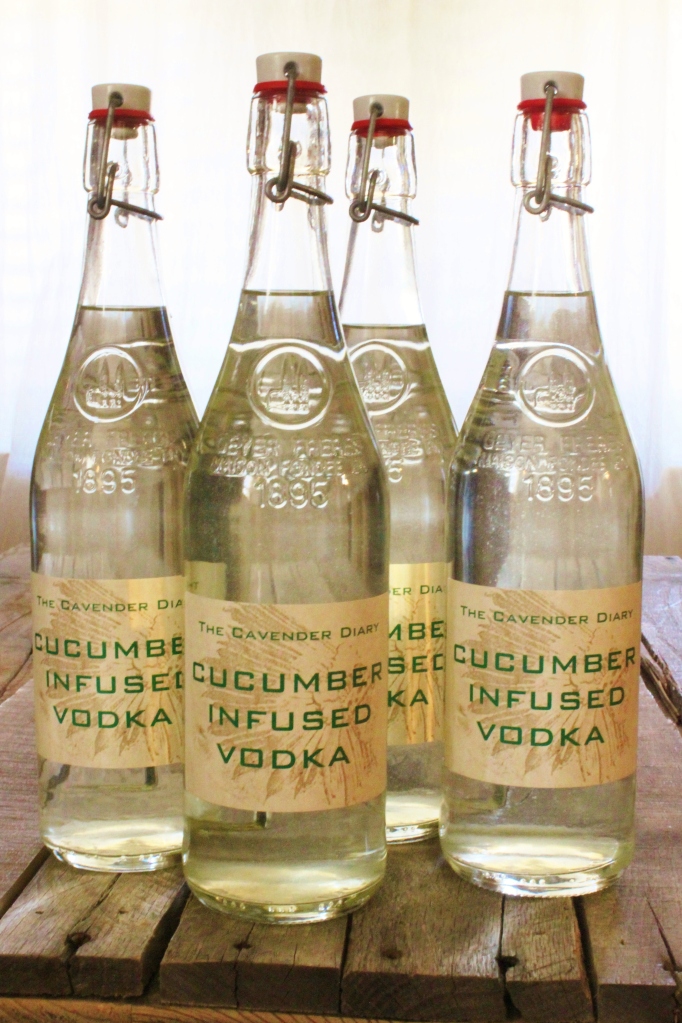 Because we thought that some of our friends would be a little puzzled about what the Heck to do with cucumber vodka…….we included a recipe card for our dear friend Robin’s Cucumber Cooler.

Add to a shaker with crushed ice, a wedge of English cucumber, an orange slice (with the peel), and a sprig of fresh rosemary. Shake once, don’t strain, pour into a double old-fashioned glass….and Enjoy

Delicious, give it a try sometime.

AND……. try infusing your own vodka.

Cucumber, lemon, vanilla bean, ginger, cranberry, serano….give any of these a shot.

We guarantee that you’ll love it.

…..and so will the friends that you give it too.