When I was in my very early 20’s, I was somehow hired as a commissioned salesman at Neiman Marcus. As if y’all aren’t already aware, Neiman Marcus is the most fashionable department store in Dallas…….and quite possibly the whole world.

Naturally, I was pretty nervous about what I would wear to work there……

I just didn’t own any clothes at the time that were stylish enough to work at Neiman’s. (I’d borrowed a fraternity brother’s suit just for the interviews – Thanks Again, Chris) I was really still a kid; all I had to wear was my navy fraternity blazer with the crest, a few pair of khaki chinos, and about 2 dozen striped ties………That’s it. The other sales people scowled daily at my navy blazer and chinos. My “Look” was always the butt of their jokes……and I knew it. They’d all been working in retail much longer than me and wore black Armani suits and Ferragamo loafers that customers expected the sales staff at Neiman Marcus to wear. But not me, I was always the odd man out. An elderly woman was returning a sweater to a coworker one day and mentioned me as the salesman that had sold it to her. Well, not me exactly. She couldn’t remember my name, but she said that she had been helped by, get this,

Those bitchy queens that I worked with just ate that with a spoon. They still made fun of me behind my back, only now, they had the nickname “School Boy” to add to the mix.

After paying my rent, buying food, and occasionally making my car payments on time…….I just didn’t have the kind of money leftover that it took to invest in suits like my coworkers wore.

But one day, cruising the racks at an outlet store, I found one. The perfect suit. Double breasted (like a Wall Street Broker), deep navy blue with just the slightest pin stripe, genuine horn buttons, and big hand-stitched peak lapels (it was a stranger in an elevator who actually told me that they were hand stitched). Strait off the rack, it fit like it had been made just for me. It was Ralph Lauren, of course….and I’m fairly certain that Mr. Lauren himself would have worn such a fine garment. Even at the heavily discounted outlet price, $299, it was pretty far out of my price range. Just finding 50 extra dollars to put it on lay-a-way was quite a stretch. But I did it…….After all, I had found the suit that I was certain I would be buried in.

I had 30 days to pay off the lay-a-way balance and somehow I managed to scrape together another hundred dollars. The remainder was lent to me by my dear friend Lenny; who then held the suit in his own “lay-a-way” plan until I could pay him back. Which eventually, a few months later, I did.

I couldn’t wait to wear it to Neiman’s. Couldn’t wait even to get the pants hemmed……so I did the hem job myself……..with strips of duct tape. Just folded the pant legs inside themselves, and taped them up.

I know, I know, I know……..what the Hell was I thinking? But I was so excited to wear it in front of my snarky co-workers. My first real suit.

There were “Oohs” and “Ahhs” from everyone when I showed up at work the next morning. I finally looked the part of a sales professional.

Wearing that suit made me feel like I finally belonged working at Neiman Marcus………..until about halfway through the day……..when the duct tape came loose. Of course, I didn’t realize that it had until much later. In fact, I didn’t realize it until looooooong after everyone else in my department had noticed the duct tape strips hanging out of my pants legs. They even told people from other parts of the store to come see. Again, even in the nicest suit I could ever afford, I was still being laughed at.

I went into a fitting room and cried,

The next day, I took the pants to a tailor to hem.

I wore that suit to my next job interview, and every job interview I had after that one. Here we are on a trip to San Diego with my dear friend George.

This is my one photo in Paper City, our Dallas social rag, volunteering for the live auction for AMFAR, 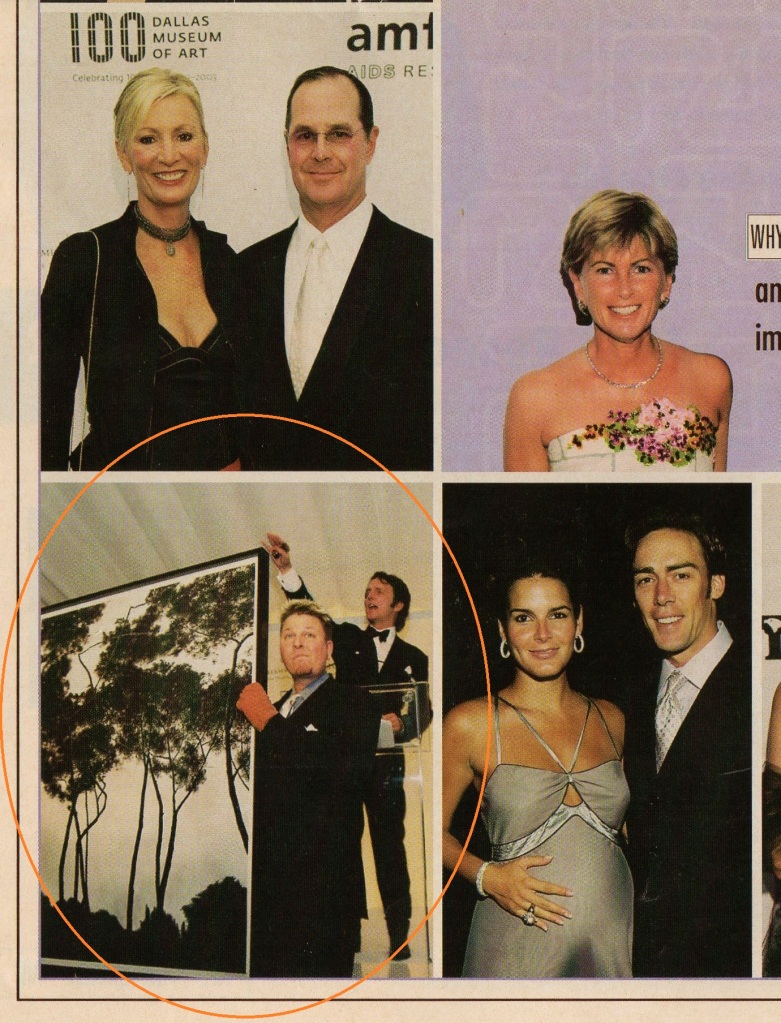 I even had my driver license picture taken in it,

I wore it to my high school reunion and on my first business trip. Every New Year’s Eve. Every Easter Mass. Every wedding. Every funeral. Every major event in my life that required a suit and tie.

I always felt like I was at my very best.

When it started to get a little tight around the middle, I took it to my tailor to move the buttons slightly. But moving the buttons wasn’t quite enough……he needed to let the seams out. “I’m givin’ ‘er all she’s got left to give, Cap’n”, he told me in his best Scotty impersonation. At the rate that I was expanding, I knew we didn’t have much more time together……

It’s a little sad to admit, but over the years I’ve replaced it with a couple of new suits in my new size.

I found that first suit in the very back of the closet a few weeks ago; about 25 years after first buying it. All the memories of working at Neiman Marcus came flooding back to me. Hadn’t thought about wearing it in well over a decade. Double-breasted isn’t really flattering on me anymore. There were a few miniscule moth holes in the right sleeve and I noticed that the lining was beginning to come loose under the arms.

I couldn’t get it on my body now if my life depended on it. Not without a pair of scissors, anyway.

So, I added it to our Goodwill donation bag.

But I know that nothing I own will ever make me feel that special again.

But maybe, just maybe, some other young man will find it at the Goodwill……..and he’ll feel the same way that I did in it.

40 comments on “My First Adult Suit”