I’m not really that old. But do I remember our local five and dime store.

Shopping for Christmas presents was my second favorite part of the holidays. (After decorating the Christmas tree, of course)

At some point every mid-December, my Mother would drop me off at M.E Moses with 10$ in my pocket and an hour to shop all by myself.

My little brothers were always the easiest to shop for. Josh liked cars and trucks. Ben was still a baby; he liked anything he could put in his mouth.

A waxed box of chocolate covered cherries for my Dad. Not because they were his favorite……..but maybe because they seemed so exotic to me. Like something adult business men gave to each other as gifts.

For my Mother, I would find the prettiest, most glamorous things I could find………in the 2-3 dollars range. I remember one year selecting a pressed-glass punch bowl set with a dozen minuscule cups, and little plastic S-hooks to hold them on the edge of the bowl. I’m pretty sure that it was 5 dollars. She gushed about how much she liked it when she opened it, but I don’t remember her ever using it.

Usually though, something shiny would catch my eye. Something that fancy ladies wore. It seemed like my mother always rushing out the door in heels and pearls leaving a cloud of Yves Saint Lauren fragrance behind in her wake.

Sometimes I would find her a Christmas pin. You know the ones, shaped like a Christmas tree, or a snowflake, or even a wreath.

A few years ago, my Mother gave me back one of those 5 and dime broaches that I had given her. She knew that because I’m such a sentimantalist, that I would truly appreciate it.

I re-discovered it the other day in my dresser drawer – where it’s been living – and pinned it on a tweed sportcoat. I know, I know…….that’s something that fancy boys would do; like Noel Coward or Oscar Wilde. 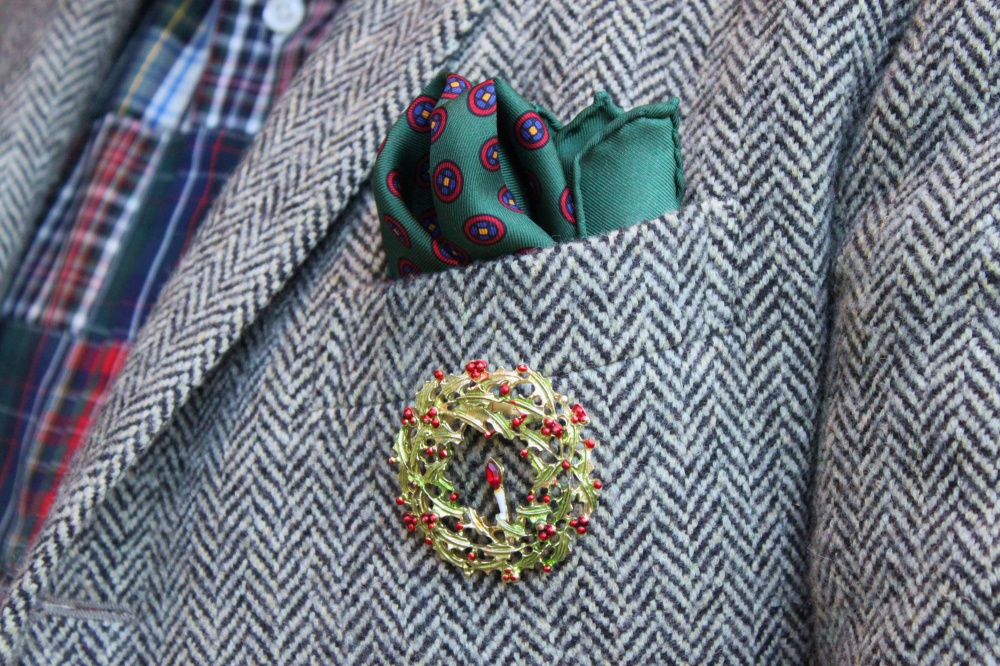 It wasn’t nearly as jewel-encrusted as I remember it being when I was a kid…..just one lonely “ruby?”.

But it’s worth the world to me.