Jamie and I don’t have any kids.

And we won’t. (At least, not without the help of modern science or divine intervention)

Our dog is the closest we’re going to get.

If you’re a true Cavender Diary reader, you’ll remember when we adopted our Harley Davidson – back when Jamie did all the writing on this blog. Loosing her in October was the hardest thing we’ve gone through together…..

But it’s been a few months, and we’re ready to move forward.

A few weeks ago, Jamie reached out to a couple Doberman rescue groups to see if there was possibly a good fit for us. After a written exam, several phone interviews, and a home visit, Lone Star Doberman Rescue matched us with a 14 month-old boy in Argyle, TX. named “Styrke” – Norwegian for “Iron”.

Look at those big floppy ears and that pink tongue.

How could we resist?

So, once again, we took a 45 minute trip just to meet a dog……and proceeded to bring that dog back home with us.

He was waiting for us at the end of the driveway, I think he knew.

Our second rescue, our second Doberman rescue together. My third Doberman. I had one just before Jamie and I moved in together. Faust. Stomach cancer took him just before we bought this house. I have a severe attachment to Dobermans. (Like Hunter S. Thompson, and the Dark Knight, and David Berkowitz. HHHmmm. Not exactly the company I ever expected to be included with…. but here we are.) It breaks my heart that these smart, amazing dogs could ever be unwanted.

Styrke had quite a journey before making his way to us. Five months ago, he was found at a common dog dumping ground in Houston. He was malnourished, heartworm infested, and so riddled with mange that the animal shelter wasn’t even sure what breed he was. 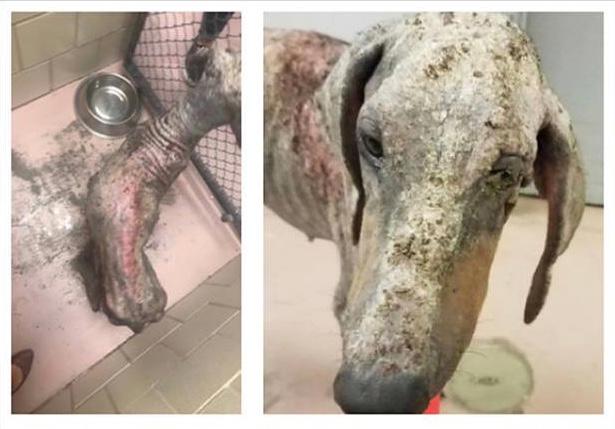 Lone Star Doberman intervened; paying for his recovery and placing him with a foster care-giver in Houston. She named him Styrke, because iron is strong – like he needed to be. But about a month in, his foster moved to Hawaii and Styrke was transported to Kim in Argyle. She crate-trained him and taught him some commands to be prepared for the next step in his life.

His life with us.

We weren’t too keen on the name Styrke. No one even knows how to pronounce it. A new life deserves a new name. So Jamie bought him a new dog-tag, engraved with “Logan” – our favorite X-Man. (Who happens to be even stronger than steel.)

Logan’s a pretty chill little guy, but still a puppy;

He growls at the “Huuuump Day!” camel in the Geico commercial.

He scratches his ear untill he farts.

He doesn’t know the words “Outside” or “Daddy”, but he sure knows the word “Treat”. And where they’re kept.

He isn’t quite sure what to make of the vacuum cleaner yet; fun new game or arch nemesis?

It’s been a week now, and a pretty easy adjustment for all three of us. We think he’s a perfect fit.

I’ve heard it said that people who have dogs live longer,

I’m not sure about that,

But I know for a fact that people who have dogs live better.

Welcome to the rest of your life Logan…

That’s right, 3 years ago today we were introduced to Harley Davidson.

We found her through an online rescue society, North Dallas Dog Rescue, they specialize in placing Australian Shepards…..but by some act of fate, a Doberman Pincher named Harley Davidson dropped into their laps that week. She had been a puppy mill breeder, and then bounced from apartment to apartment.

I wrote them an email and we jetted to the front of the “Harley getting list”….read about that here. (It’s a good one)

We went to “just meet” her, and fell in love with that quirky girl immediately.

Like all gay men, the child-less variety anyway, we tend to personify our dog. Many’s a day that I would come home from work only to be greeted by a frustrated Jamie at the door shaking his head and saying,

Sure, she’s my daughter when she’s a handful, like when she wakes us up in the middle of the night to let us know the power is off. Why would we ever want to sleep through that? But I know that her heart really belongs to Jamie.

And why shouldn’t it? He works from home and she spends most of her day laying at his feet……when she isn’t corralling the squirrels in the backyard, or warning the walker-bys in the front.

There have actually been times that I have arrived home to a Jamie-less house to have Harley greet me at the door, exhale/sigh loudly upon seeing me, turn around and return to her room to lay down……She was expecting the fun daddy. The one who lets her sleep on the bed when I’m out of town.

That’s right. I know about that.

Like I can’t tell that there’s a Doberman-shapped indent on my side of the bed.

When it came time for us to find some doggy daycare (We call it “school”. Yep, personifying again), Jamie went to the best. The Dog Lofts in Oak Lawn. Jamie works out of the house and there are days when he just needs some office time alone….taking conference calls, and giving training session and demos without 90 pounds of needy loudness 5 inches from him at all times. He toured the Dog Loft facility before committing, and cried like a baby on the first day he left her there.

The staff at the Dog Lofts is amazing.

I’m not sure if Harley truly is exceptional, or if they just tells us that. (She is pretty memorable with her one floppy ear. She will cock her head to the good ear side when someone talks directly to her) They seem to have a new story about her almost weekly. How she can open doors, but only lets the other dogs out. How she occasionally gets overstimulated and needs a “time out” to calm down (that sounds about right). And how she sometimes sits in the middle of the play area and howls straight up in the air like a siren.

There have even been days when she comes home with a French-tip manicure. I don’t know how they hold her still long enough without a horse tranquilizer.

She was banned for a week once because she had a wart on her lip. How humiliating is that? It’s like your kid is the one that almost spread head lice to everyone else in his class.

When I pick her up from school, every time she comes around the corner she slams into the glass door in front of everybody. (Staff, other parents and well-behaved dogs) She’s not trying to open this door, she just doesn’t see the glass.

Yeah, that’s my daughter all right…….

And I wouldn’t want it any other way,