I know that most people consider Harry Houdini to be the greatest all-time illusionist.

But, Carter the Great has always been my favorite.

Charles Joseph Carter grew up in the San Francisco bay area with a fascination for magic at a very young age. When he was just 10 years old, he preformed tricks for live audiences as “Master Charles Carter the Original Boy Magician”. The need for a stable “young wife supporting” career (he married Sarah Annabelle) lead him away from magic and into the field of journalism. Carter even worked as a lawyer for a short time.

Luckily for the world, his interest in magic couldn’t be stifled, and he was drawn back to the world of illusion. There were a great many American magic acts at the turn of the century, considered by many to be the “Golden Age of Magic”, so Carter took his career abroad where he achieved his greatest fame and a certain international mystique. He began as a solo performer on a medicine show, and evolved into a globetrotting illusionist. Some of his more popular tricks were “sawing a woman in half” – aided by assistants dressed in nurses uniforms to add to the “danger element” – and making a live sacred elephant disappear while suspended in air. His most popular illusion by far was “Cheating the Gallows”, in which a shrouded Carter would vanish just as he dropped at the end of a hangman’s noose.

In 1917, Carter , in his early 40’s, unable to continue his world touring magic show, and very wealthy from decades of traveling, purchased the famous Martinka Magic Palace in New York City. The Martinka brothers built props and sets for all the famous illusionists at the time in their workshop in the back part of the store. The Martinka Company continued doing so for decades, even creating the illusions for the MGM classic “The Wizard of Oz”. Remember when the wicked witch disappeared in a cloud of red smoke? It was also in this shop that the Society of American Magicians was founded in 1902. Carter kept his pet lion, Monty, in the back room. More than once, Monty’s roar would send a customer running for the front door.

Carter’s true home was always in San Francisco, where he purchased a sprawling house in the Seacliff District near the Pacific Ocean. He would perform for small groups in the basement of the house, and there are still occult references in the stained glass windows. Although sometimes mistakenly referred to as the “Houdini Mansion”, Carter’s house is currently used as a foreign consulate.

Barney Stinson’s apartment on the TV show “How I Met Your Mother” is pretty much a black and grey box except for that one shot of color from the Carter the Great print he has tucked in a back corner (behind witch, Barney keeps his signed copy of David Lee Roth’s autobiography)

An inside joke for 2 reasons. First, Carter Bays is the executive producer/co-creator of the show and secondly, Neil Patrick Harris, the actor who plays Barney, is an amature magician and the President of the Board of Directors of Hollywood’s Magic Castle.

Carter’s spectacular theatrical advertising lithographs helped draw hundreds of thousands of theater patrons to his shows. Not intended to last very long, they were printed on very thin paper by Otis Litho Co in Ohio. Carter’s advertizing prints are considered by most collectors of “the Golden Age of Magic” memorabilia to be highly desirable because they are particularly colorful and lush. One classic Carter window card is titled “Carter Beats the Devil,” showing the magician playing poker with the devil (Carter holds four aces to the devil’s quartet of kings). 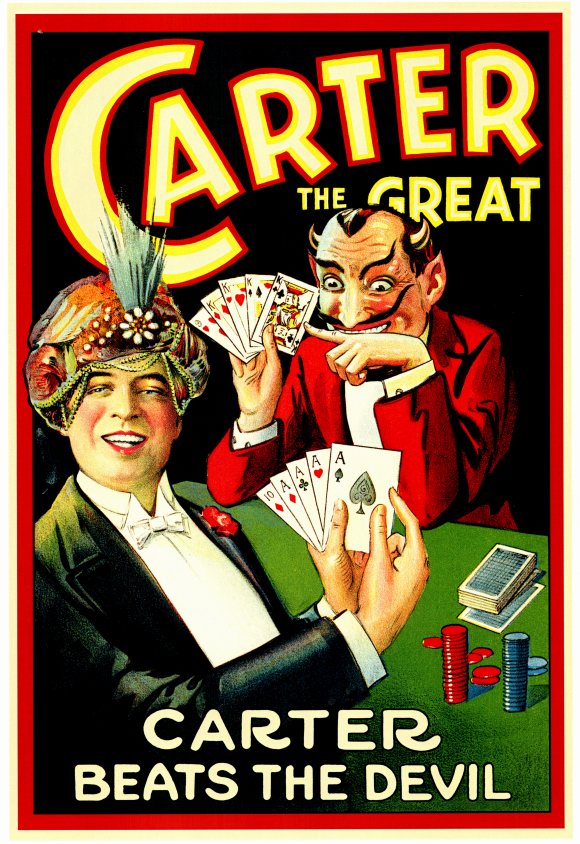 Nearly 65 years after his death, Glen David Gold wrote a fictional account of Carter in his novel Carter Beats The Devil. The title taken from this very advertizing poster.

In the book, Carter asks President Warren G. Harding to join him onstage, where he dismembers the president and feeds him to his lion, Monty…. of course Harding appears later unharmed and the audience is amazed. But when Harding mysteriously dies later that same night,………. it’s Carter who is the first suspect. A thrilling combination of true life characters mixed with fictitious encounters, the book received rave reviews from both readers.

After Charles Carter’s death from a heart attack in 1936, his son Larry Carter took over as Carter the Great.

“So why the big Hoopla about Carter the Great?” you ask….

Tune in tomorrow and see.