Actually, we were fighting Oncor, our electricity provider.

Last Saturday we were abruptly awakened at the crack of noon to the sounds of chainsaws in our neighbor’s back yard. The Oncor tree trimming specialists (I should say Dudes with Chainsaws) were in our neighborhood trimming ( I should say  Butchering) trees that were hanging over the power lines. We have seen their work before and apparently their idea of trimming was either make a HUGE V-shaped gash down the center or to cut off entire sides of trees.

Then there was a very loud knock at our door accompanied immediately by an excited Doberman running back and fourth. 2 creepy looking dudes with chainsaws. They wanted in our backyard to slice off  the back side our only tree.

We have one, solitary tree in the backyard. I think it ‘s a live oak but it’s mostly mistletoe. He’s a tall slim broccoli reminiscent guy. And, AND, AND……..about 15 feet from the powerline. If he is such a threat…Shouldn’t they be able to reach him from the alley? We are understandably all for safety, if we actually had ANY trees that hang over the power lines we would most certainly want them trimmed. But NOT slaughtered.

I let them in the backyard and quickly ran to the internet to research some kind of intervention.

Jamie’s idea of intervening was much more effective. He stuck his head in backyard and bluntly told them to get the hell out of our tree. Only his language was slightly…… “saltier” …….than my edited version.

They retreated quickly and he released the Doberman to patrol the perimeter and prevent anyone from entering our backyard without our permission. Or they would be severely whined at…….

This wouldn’t be our only confrontation with Oncor…….

This morning they were back; as we knew they would be. Only this time it was two good-ol’-boys wearing very official neon vests with “Utility Forester” on the back….I can only assume they were wearing neon so people won’t accidentally run them over,…… or shoot them.

Jamie actually said, get this, ” Let me take care of this, I can speak red-neck”. Good thing too, because when the guys noticed the Whitetail deer antlers in our garage, Jamie was able to talk to them about “point counts”…..and not about how they can be used to hold up Christmas wreaths, ……….like I most likely would have. Because that’s what antlers are used for in this house.

They agreed with us and only trimmed off about a foot and a half from the branches that were close to the power line…and they reached them from the alley on a cherry-picker with clippers. No need to climb into the tree with a chainsaw. 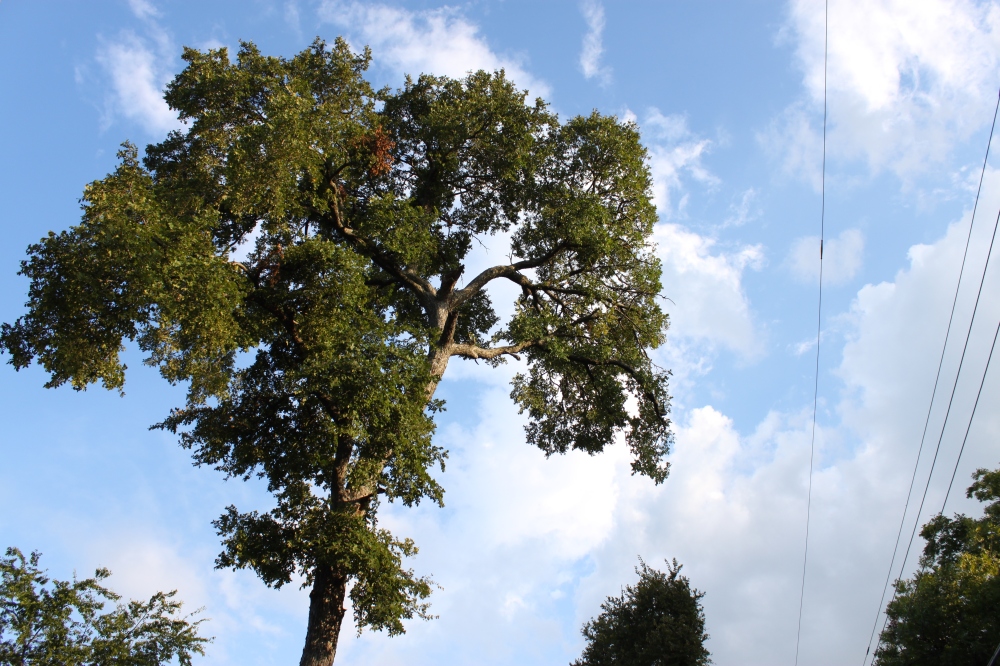 and no one was accidentally shot…..

One of our readers sent us this link about a similar encounter she had and the resulting article on Angieslist, Read it Here, it’s exactly how we feel.)