Oh Yeah, We Went There… 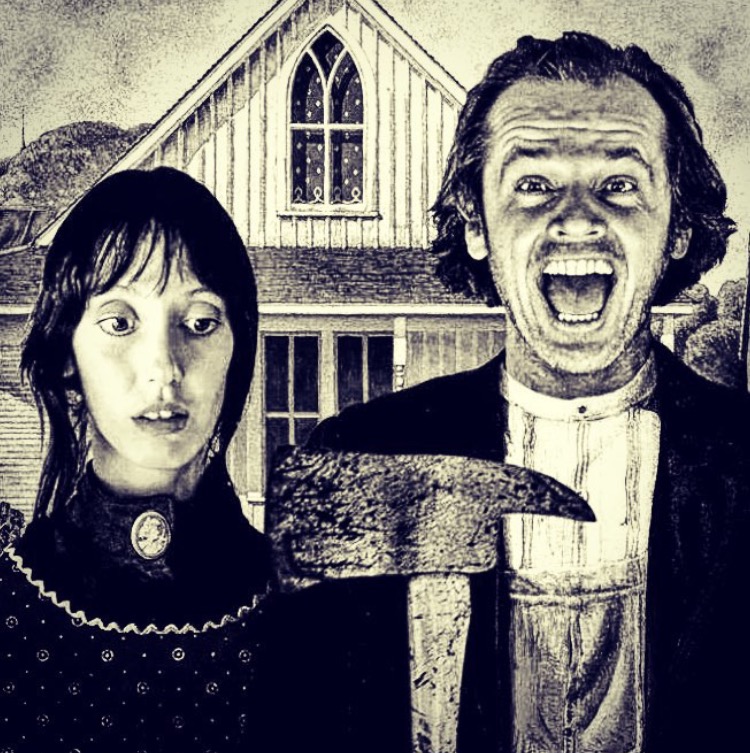 When I was young, I remember watching late night TV and there was a commercial for some movie where a man carrying an ax was chasing this kid through a snowy hedge maze. Just that image, freaked me the F#@&! out.

Then I read the book (pretty sure borrowed from my Mother) and it hit me even harder.

I still have Shining nightmares.

So why, ohhhh why, would I want to visit the hotel that inspired that horror? 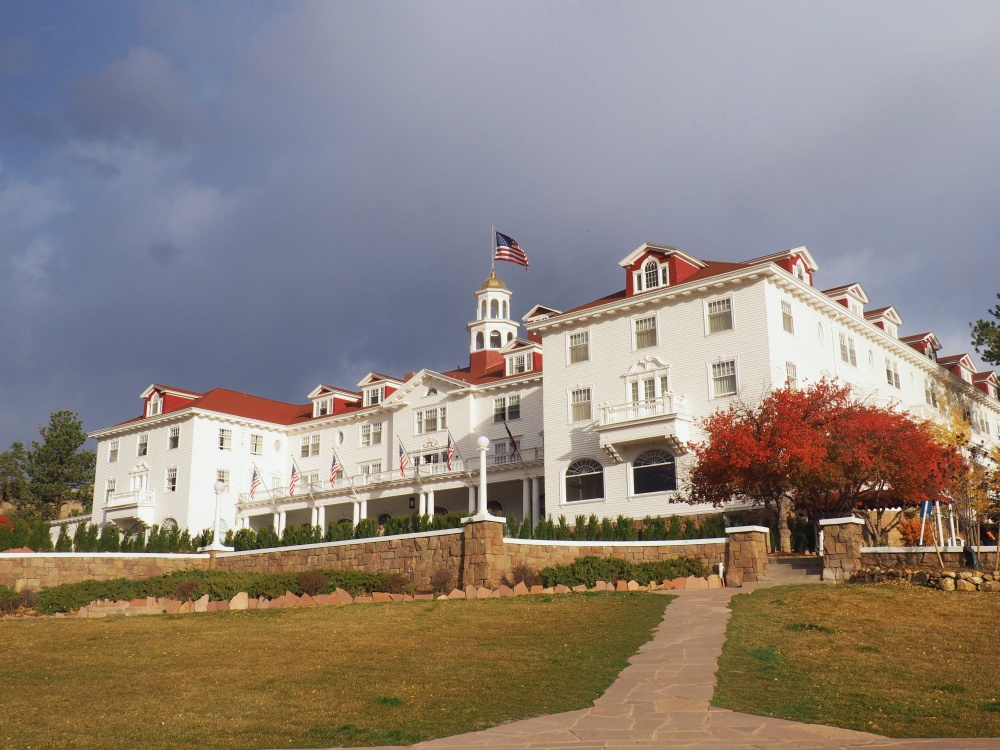 When Jamie told me he was attending a work-conference at the Stanley Hotel, the most haunted hotel in the US, I immediately booked a ticket to tag-a-long on his business trip.

When F.O. Stanley came to Estes Park Colorado in 1903, the 53-year-old inventor of the Stanley Steamer had gone there to die. He had been diagnosed with tuberculosis and given only a few months to live. Why not spend those last few months in one of the most beautiful places in the U.S.? Stanley’s health improved so much over the course of the summer (he lived another 40 years) that he quickly purchased land and started building a stately luxury hotel so that he and his wife, Flora, could share this beautiful place with their family and friends. 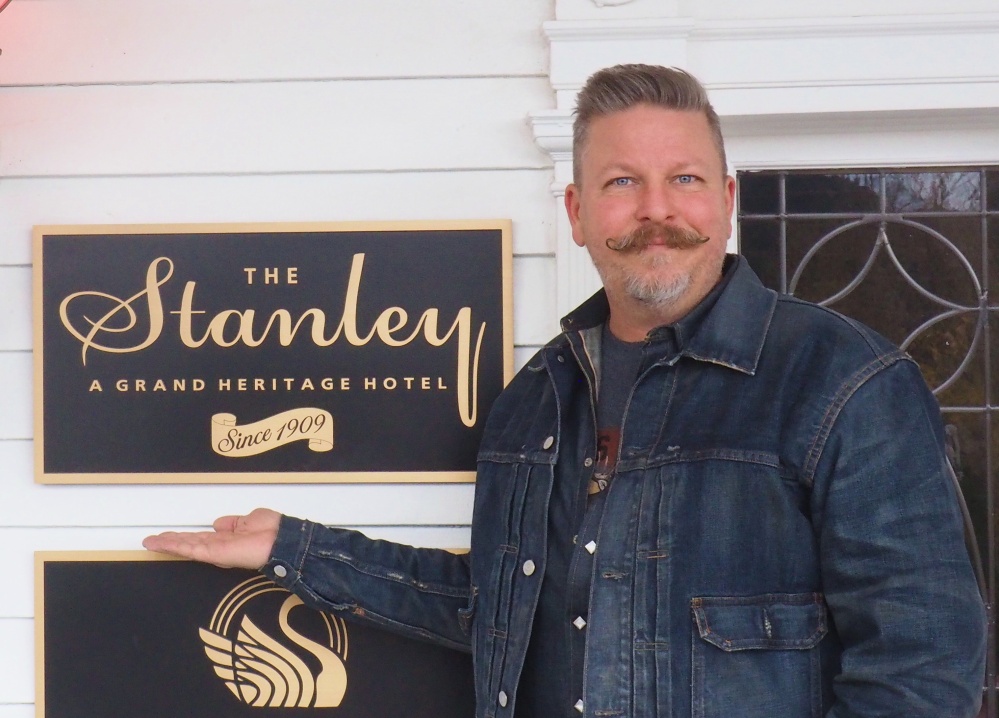 Flash forward 71 years, the once grand hotel had fallen on some hard times, and gone through a few uncaring owners. A young horror writer and his wife stumble on the hotel when their road trip through the Rockies is cut short by a snowed-in mountain pass. It’s the last day of the season (it would be 9 more years before the hotel offered central heat) and the Stanley Hotel, working with a skeletal staff, reluctantly rents the Kings the Presidential suite, room 217. Stephen King was working on a new novel at the time about a haunted carnival and a young boy with telepathic powers – his editor hates it. After spending the night as the only guests at the Stanley hotel, and encountering Mr Grady; the bartender/caretaker who tells King that “your money’s no good here”, experiencing a ferocious nightmare where a hotel fire hose chases his 3 year-old son down an empty hotel hallway, and an encounter on the abandoned 4th floor with the ghosts of twin girls……Mr. King returns to Maine to write what would become his bestselling novel.

If not for the King’s fortuitous stay at the Stanley, and the best-seller that followed, the hotel may not had been saved from the wrecking ball. In fact, Mr King contributed $2 million to renovate her in order to film the 1997 mini-series version of his novel.

Room 217 has a pretty odd past other than just sparking Stephen King’s imagination. During a power outage in 1911, maid Elizabeth Wilson ignites a gas leak with a lit candle, blowing pieces of the hotel over a half mile away. She fell through the floor and was recovered in the ballroom from underneath the rubble of 3 floors with several broken bones. F.O. Stanley pays for all her medical bills, and upon her recovery, gifts her a “job for the rest of her life” at the Stanley. Possibly, after her death as well. Elizabeth, who died in 1951 at the age of 94, is said to still work room 217, occasionally unpacking guest’s luggage for them…..and even packing a gentleman’s bags if he’s not married to his “sleeping companion”. The hotel used to enforce a strict “married only” policy with bachelors required to say at the Lodge next door.

Actor Jim Carey spent a few hours in this room. Just a few hours. He checked out in the middle of the night without saying a word and immediately checked into the near-by Holiday Inn.

Ghost Tour? Don’t mind if I do.

Myself, and 20ish other curious visitors were led through the darkened hotel for an hour and a half by our tour guide, Travis. Not only did he give ghostly encounter stories for the Billiards Room, the Music Room, The Ballroom, the Grand Staircase, Room 217, the tunnels under the Stanley and the very haunted 4th floor….he threw in quite a bit of Stanley Hotel history too. Well worth the 2 bills I threw down… whether you believe in ghosts, or not. (BTW, there’s a non-ghost tour also. Jamie took that one) 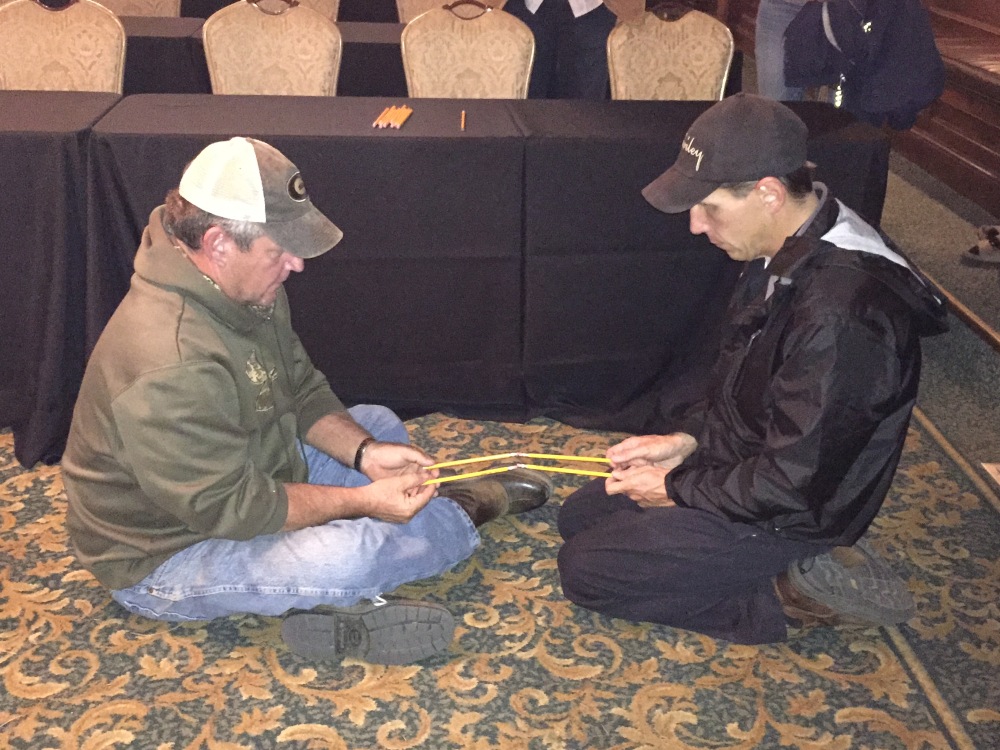 Some jokester scribbled “REDRUM” on the underside of the bell tower door. 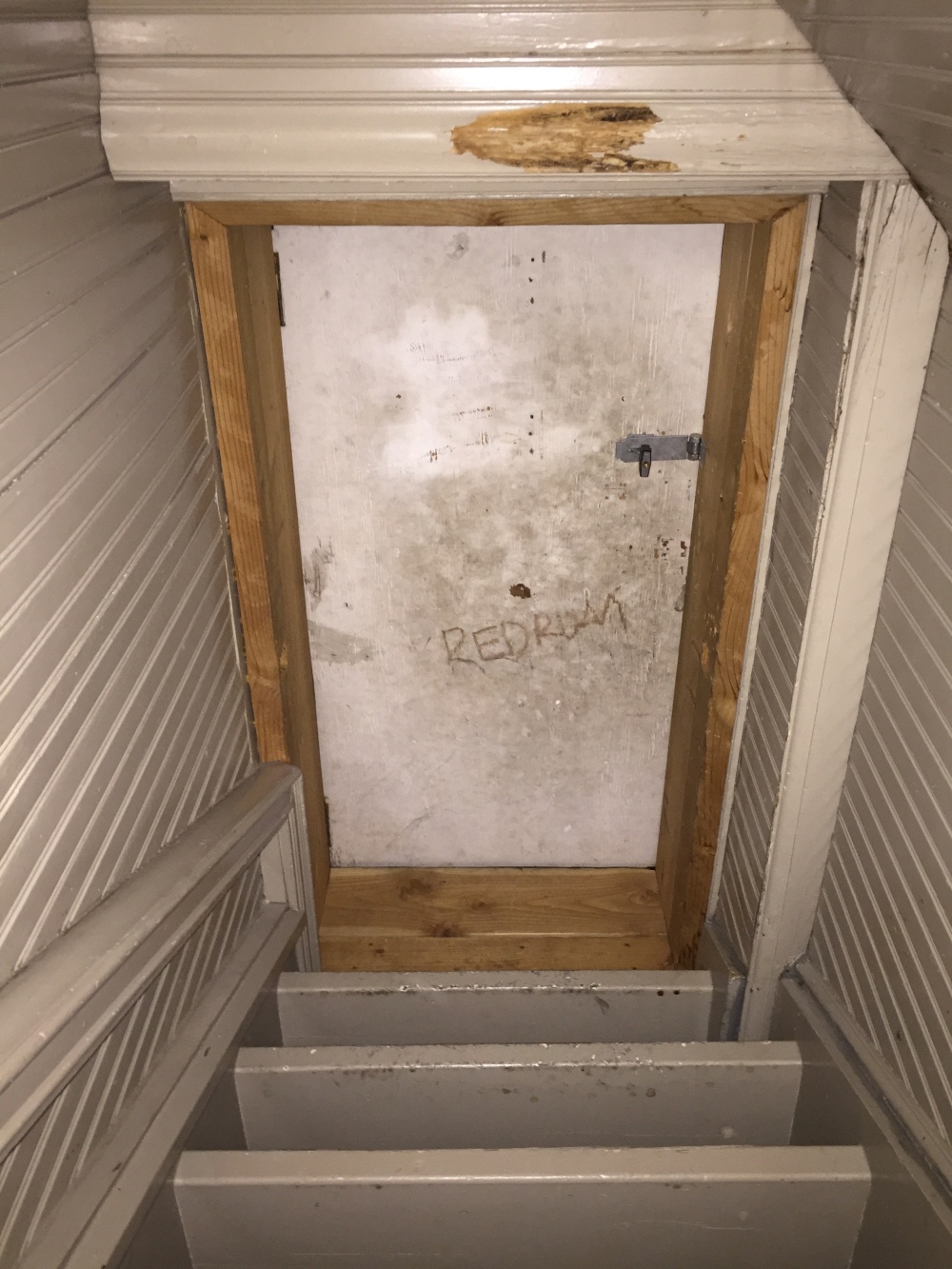 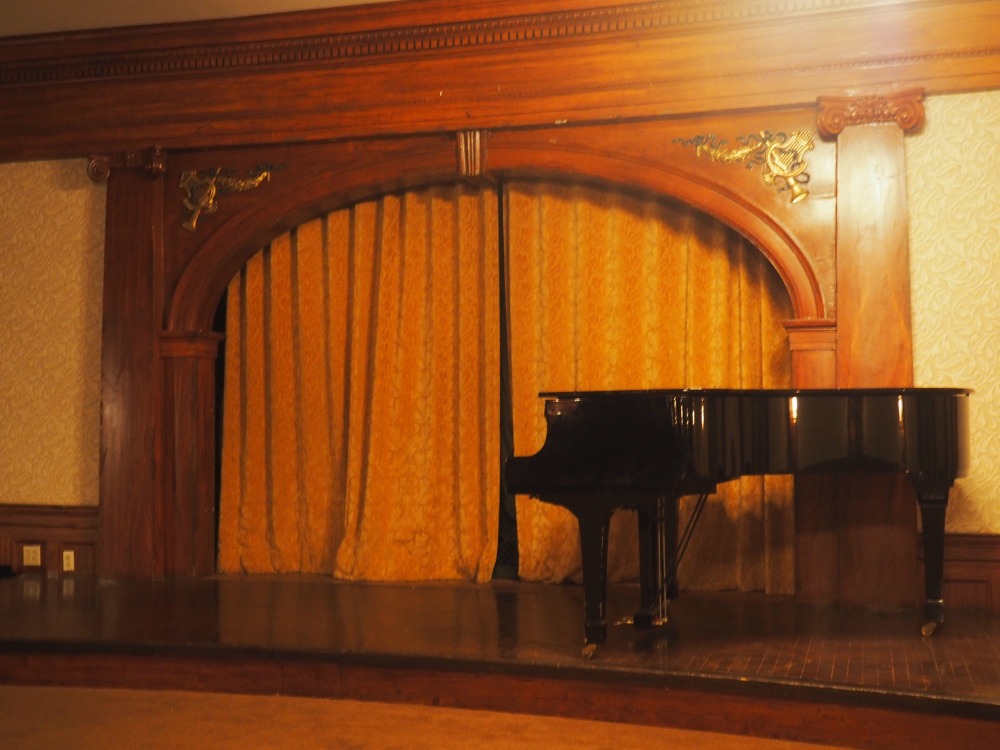 We were lucky enough to stay on the famed 4th floor – the floor where Stephen King had his meeting with the deceased twin girls.

Until the early 1980’s, when the Stanley underwent a major renovation sparked by its inclusion on the National Historic Register, the 4th floor was truly just attic space. There were no actual guest rooms, instead it was used to house staff, and the nannies/children of guests. Hauntings on this floor are much more common than the other 3. Guests complain of door handles rattling, and the sounds of children playing in the hallway at all hours of the night; riding bikes and bouncing balls. (Perhaps the same toy ball Mr King worked into his novel) The front desk also fends off a lot of calls about furniture moving in the attic all night….when the 4th floor IS the attic. There’s a cowboy specter who paces in front of the bed in room 428 and Lord “Cornwallis” Dunraven himself is said to touch guests who dare stay in his room, 401, even though there’s no record of him ever staying in the hotel – he merely sold the land to Stanley.

I wish I could tell y’all that we experienced all these things. Sunday and Monday nights were extremely windy, and the rickety old hotel seemed to shake…..especially the 4th floor. Our door rattled, our windows rattled, and I thought our ceiling fan was going to fall off…..but I’m fairly certain these could be attributed to an old hotel facing Rocky Mountain October winds. Not spooks.

Tuesday night was different; quite a bit louder. I’m not saying all this was paranormal, but I was awoken by all sorts of sounds in the night. Thumps, hushed conversations in the hallway, creaking floors…..and, I’m pretty certain, furniture being moved on hardwood floors. No lie.

…..all the rooms near us were carpeted. 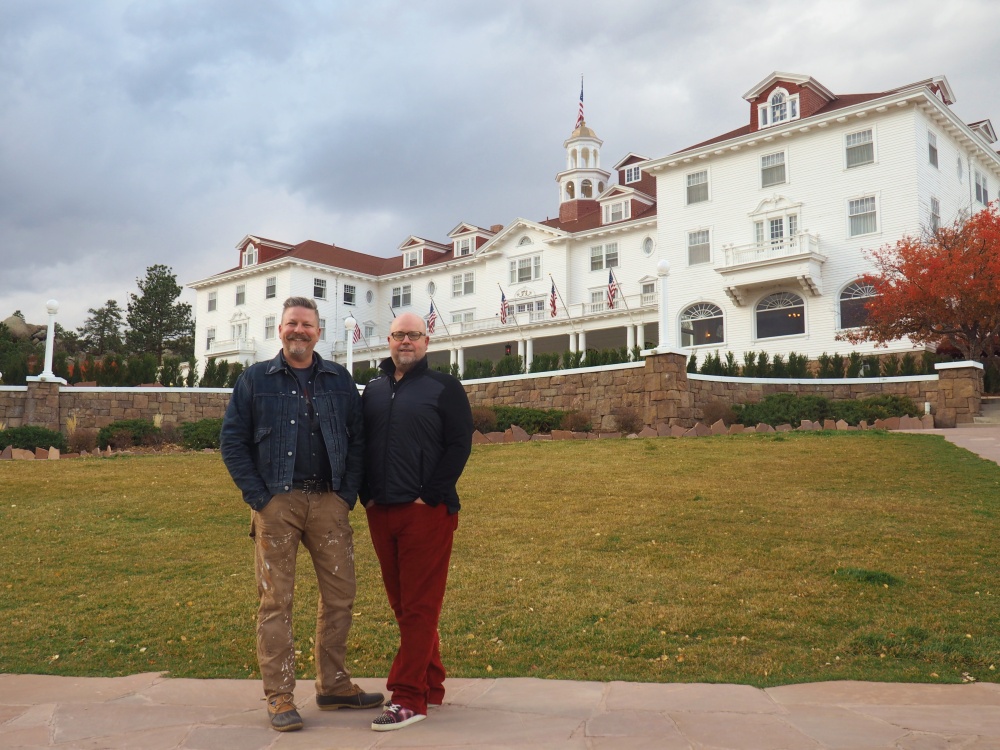 Sure, the hotel plays Stanley Kubrick’s The Shining movie on a constant loop, the gift shop is stocked full of Stephen King books, there’s a ghost tour almost every hour, and even a “Redrum” Punch served in the bar. But, aside from this “influence”,… it’s a simply stunning hotel. Haunted, or not.

There’s truly something special about Estes Park, Colorado and the Stanley Hotel.

Side note* I wrote this post sitting in the Stanley Hotel bar (because there is no Colorado Lounge)….so….

“All work and no play makes James a dull boy.”