If you have followed any of our vacations before, you know that we like a beach.

And who doesn’t? Am I right?

So for this year’s vacation we headed to the other side of the continent and gave Cabo San Lucas, Mexico a try.

And it is the absolute end of the Baja California peninsula. Not quite a 2 1/2 hour flight from Dallas, and yet an entirely different world.

We arrived Sunday afternoon, and our cab driver, speeding through the Mexican desert at 130 kilometers an hour, (knocking that stereotype out of the water) looked us up and down before settling on a mix tape of Phil Collins and the Eagles. Kinda think we should be insulted by that. 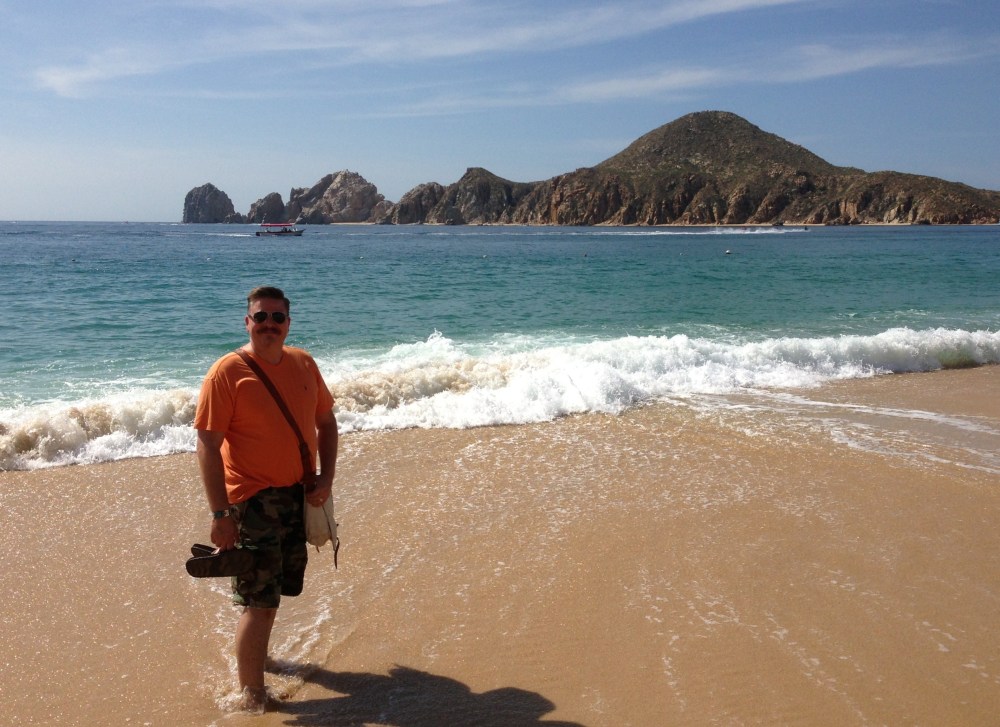 Since we were in Mexico, I thought I’d give my 2 years of conversational Spanish a stretch. But every time I did, I was corrected in perfect English.

Any random Mexican;  “I think you mean, ‘el puerto’, la puerta means door, and you are looking for the port“

It’s as if they honed their English watching Fox News, Cartoon Network, and reruns of Friends. The only television we could find in English.

We found the Mango Deck on the beach and immediately made ourselves comfortable in beach chairs so close to the water that the tide would occasionally pass under them..

The Mango Deck is sort of an MTV beach party, mixed with a Chili’s. There’s a dj (spinning all our favorite late 80’s – early 90’s hits), they have drinking contests, TV and movie trivia (we came in second), wet t-shirt contests (we skipped that one), and tradition Mexican folk dancing by Pepe. The Mango Deck also has a live webcam if ya wanna see any of this live. You know you do.

But not for one second did we feel old there. Not by a longshot. Y’all should have seen the croud…….most of the women there looked like Tom Petty.

OK, not that we did a lot of drinking, every tourist knows there is rarely any alcohol in vacation cocktails, but this collection of pictures makes it look like we did. 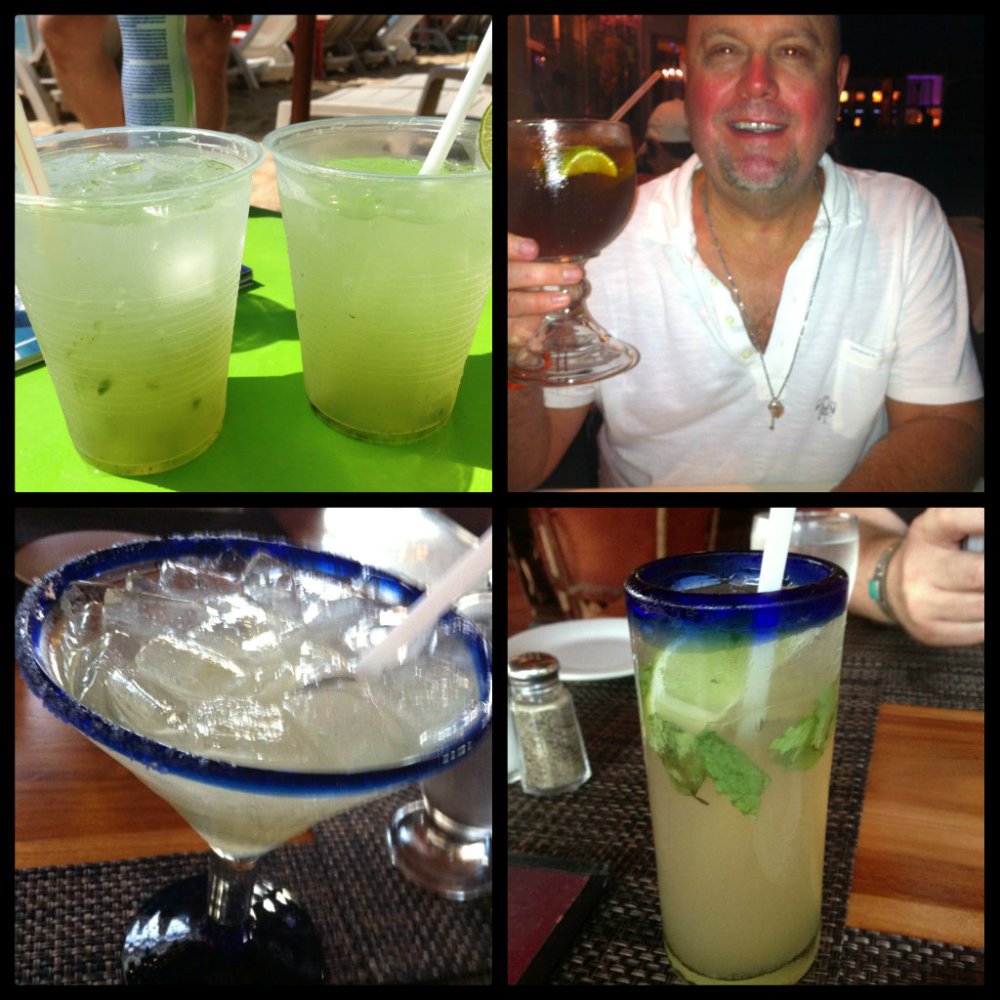 I’m a little embarrassed at all the drink pictures we took. (still managed to post them though, didn’t I?)

There are glass-bottom water taxis – with names like Anne Time, The Kelly, and Bonita Maria – hovering around the beach waiting to ferry tourists to the rock formations, like El Arco, at the southern most tip of the peninsula. For $20 our captain took us on a private tour of the Land’s End, pointing out the rocks formations that look like the finger of God and Scooby Doo……

el Arco, the Arch in English, the most popular formation…… 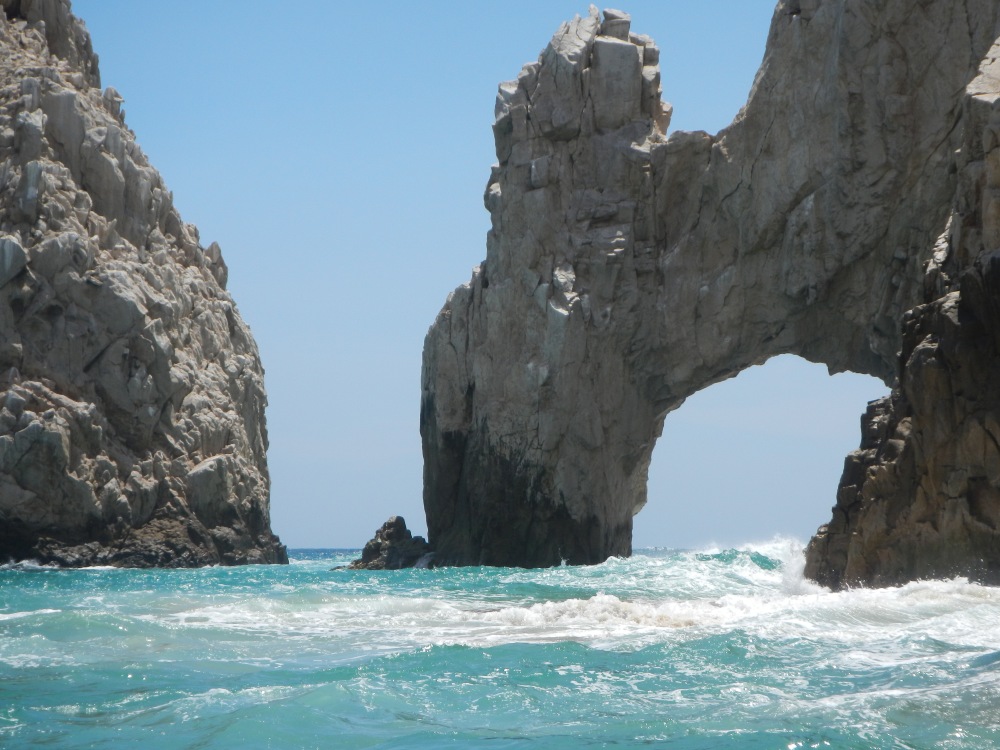 the secluded beaches, hard to reach Lover’s Beach and Pelican Beach with the best snorkeling……..

and all the other formations, including the year-round sea-lion colony.

It was awesome, well worth the trip to Cabo alone.

The next morning we grabbed another water taxi, with Capitan Ishmael, to take us back to Pelican Beach for some snorkeling.

That was amazing too, like swimming in an aquarium. The fish were huge, colorful, and not shy at all. Many of the boats feed them tortillas, and they were expecting some from us too.

This is what it looks like walking behind Jamie on the beach.

He’s always about 30 feet in front of me. Because I keep stopping to pick up sea glass. (more on that later)

The sister resort to ours was the Villa del Arco, they had a bar in the middle of the pool shaped like a pirate ship. 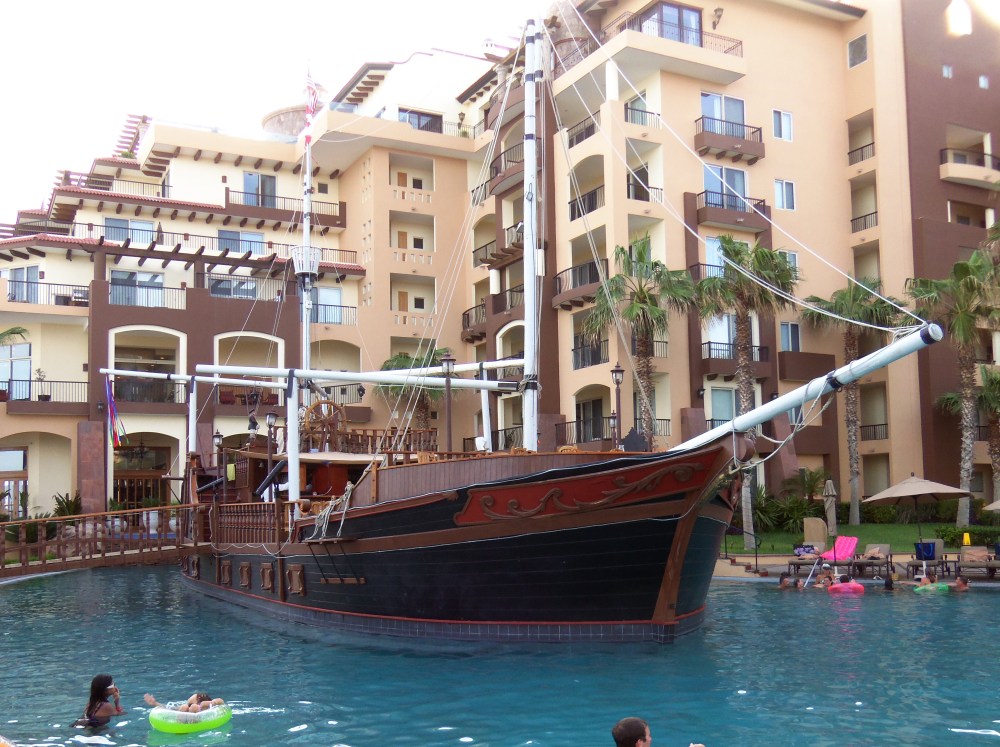 Because my brother Ben wasn’t there to take our staged pictures, and no one ever offered to take a picture of us, there aren’t any couple shots. 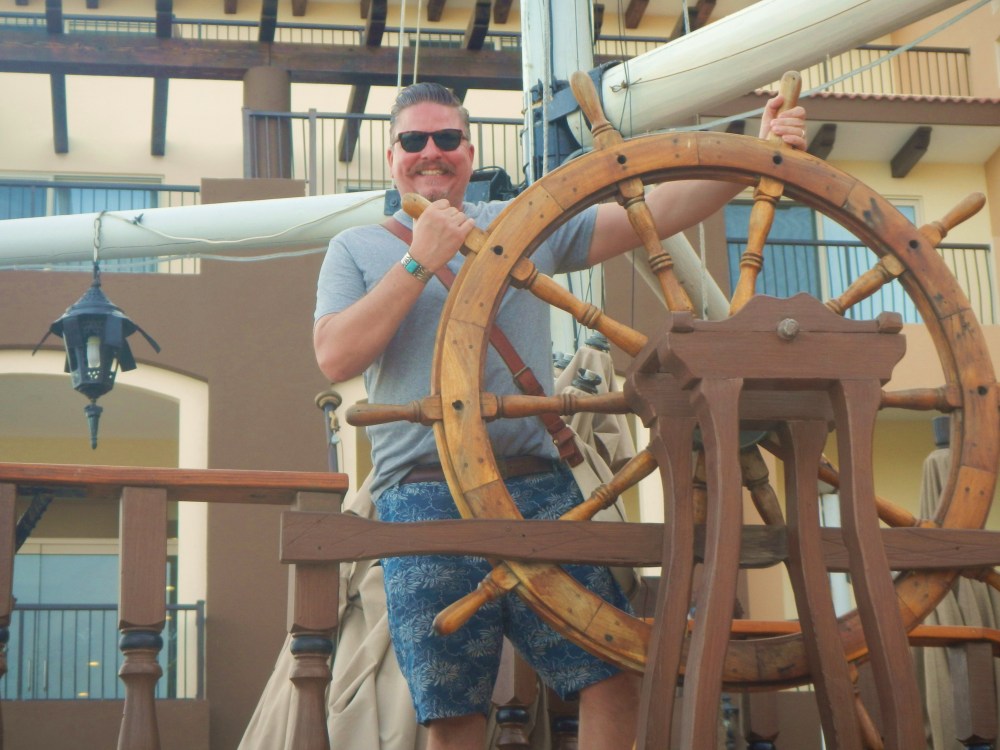 Dinner at the Villa del Palmer, our resort, was on the balcony overlooking the Playa el Medano and the Bahia San Lucas. Almost, but not quite, the Pacific Ocean.

Here’s what the sunset from our dinner table looked like.

Seems like a great vacation, right? Just you wait…….

This wasn’t new to us at all.

Last year we were chased out of Key West by Tropical Storm Isaac. The year before that we landed on St Croix and hour before Hurricane Irene beat down on the sad little island with us on it.

Yes, we have danced this dance a couple of vacations now.

Wednesday evening in the early stages of Tropical Storm Juliette, we made our way to the only place in the Villa del Palmer serving food, the open air patio facing the ocean, (what were they thinking?)  We huddled under a beach umbrella trying to stay dry-ish while several other groups of American tourists did the same thing. Americans are a determined people, that’s for sure. I ordered pasta, Jamie a pizza, and we watched the ocean rage and the not too distant storm obscuring the mountains across the bay while we waited for our food. Every time our poor waitress came to the table……she was wetter and wetter; until she finally looked like a drowned kitten.

When the wind knocked a nearby table over, one of the other guests said, in his best Carl Spackler voice, “I don’t think the heavy stuff is gunna come down for quite a while”. Perfect quote for sitting in an outdoor cafe in the middle of a tropical storm and trying to pretend that everything was normal. We took our food to go and trudged back to our room in the downpour.

The next 2 days were a wash.

The storm water washed away the road to the resort, so most of the staff couldn’t reach the place. Even after the storm passed the sky was hazy and the ocean was way too rough to even attempt swimming in. There weren’t even any party catamarans or water taxis on the bay.

You know it was bad if the Mexicans were passing up tourist money.

It should be noted that the residents of Cabo (sometimes in 30 second intervals) tried to sell us everything under the sun; blankets, pottery, silver jewelery, fishing trips, time-shares, nose candy, ecstasy, cocaine, and good weed. None of them ever said, “weed”…..it was always, “Good Weed”. Like the idea of Mexican jail, was something we wanted to experience on our vacation.

One evening we were walking down a city street and a girl appeared in a doorway asking if we wanted massages. “No gracias.” Once we passed her, suddenly 2 dozen others, who had heard her call, popped out of their respective doorways and bombarded us with massage offers too. “No gracias”, “No gracias” Did they think we missed the first 20 putas? And why was “Whore Alley” so close to the Hard Rock Cafe?

We weren’t buying any of what those chicks were selling either. Like the idea of Mexican chlamydia was also something we wanted to experience.

Friday, mid-day we hoped our asses on plane back home to Dallas.

And that’s where I sit, at my favorite desk, compiling all my pictures and notes into something for you fine folks to read.

Overall, good trip. But, boy, we are glad to be home.