Remember a few weeks ago I told y’all that Jamie and I had been together for 10 years? I did, scroll back a little. Well, we thought we’d do something extra special to commemorate, like a trip.

A once in a lifetime trip.

Neither of us has ever been out of our hemisphere – so we flipped a coin and landed on London. It’s not too far, not too exotic, and best of all…they speak English.

(Maybe not exactly the English we learned in the Texas school system, but some form of it) 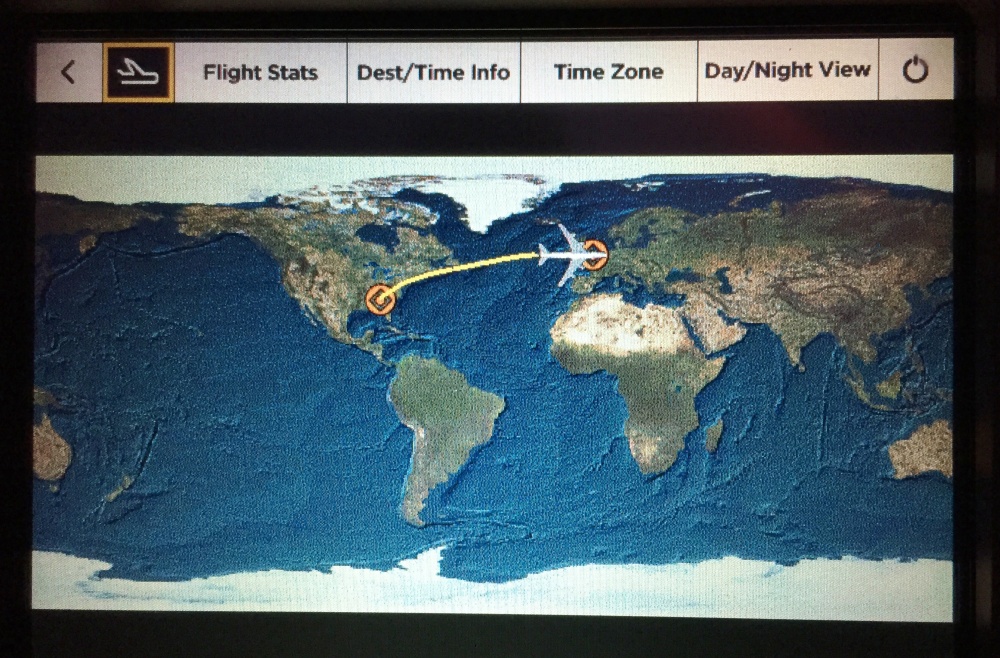 The 8 hour flight on Virgin wasn’t really that bad. Our little veal-feeding pens included a travel pouch with some toiletries, a sleep mask and my favorite part, clean socks. Because we took an overnight flight, we were given “sleepsuits” which is a pretty silly name for what turned out to be “Jim-Jamz”. (and after all, who isn’t much more comfortable in head to toe polyester?) And, of course, our seats folded down into little, well, let’s just call them “beds”. 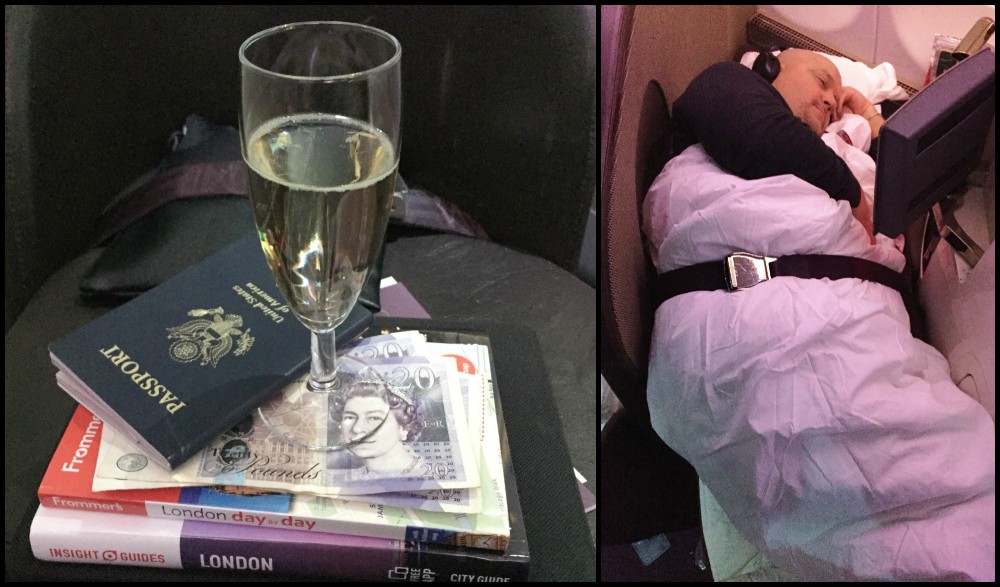 I’ve actually been unknowingly prepping for this trip my whole life. I’ve watched every season of Keeping Up Appearances, Fawlty Towers, Coupling, The Young Ones, Man About the House, Absolutely Fabulous, Footballer’s Wives, Are You Being Served, and a few episodes of Spaced.

I was ready……. Luckily, we didn’t need that last word.

Here’s a small taste of our London adventures that we thought we’d share with you kind folks.

Our first order of tourism, was the Hop-on-Hop-off bus ride around the city on a red double-decker bus. 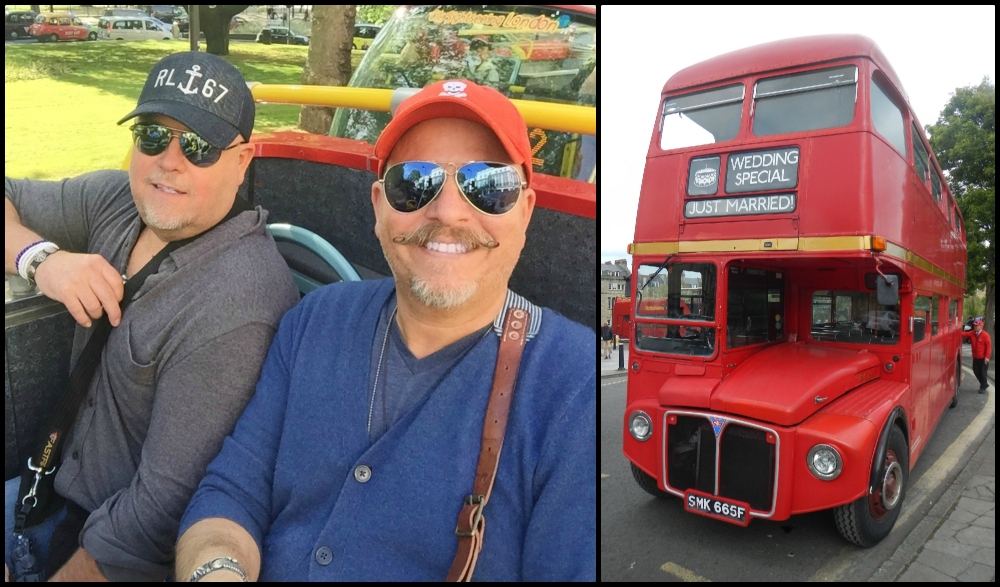 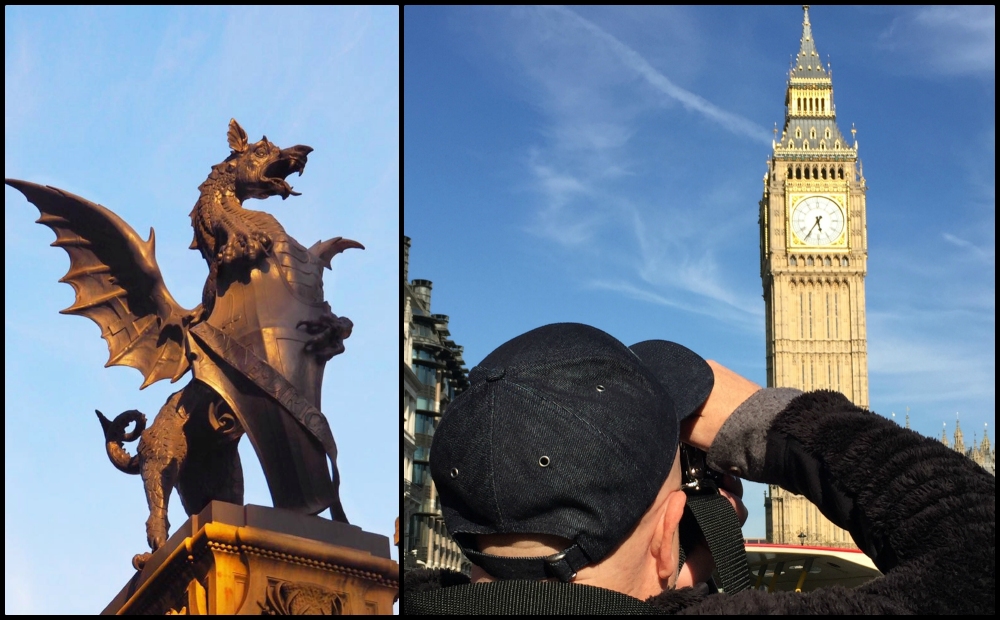 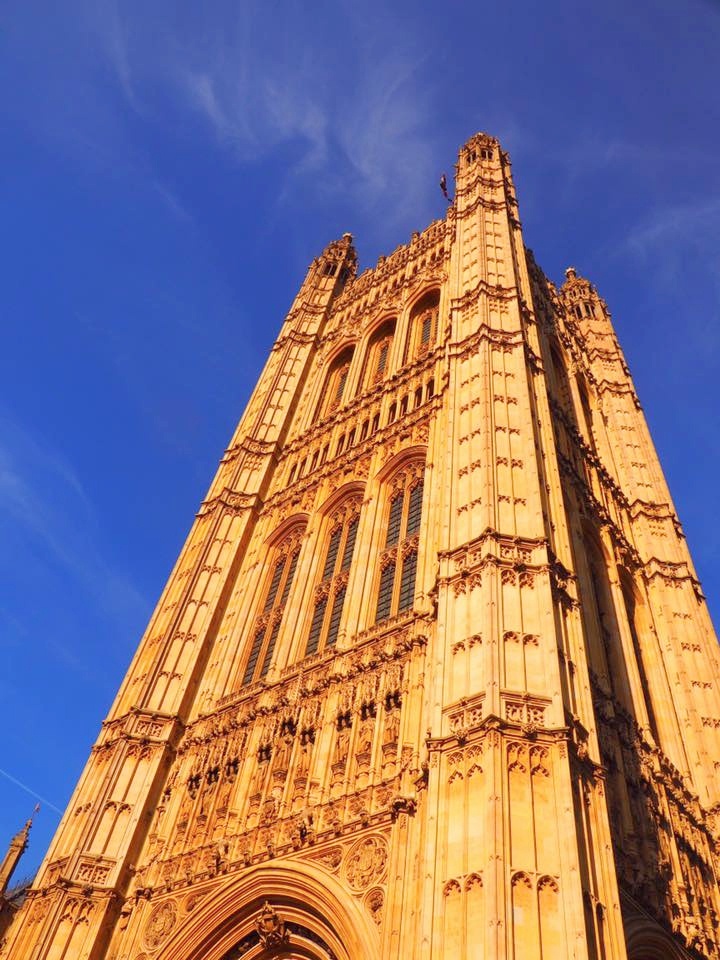 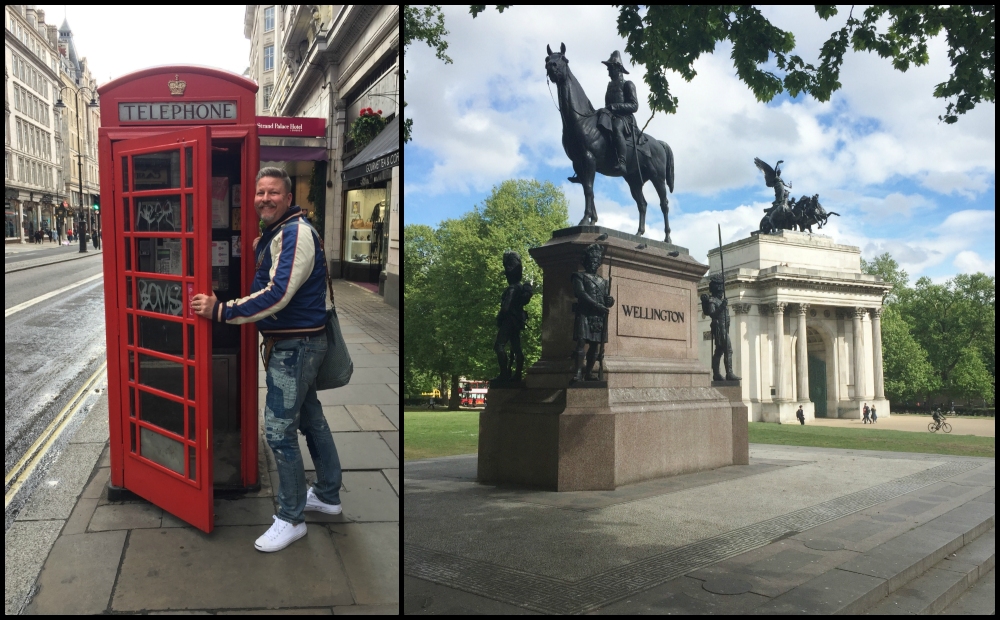 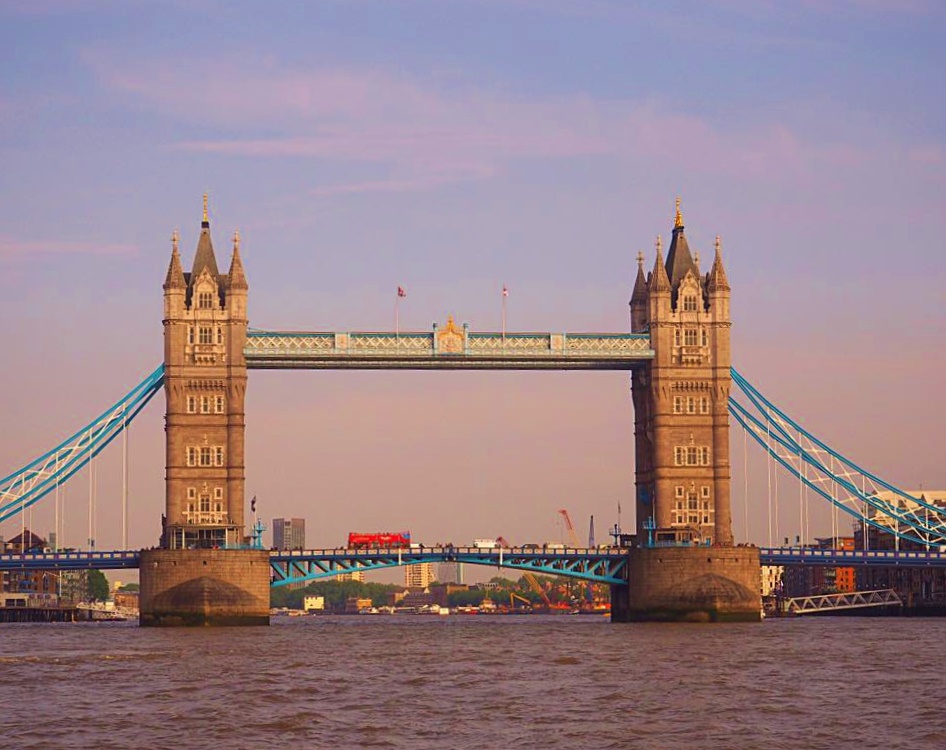 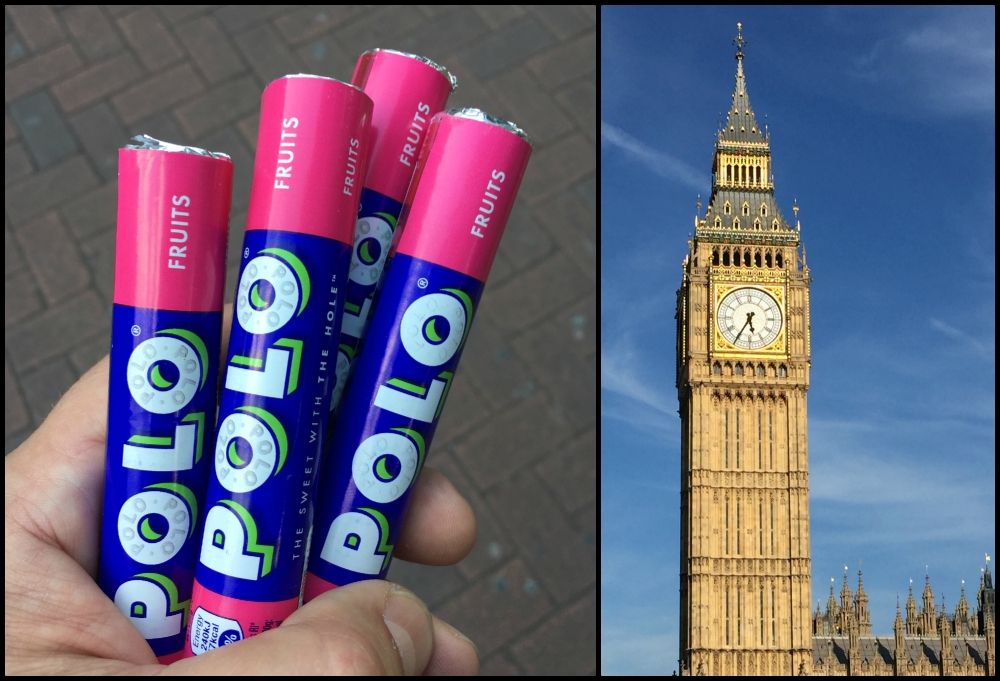 We “hopped off” at Buckingham Palace to check on the Queen… 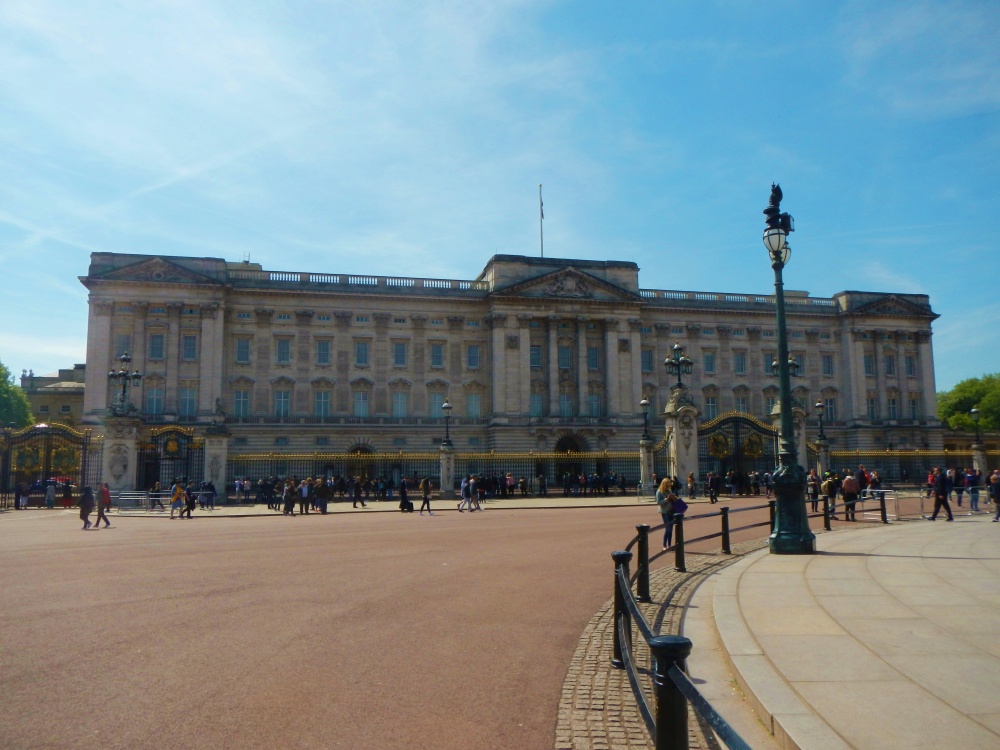 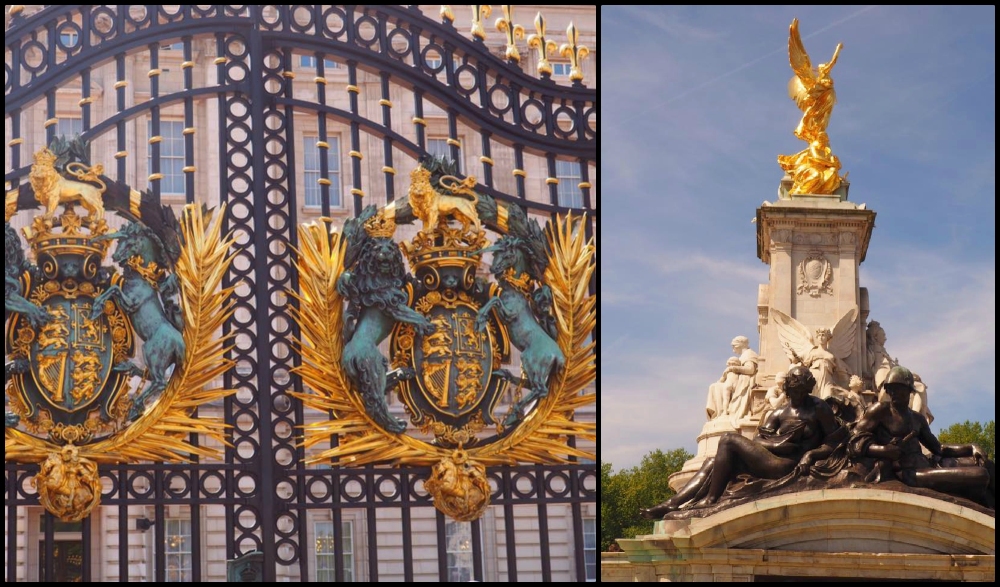 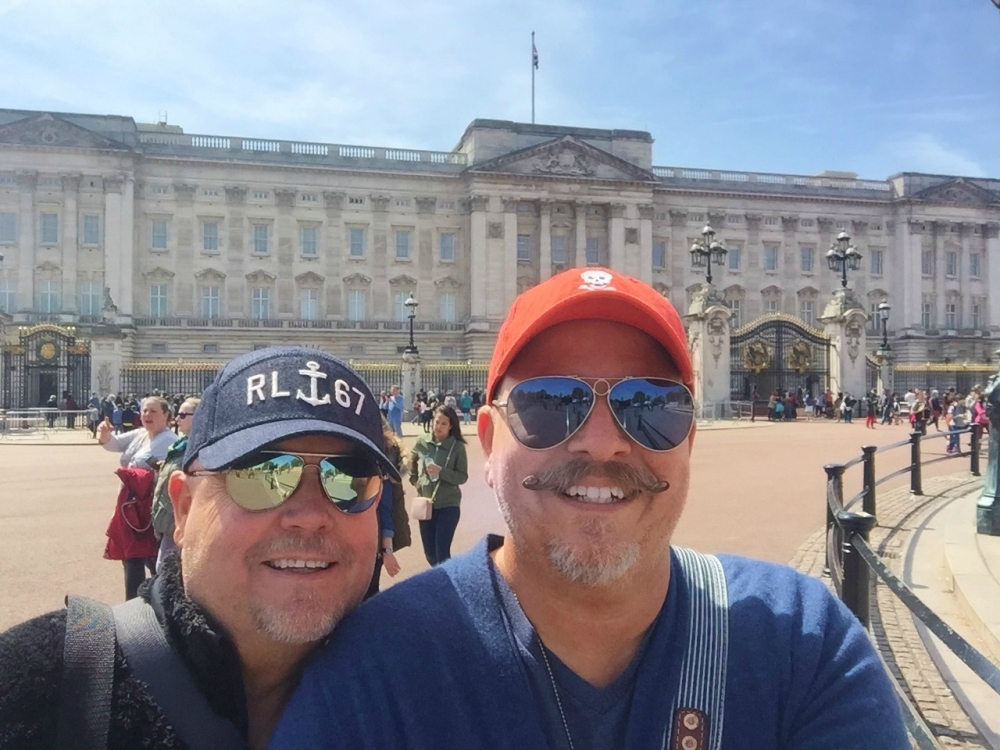 If the Queen is in residence, and she wasn’t this time around, they fly the Royal Standard flag over the palace. If not, they fly the Union Jack. Pretty interesting, right? We never knew that.

Turns out that the Tower of London isn’t really a tower after all, it’s a castle, and it’s also where the Crown Jewels are kept. 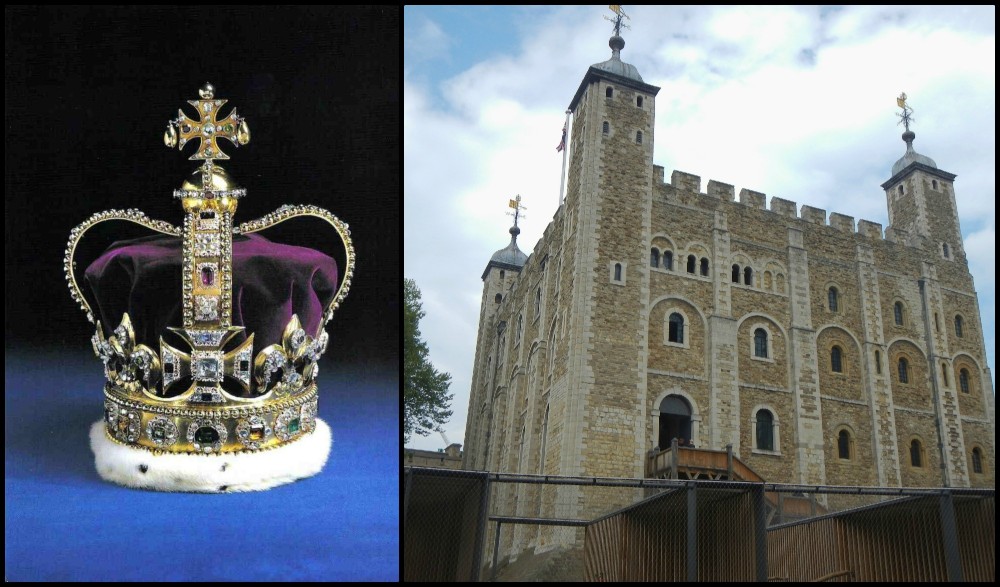 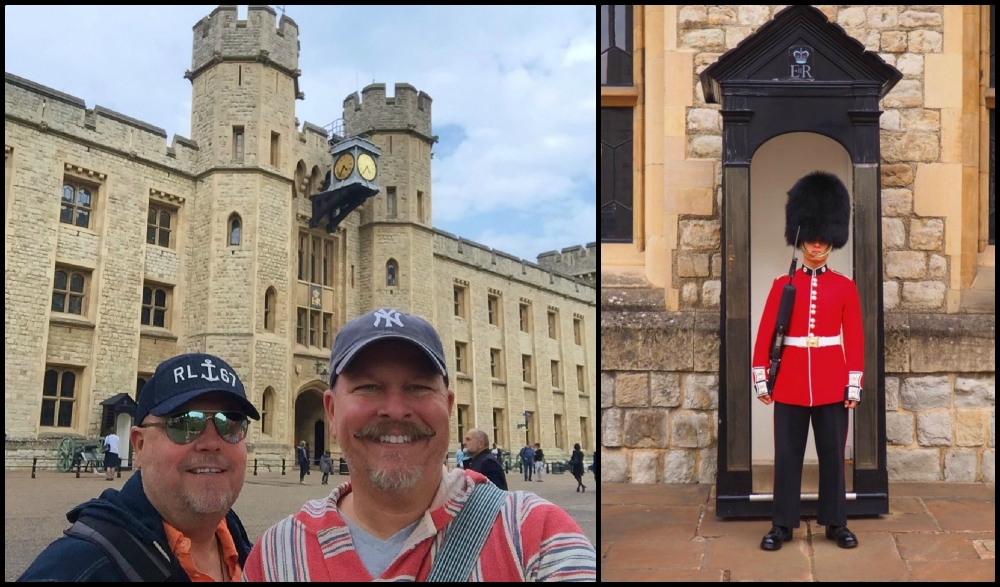 On busy days, the line to see the Crown Jewels zig-zags endlessly in front of this building. But to speed things up, on the inside (photo taking is prohibited) there’s a moving sidewalk/conveyor belt in front of the display cases. That way, everyone gets to look at the jewels the exact same amount of time. Just Brilliant. 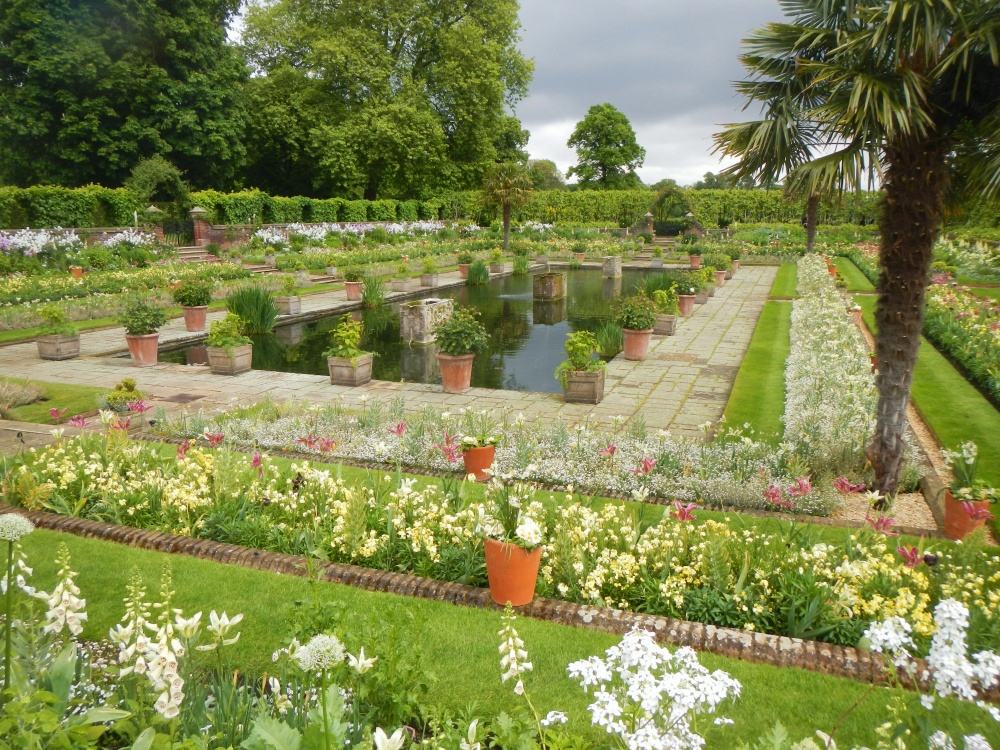 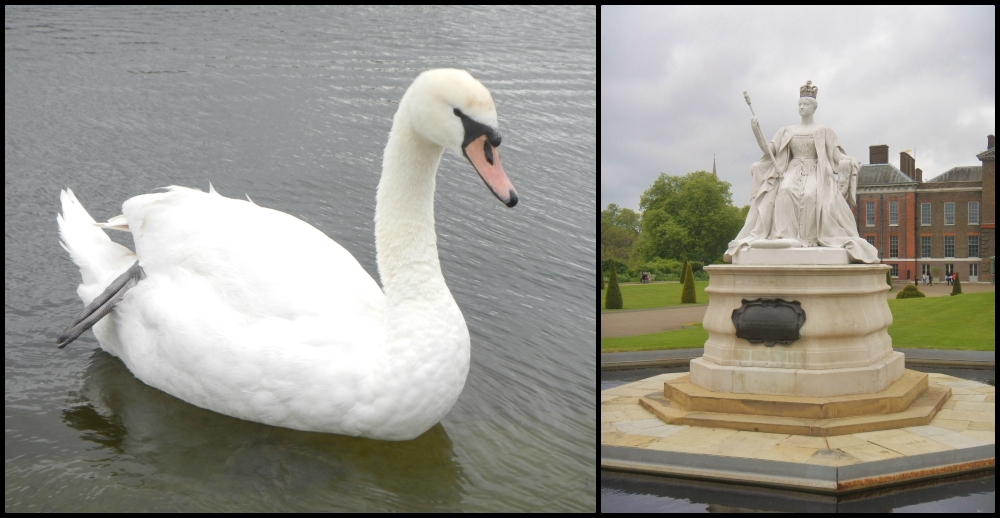 Our hotel was only a block from Trafalgar Square…

and the National Gallery. (BTW, all the museums in London are free, they simply ask a suggested 5 pound donation….Suckers) 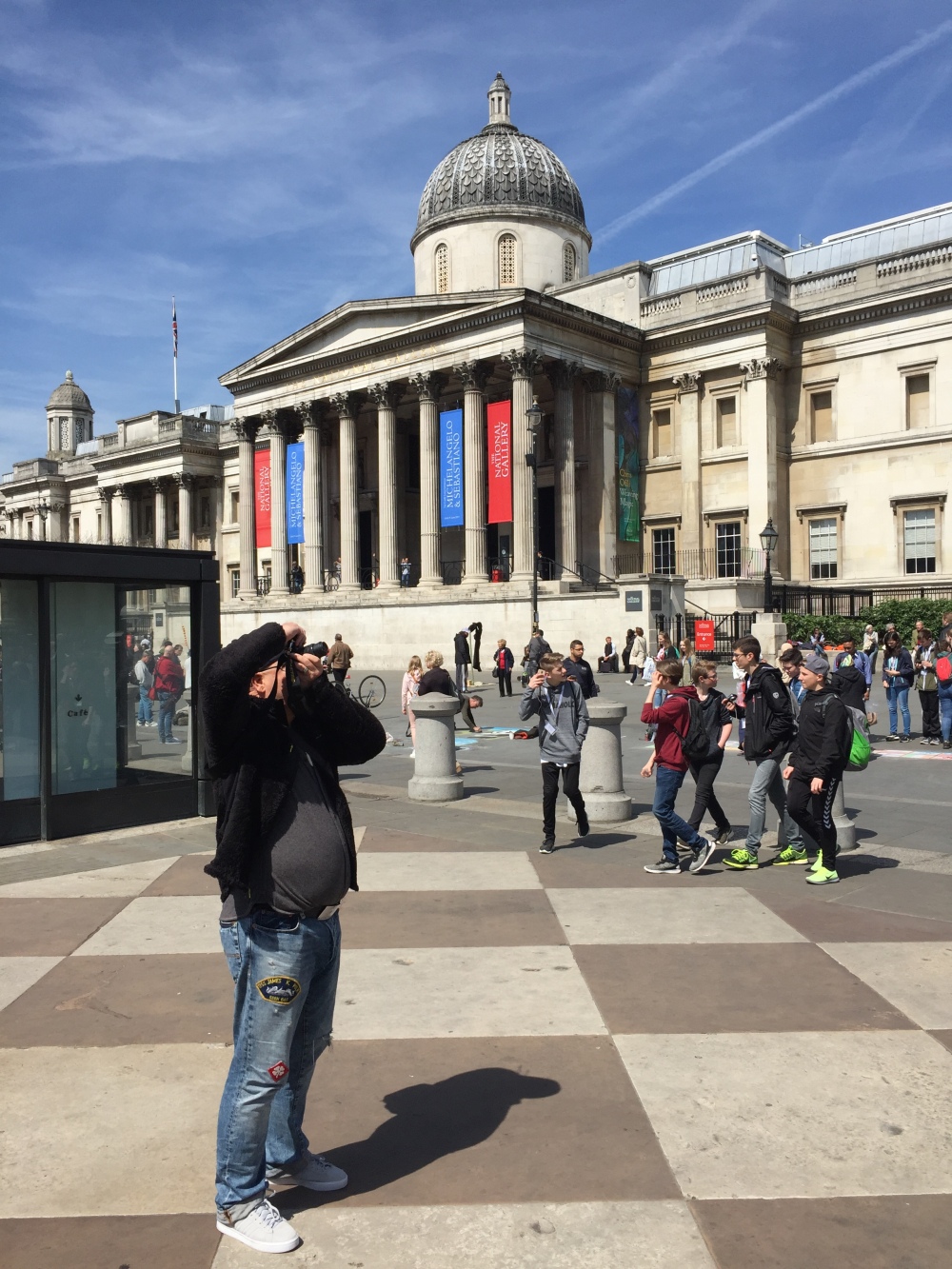 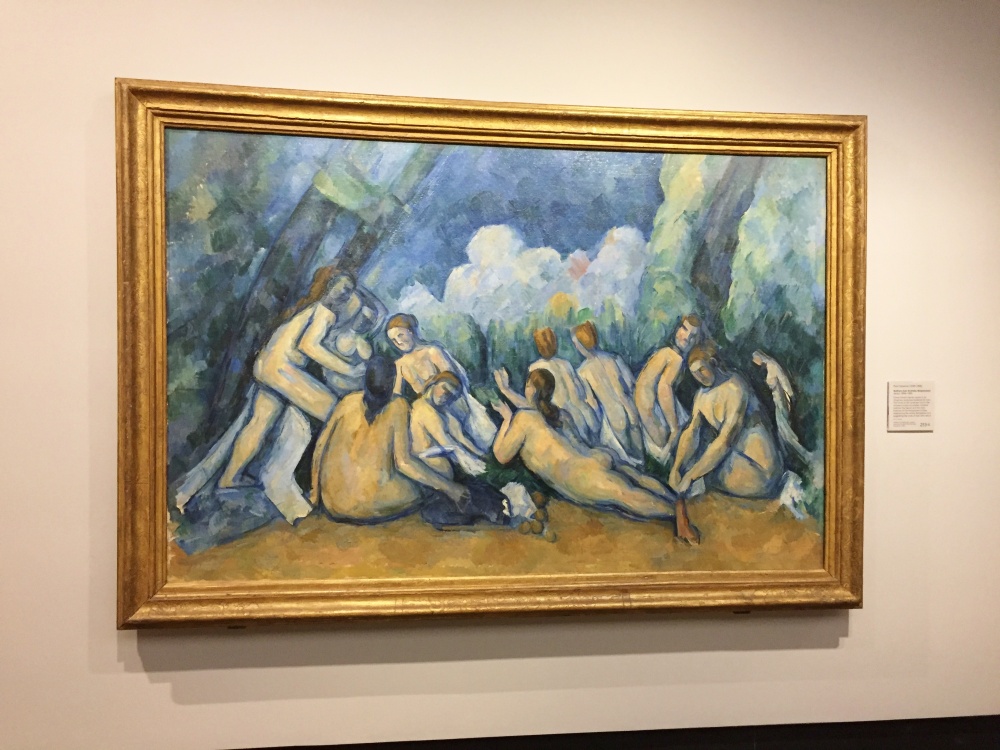 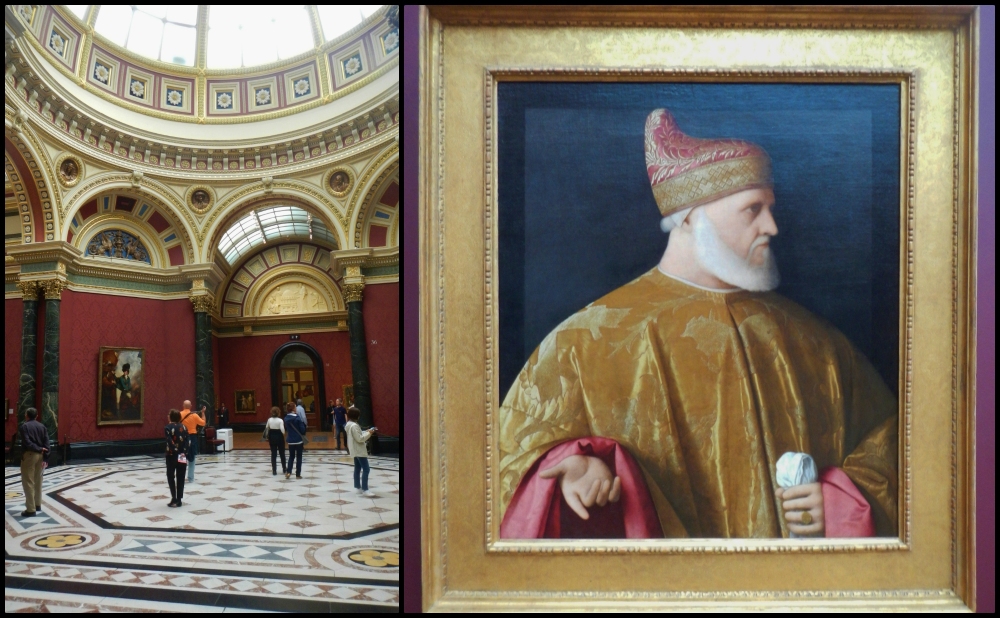 We were surprised by how many uniformed school children were in the National Gallery. 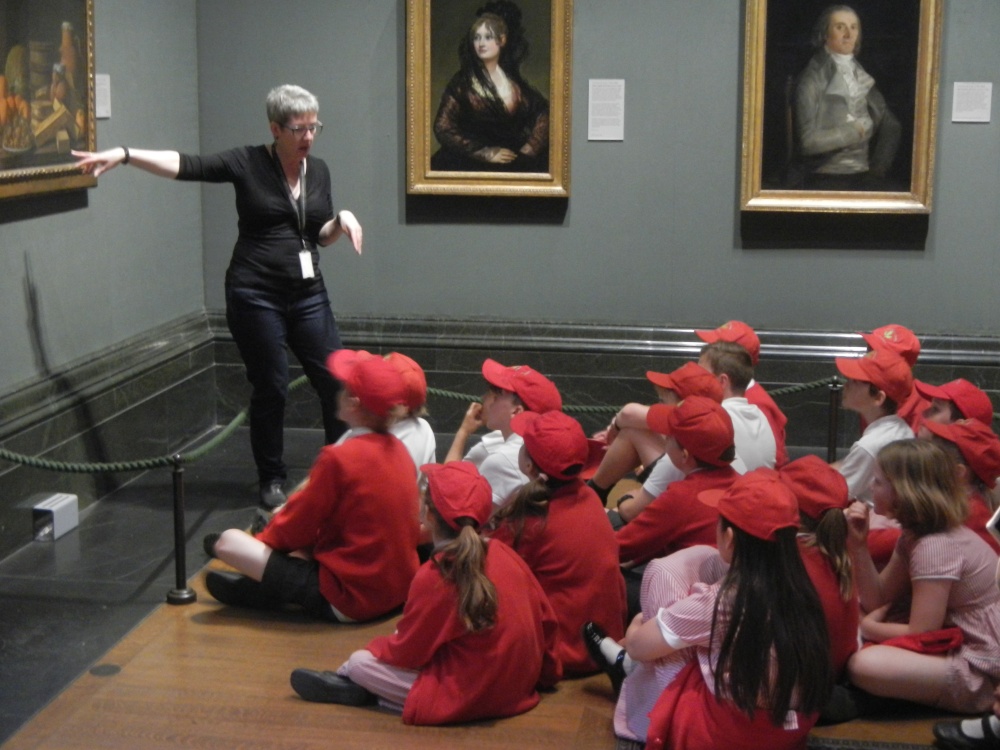 I was promptly scolded by one of the docents to not photograph the kids. I felt compelled to tell her, “I’m sorry, but I’m American and I’ve never seen children learning in a museum before.” I just had to document it to show the rest of my countrymen. And I just know that y’all would never believe it without this photographic proof. Like UFOs, or Sasquatch.

Jamie even discovered a new iced tea. I watched the bartender brew a cup, shake it with ice and a splash of milk, then strain it into a glass filled (*by European standards) with Sonic ice. Earl Grey is now his new favorite……it used to be Lipton. 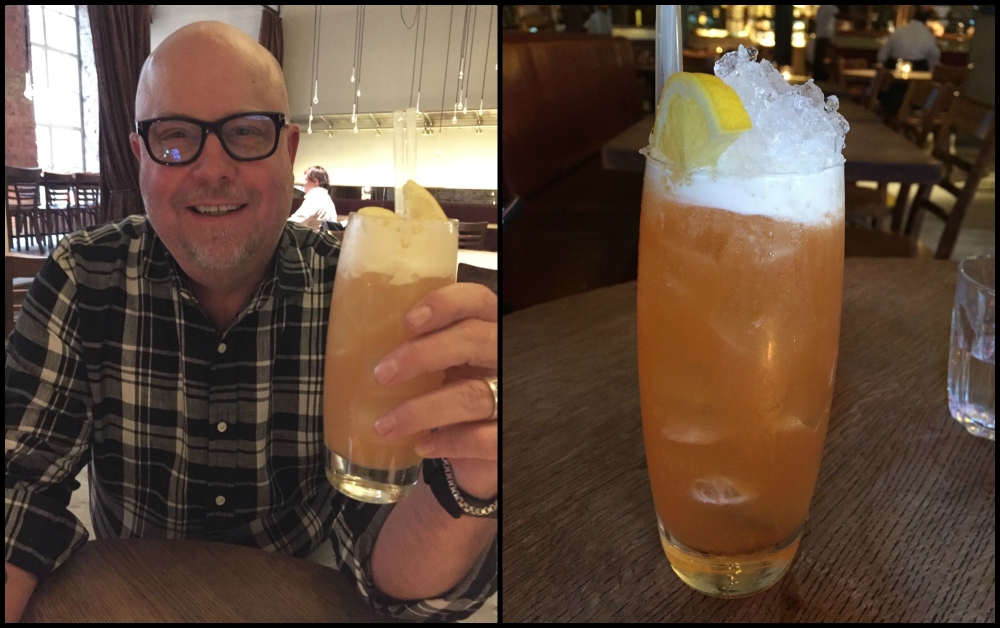 A mere 2 hours outside the city is Stonehenge. It’s a big stone clock/calendar thingy most likely built by the Druids. Nobody really knows…..it’s all just speculation. The funny thing about Stonehenge, and trust me, there aren’t many funny things about possible Druid monuments, is that it’s so much smaller than you expect it to be. Still pretty impressive. 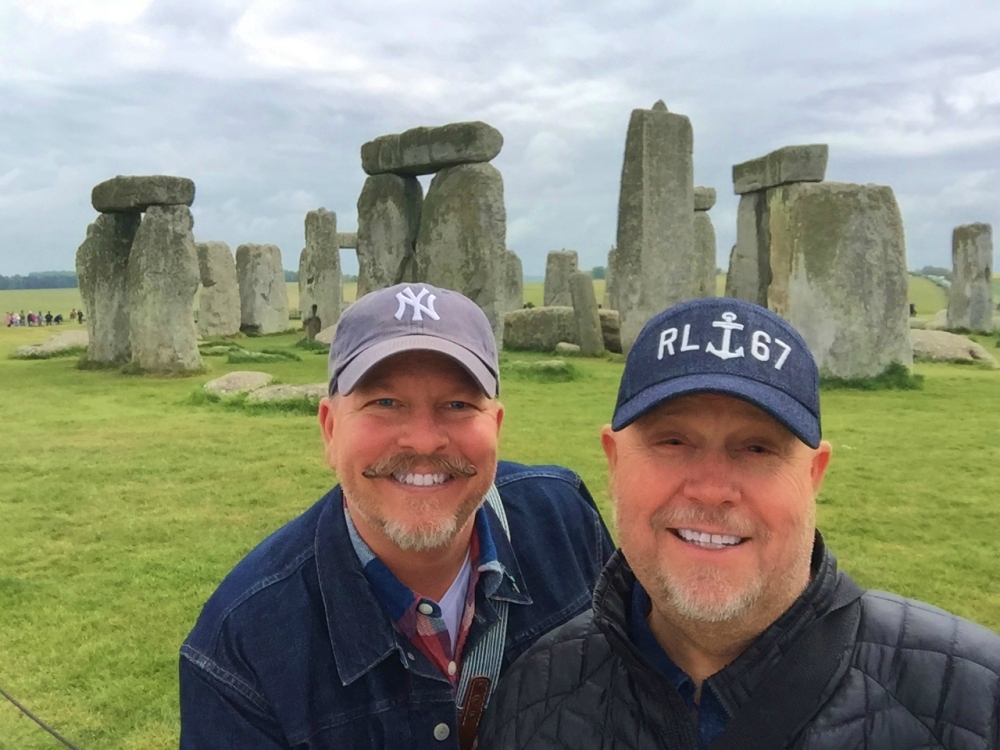 Until 1977, you could just walk right up to it. But for fear of some clumsy tourist knocking it over, it’s now protected by a thin barrier of shin-high black string. 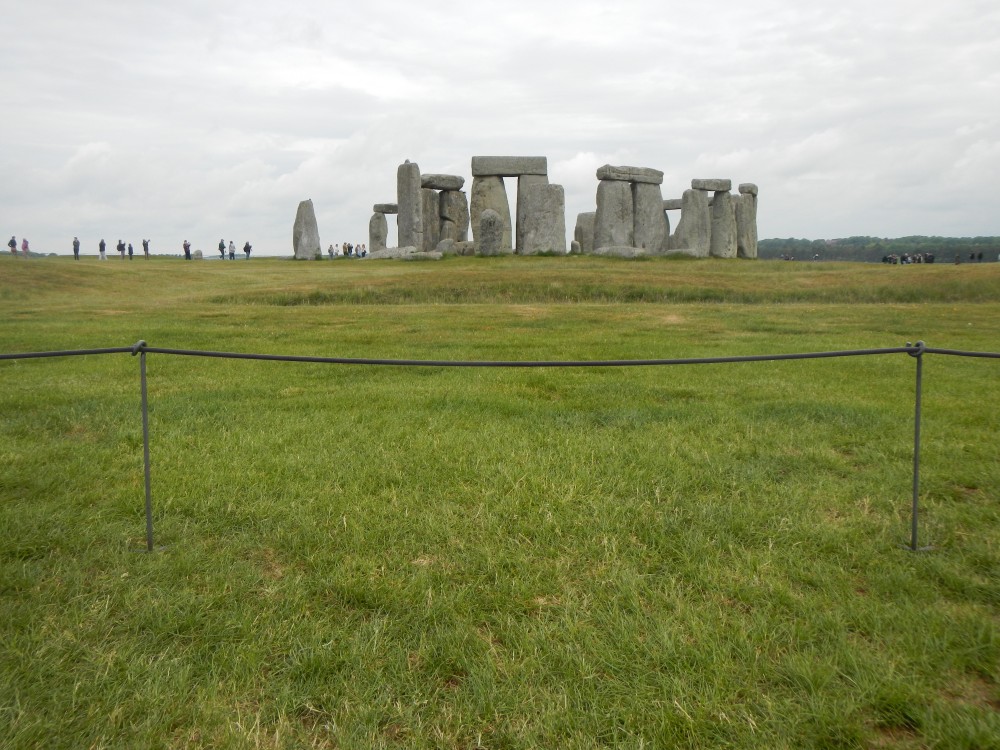 Our tour group had an odd assortment of tourists and naturally we nicknamed a few of them. There was; Indiana Jones Hat, How Old is her Baby?, Hollister Sweatpants, Vampyria, Captain Cardigan and his mistress – Side Pony Tail. The last 2 sat directly in front of us on the bus and they kept licking each other’s faces like they were cheating on their real spouses. Of course, they were Greek. Which explains her “going out to the club after this” makeup and his thumb ringS.

After Stonehenge, our tour bus drove through Cotswold, to Bath (Highly recommend this city if you can) Bath is the home of a natural hot spring, and was once a luxurious Roman city renown for their spas. The spas are still there, but the Romans left centuries ago.

We ended the day in Stratford, the childhood home of one William Shakespeare. That’s his house right behind us. 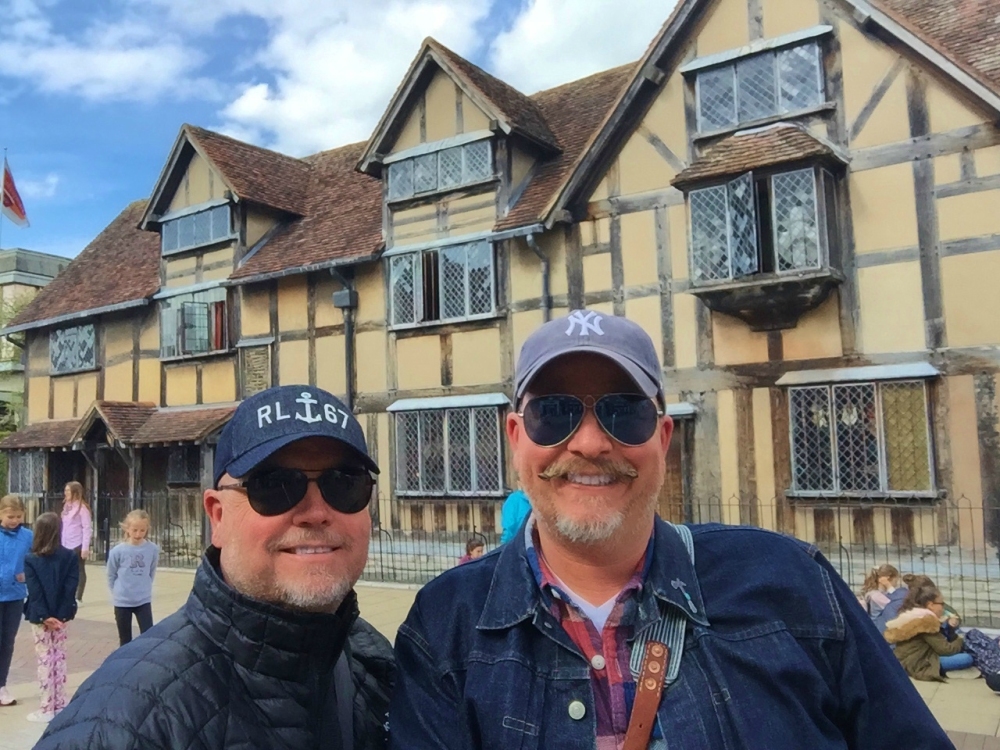 I’m sure Mr Shakespeare would be thrilled to know that his childhood home is only 4 doors down from a Subway sandwich shop.

We ended our week with a champagne toast on the London Eye. 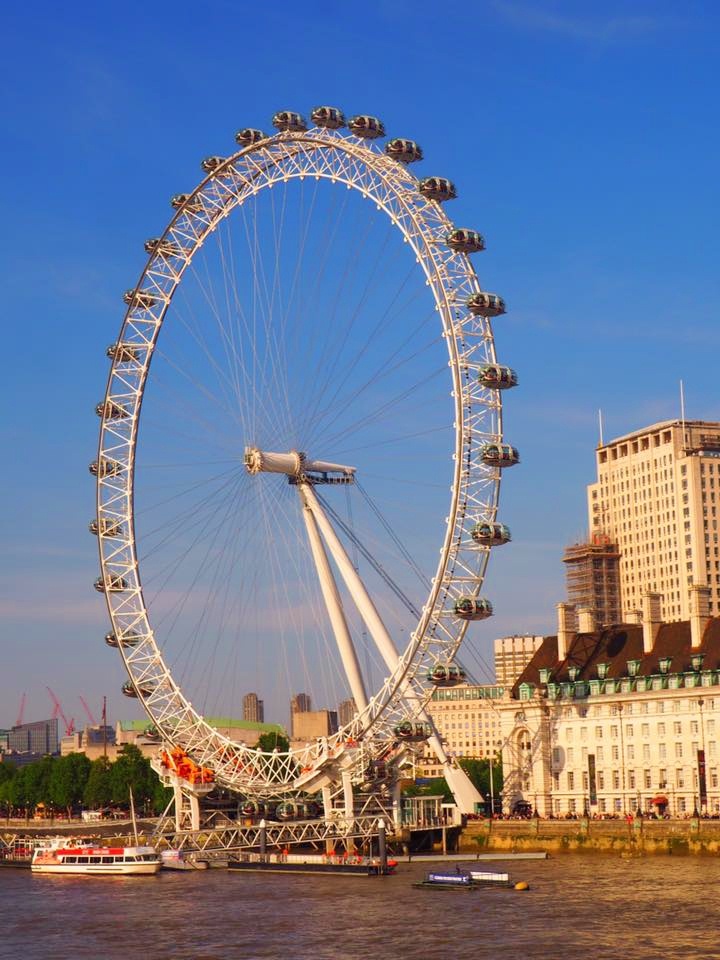 It looks like a ferris wheel, but don’t say that to a Brit. At a speed of .06 miles per hour, one revolution takes about 30 minutes, and takes the pods up 443 feet in the air. The view of the entire city is just spectacular. 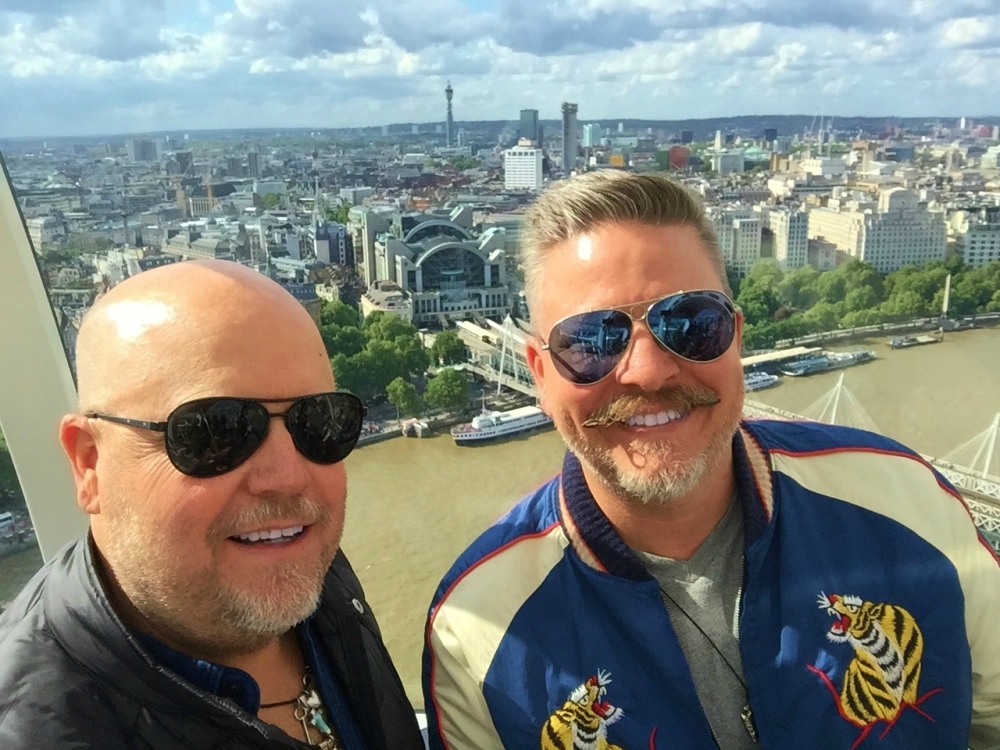 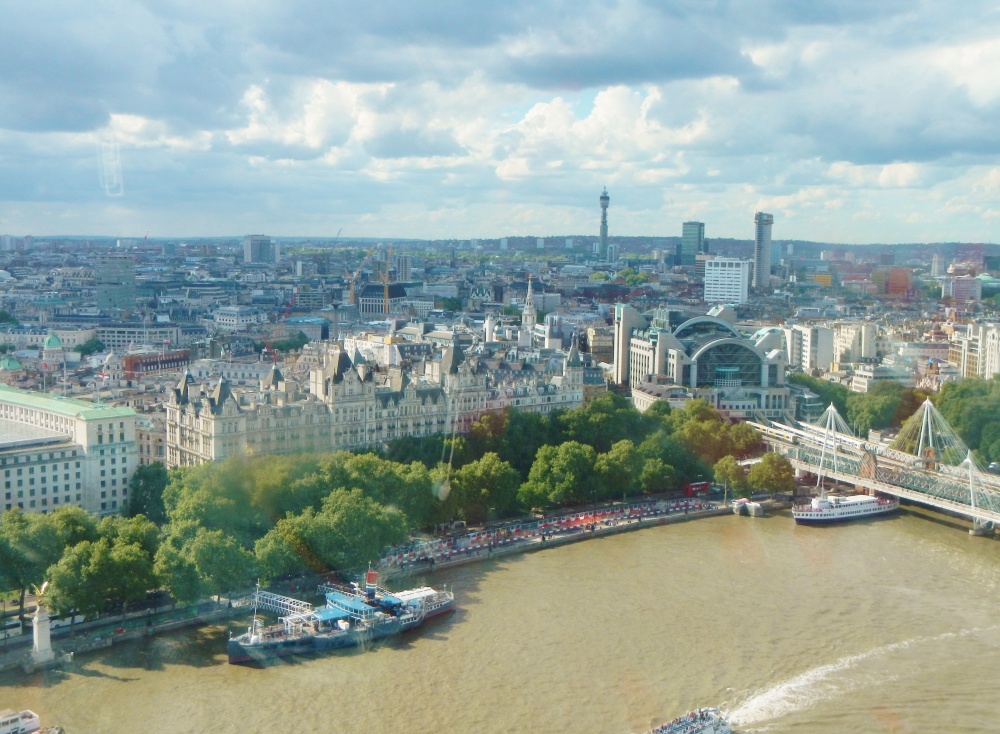 Shout out to our dear friend Kylie for setting us up on all our tours and excursions. She works for AAA Travel.

Such a great trip. We learned so much about Shakespeare, Winston Churchill, J K Rowling, Henry the Eighth, Elizabeth the Second, Diana, Benedict Cumberbatch, and for some reason, William Wallace. Honestly, William Wallace came up more than anyone else. My guess is that they want everyone to remember what happens to you when you defy the crown. (He was drawn and quartered)

And on that note, by the end of the week we were tired of touristing and ready to head back to Texas, and Harley Davidson, and our house with 2 almost functioning bathrooms.

Here’s a rare moment. In a city of almost 9 million people, most of which were pressed up against us the entire week, somehow we were almost completely alone on the street the morning we left. 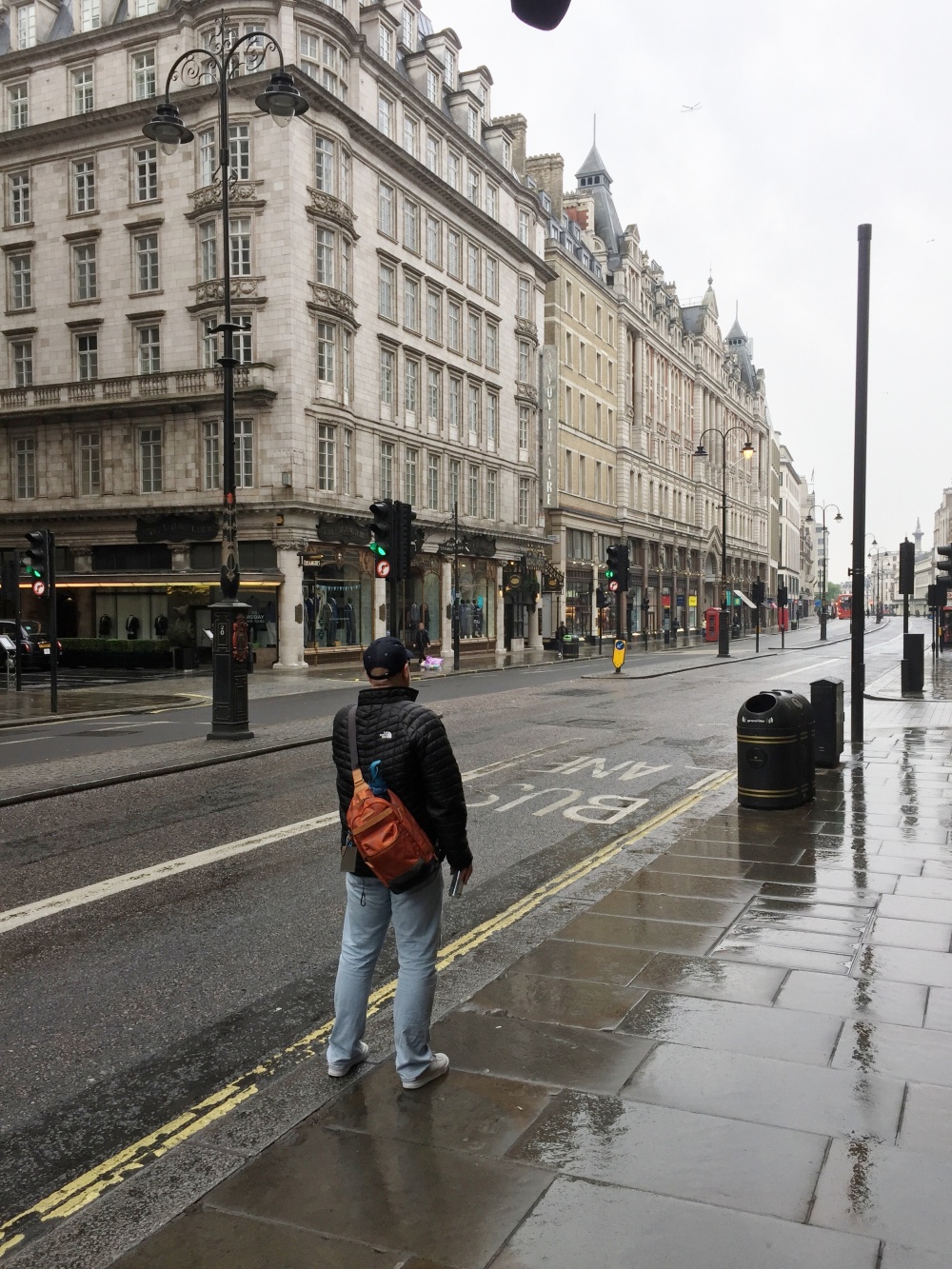 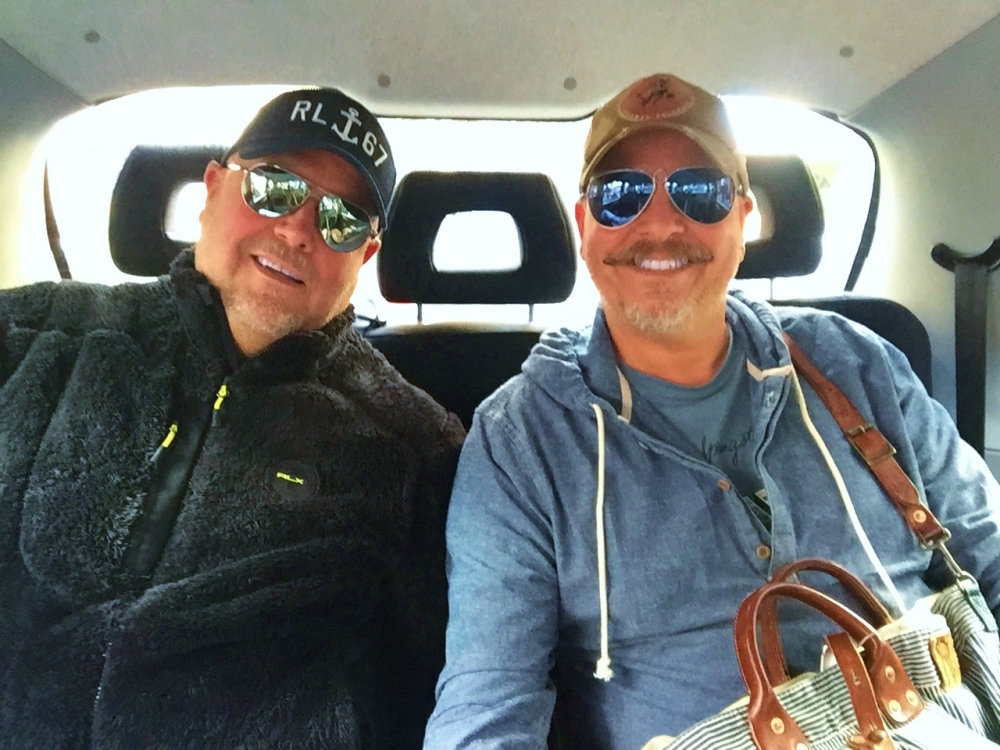 But not before finding the perfect little memento…..to cram onto the Christmas tree… 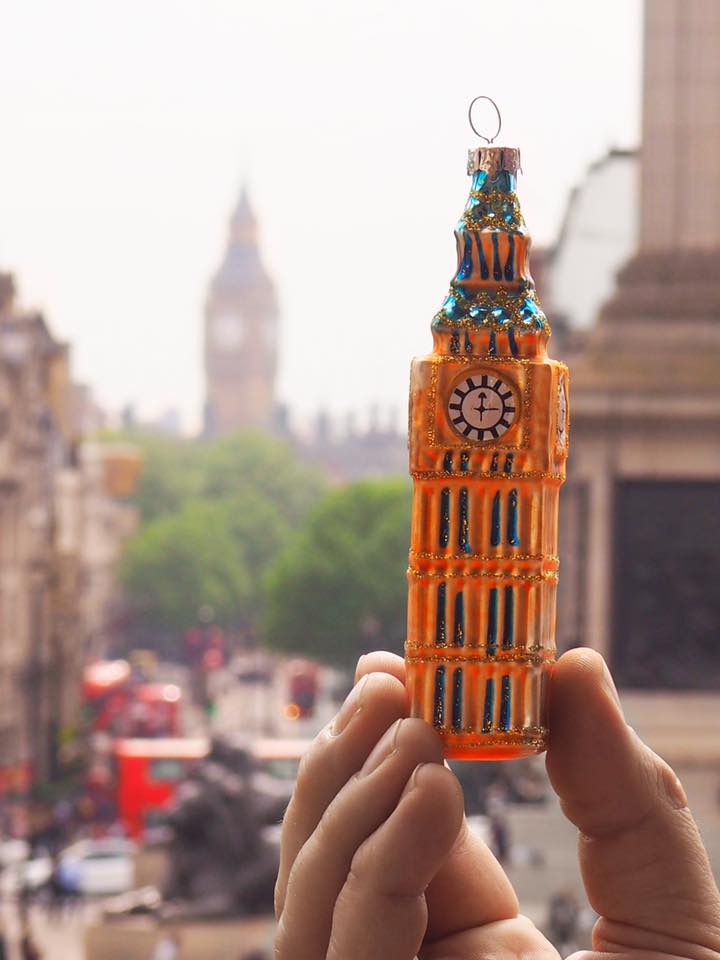 Maybe now we can go back to pronouncing tomato like Americans again.

And stop using the adjectives “brilliant” and “lovely”.

And spelling color with a “U”.

After all, we’re Texans……and Texas don’t do stuff like that.