If you’re a true fan of this blog, you’ll remember our dear friends the Pecks. 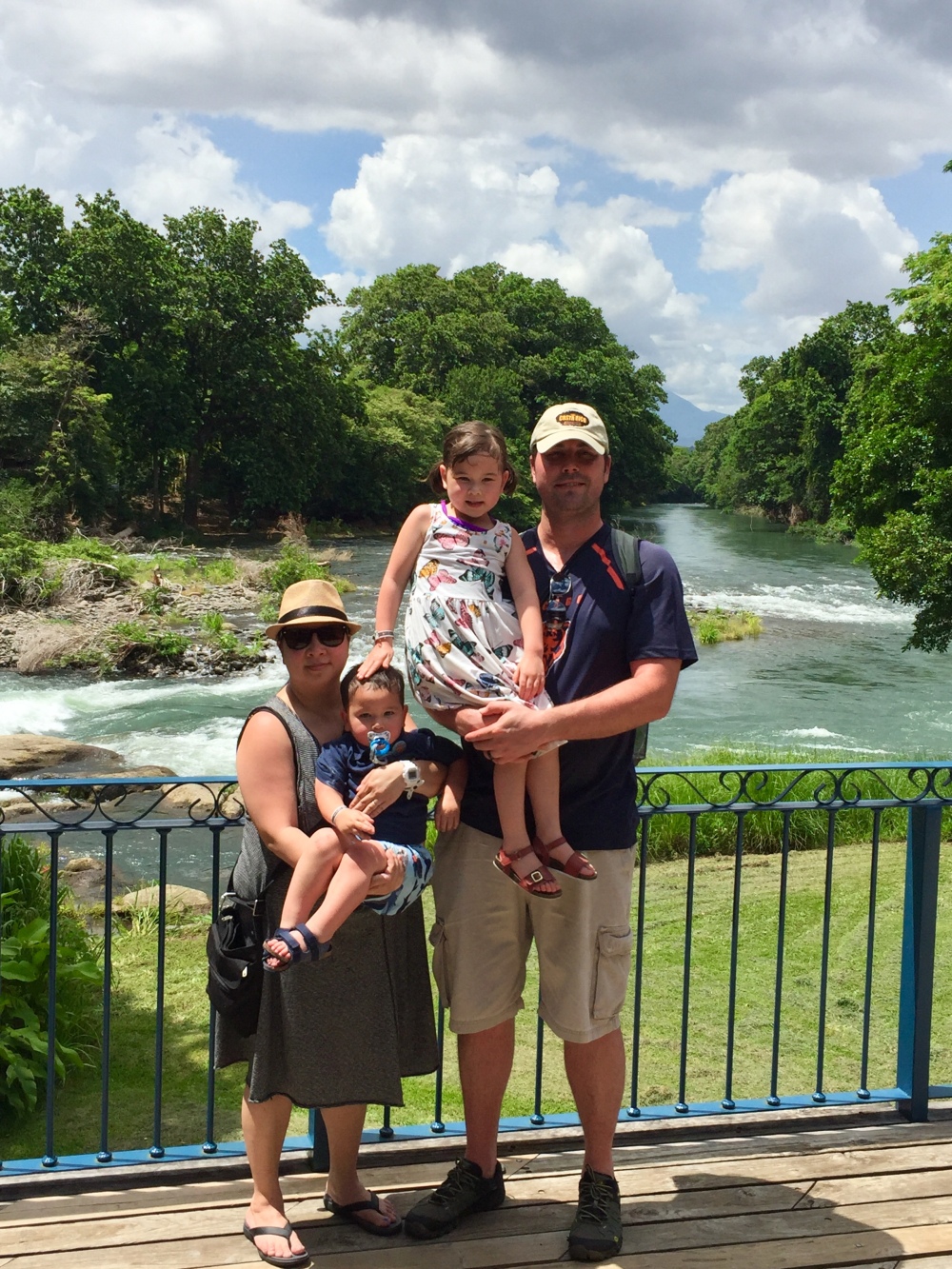 Kylie and I worked at Macy’s together about 30 years ago. She met Gert at the hotel they both worked at and the two of them were married on Maui, in a rain forest, on a bridge, over a koi pond. Ahhhhh…… Jamie and I were there for the wedding ceremony, and through an odd turn of events…..we  infiltrated their entire honeymoon too.

We’ve shared many adventures/vacations since then, but it’s been a running joke that we would tag along on their 10 year anniversary trip as well. It’s been 10 years, and they’ve added 2 kids to their tribe (Madeleine-5, and Henrik-2), so the 6 of us hopped on an American Airlines flight to beautiful Costa Rica for a week.

Here are some of the highlights of that trip… 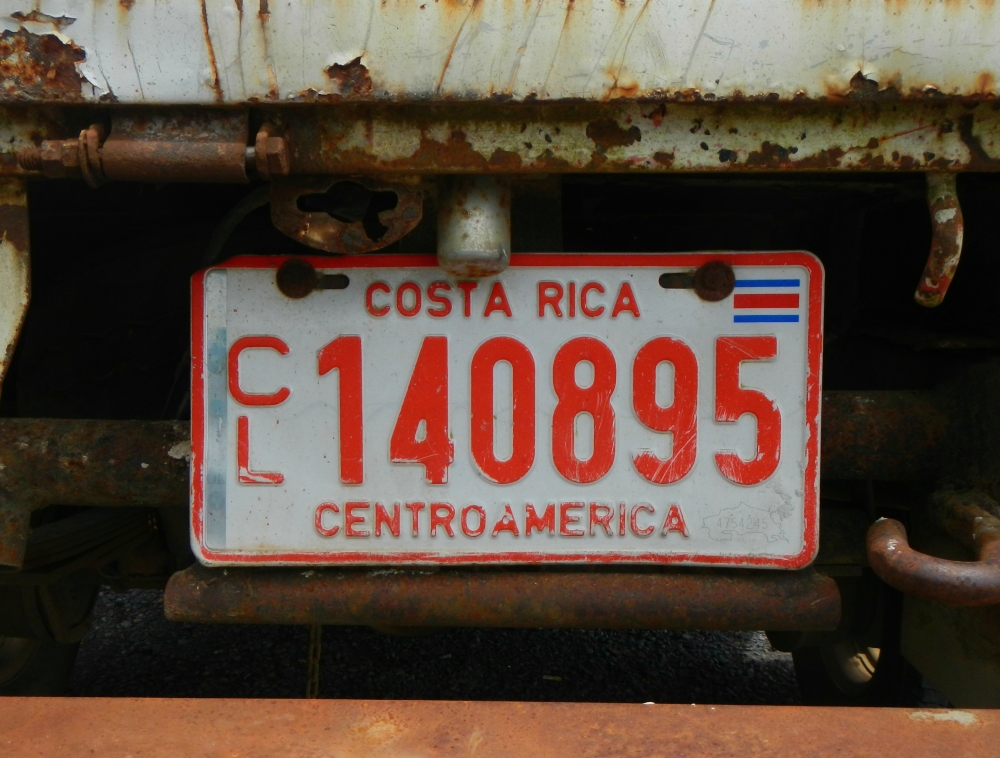 Costa Rica’s Arenal Volcano is honestly just slightly older than I am.

In 1968 the La Fortuna area countryside suddenly erupted and the Arenal Volcano pushed her way to the surface. It wasn’t long after that the local women washing their clothes in the natural springs noticed the water was much warmer than it used to be; hovering around 100 degree to be precise. We spent a few days just outside of La Fortuna at the Tabacon Thermal Resort and Spa where they have learned to capitalize on the natural hot springs anomaly.

I can honestly say that I’ve never stayed at a more beautiful tropical property. The warm soaking springs running throughout are surrounded with lush tropical plants, iguana, hummingbirds, and some of the biggest insects I’ve ever encountered. 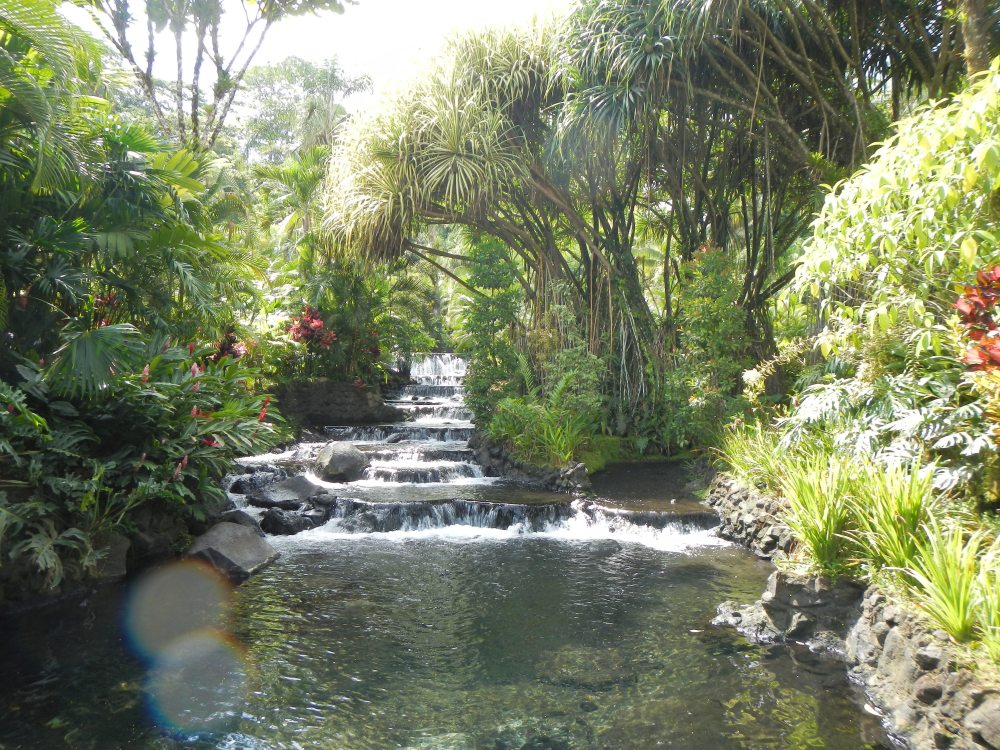 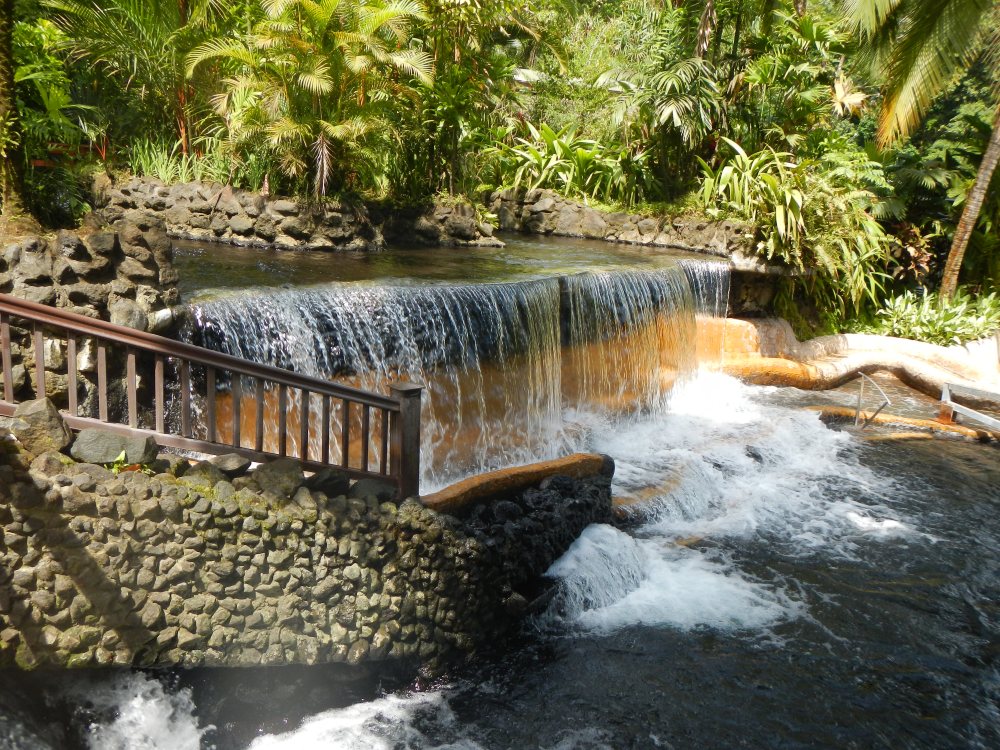 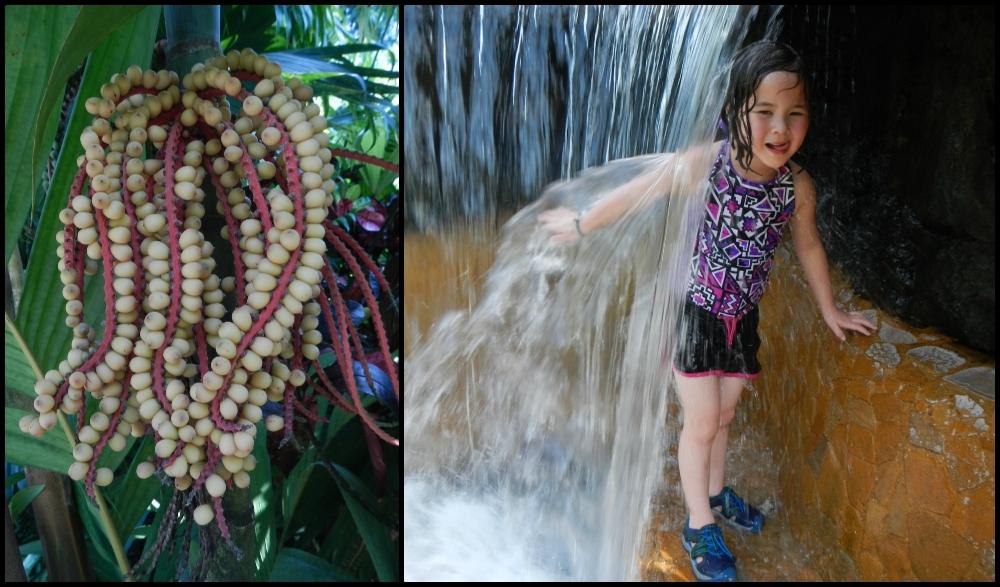 It was pure heaven, 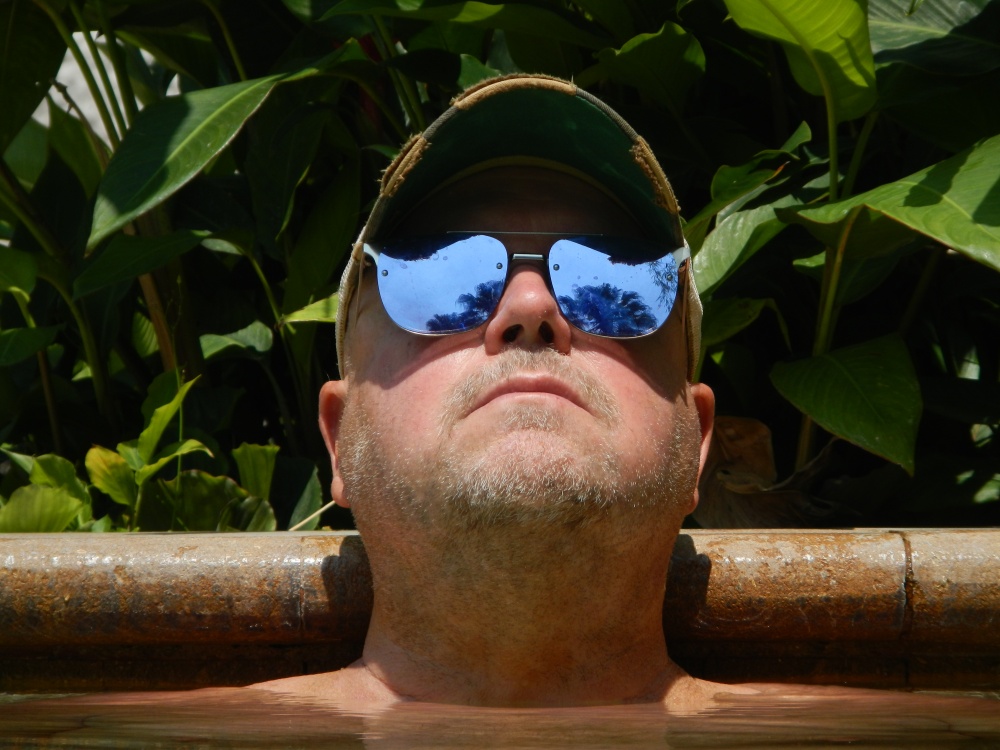 Our fist excursion took us to the Arenal Hanging Bridges of Mistico Park, a private nature reserve. There’s more that 2 miles of wilderness hiking trails with 6 suspension bridges hanging over the dense rainforest. The highest, the Waterfall Bridge, is over 300 feet above the forest floor…..and the Catarata Morpho Azul (Blue Morpho Waterfall), naturally.

With over 300 species of exotic birds, 700 species of fauna, and a smattering of central American animals, like the coatimundi ……there was plenty to keep us all entertiained. Except Henri, who fell asleep in his sherpa pack. 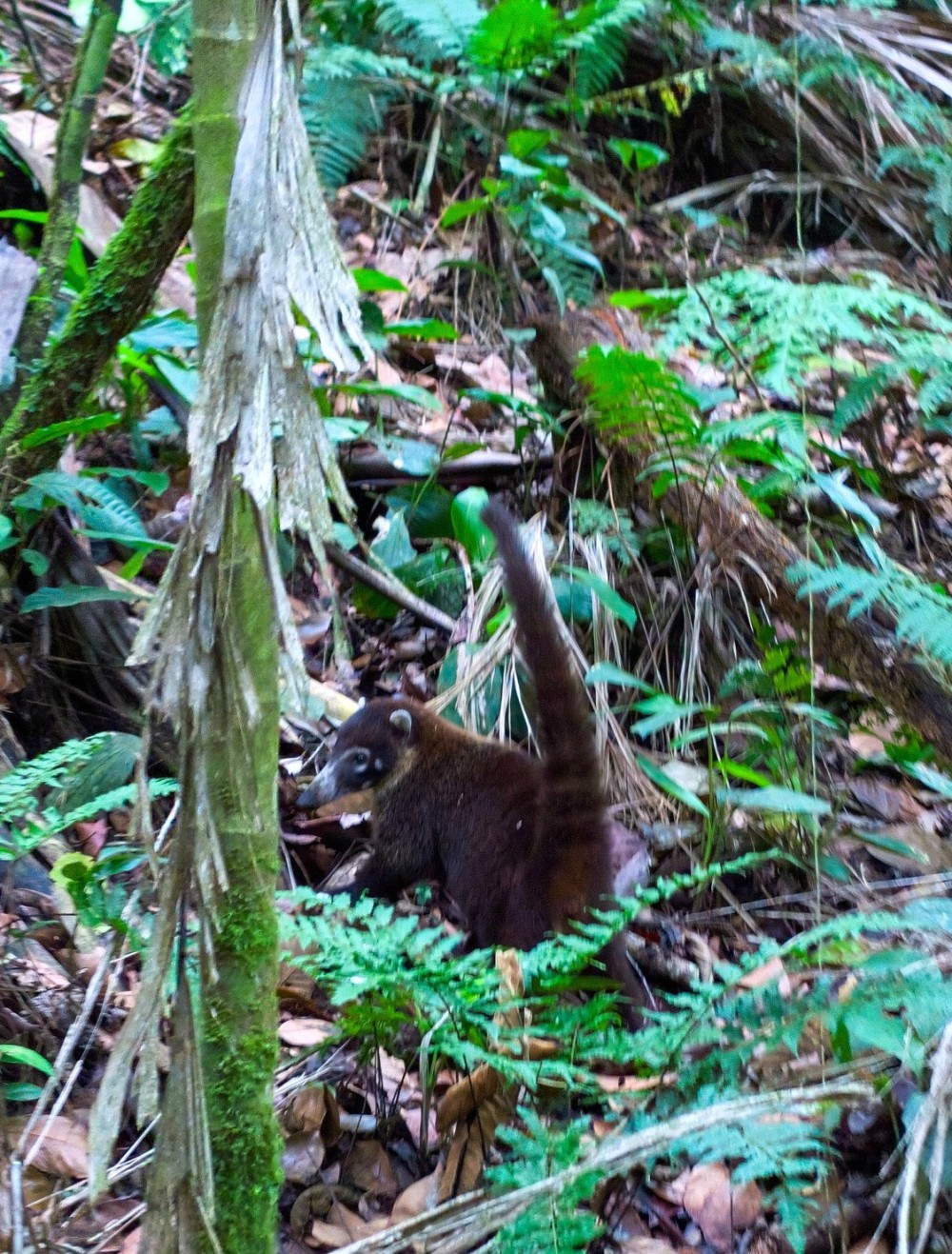 Madeleine brought her magnifying glass, which came in handy when we crossed paths with leaf-cutter ants. 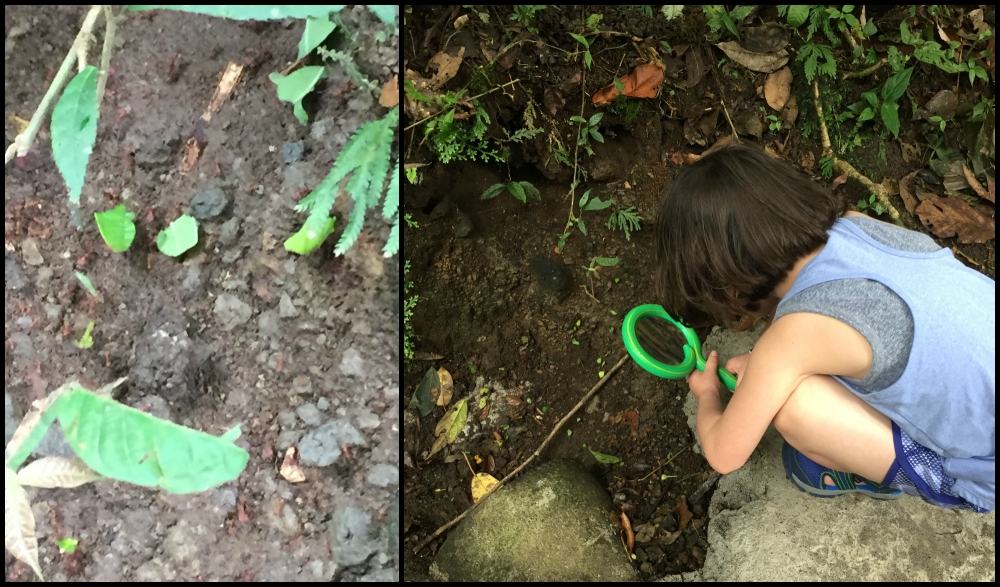 While the Pecks enjoys some family time, Jamie and I took a morning trip to the La Fortuna Waterfall. Because it was off-season, we were the only ones in our tour group…and for a little while, the only ones at the waterfall. (except for a dirty hippie couple, but we’re not counting them).

It’s 500 steps to the bottom of the valley, along a pretty steep cliff. We took 10 minutes to descend; and 30 minutes to ascend….with amply resting time, of course. No one ever said it, but I know the people passing us on their way down were thinking “Los Americanos Delicatos”.

My pictures don’t do it justice…it was so beautiful. See the rainbow over my head? We swam a little in the frigid water before taking our sweet-ass time climbing the 500 steps back to the parking lot in flip-flops. Because of our slow accension, our tour guide, Daveed, was able to spot a deadly eyelash viper just hanging out in a tree about 20 feet from our path. You’re welcome.

He’s called an “eyelash” viper because of the protruding scales over his eyes that resemble eyelashes. They aren’t aggressive snakes, but have been known to strike humans in the neck if they feel threatened. *Interesting fact: of the 23 deadly snakes in Costa Rica, only 22 have antivenoms available. Luckily, we didn’t need any, but we did start looking for snakes at head level.…and not just around our feet.

After a few days in La Fortuna we headed west and took a 3 hour drive to the Westin Resort at Playa Conchal near Tamarindo.

Another day, another waterfall. Took some time to stop at the Catarata Llanos del Cortes (Cortes Plains Waterfall). It was a nice break from the 3 hour drive to take a dip in the cool green/brown water for a little while. 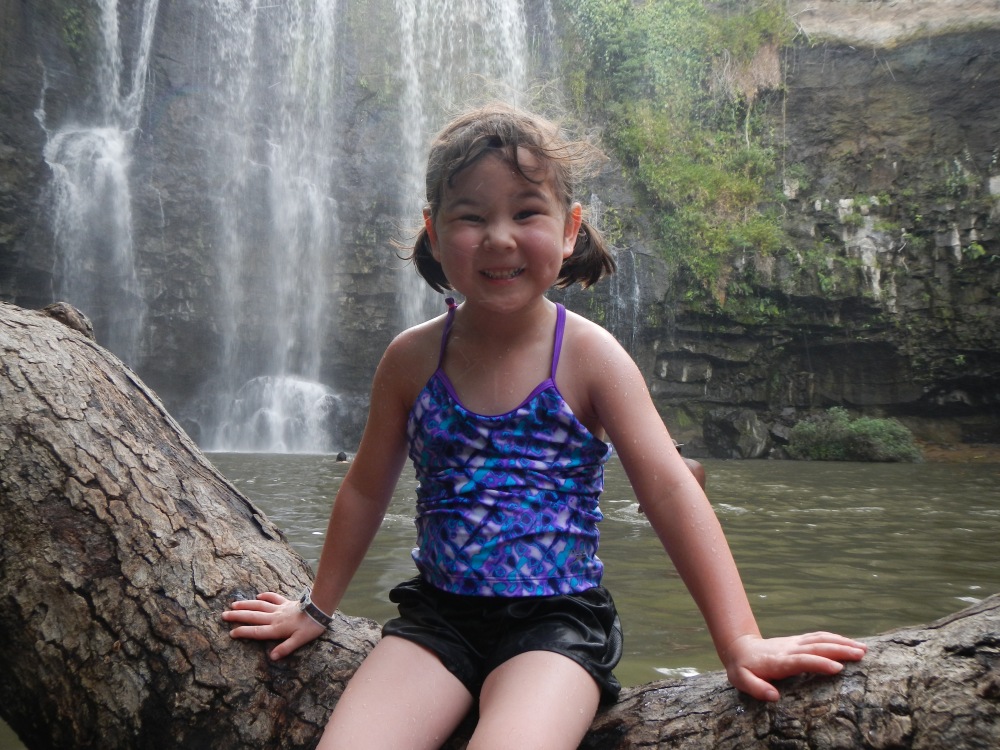 Playa Conchal was so beautiful. I assumed from the name that it would be covered in sea shells…and it was. Sort of. Unfortunately, the sand is composed entirely of smashed shells. Hence the name; Playa Conchal (Sea Shell Beach). 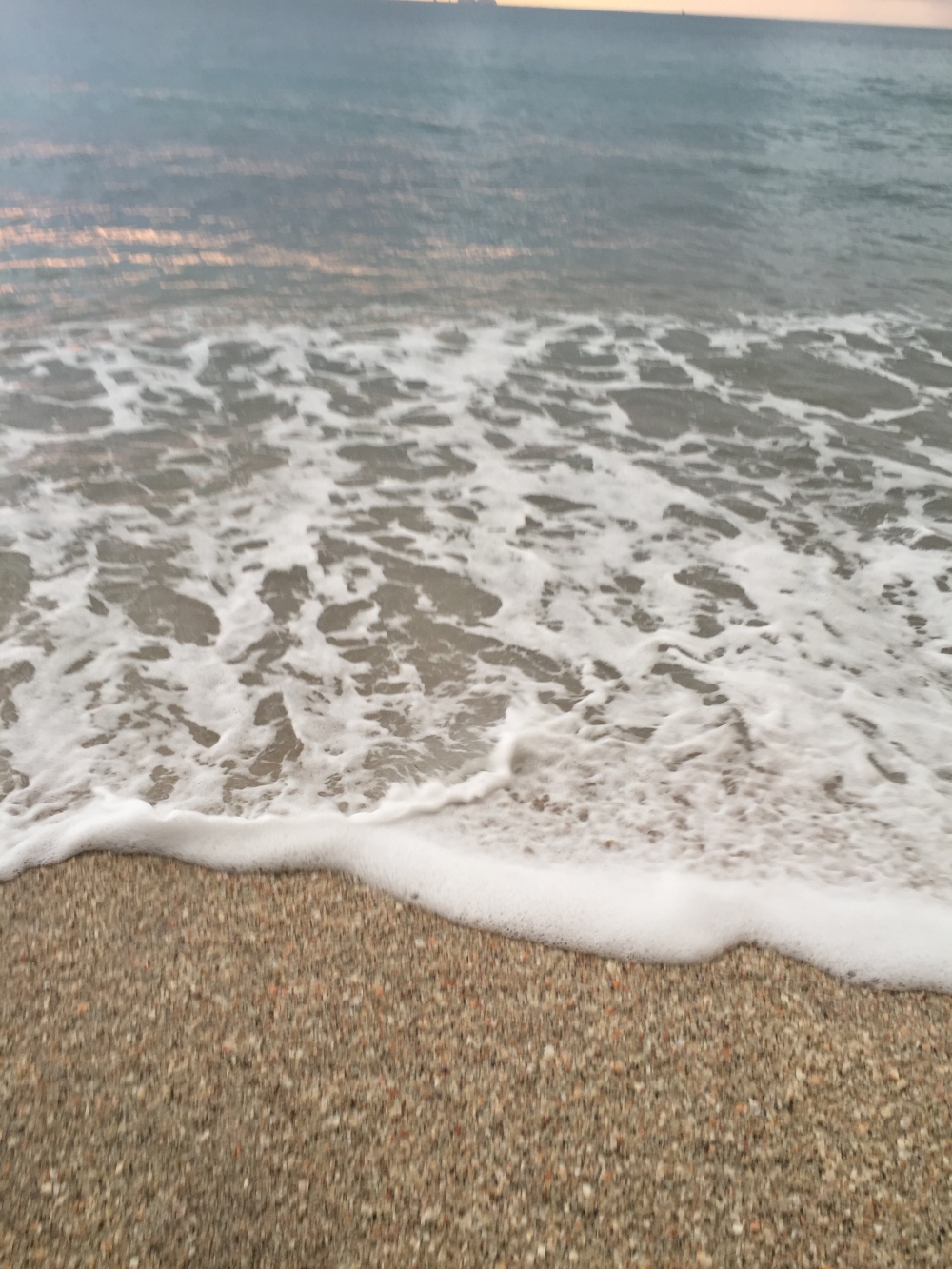 On friday, we took an early morning trip to the Palo Verde National Park and had a short boat ride on the Rio Tempisque.  After about an hour of the “Costa Rican Massage” (That’s traveling down dirt roads with no shocks) we arrived at the muddy river and a few small passenger boats where we were given a private tour. We saw Capuchin and Howler monkeys, long-nosed bats clinging to a tree trunk, several exotic birds and most importantly, American crocodiles.

Because there was no “boat safety briefing”, we lightly joked with the kids to be sure and keep their hands inside the boat. When our captain dangled a raw chicken leg off the side…. it became all too clear that there was no joke involved. CROCODILES CAN FRIGGIN’ JUMP!

Just look at this 6 foot monster, AND he was one of the smaller ones. I’m not kidding when I tell y’all that all 6 of us screamed when that thing sprung about 4 feet out of the water and up the side of the boat.

Maybe we should spend the rest of our time relaxing at the resort…….and relax we did. Pool time and beach time were only interupted by meals and adult beverages. 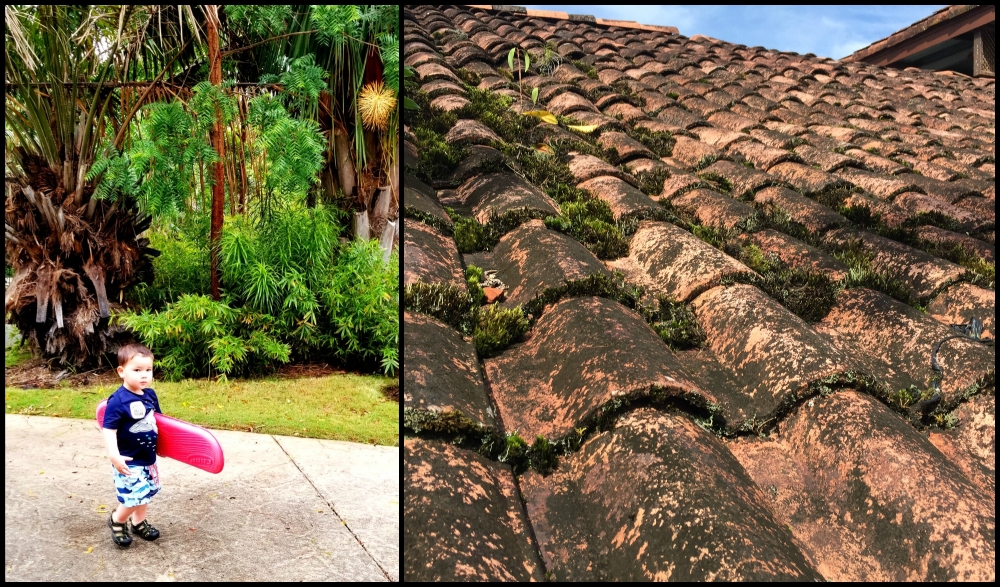 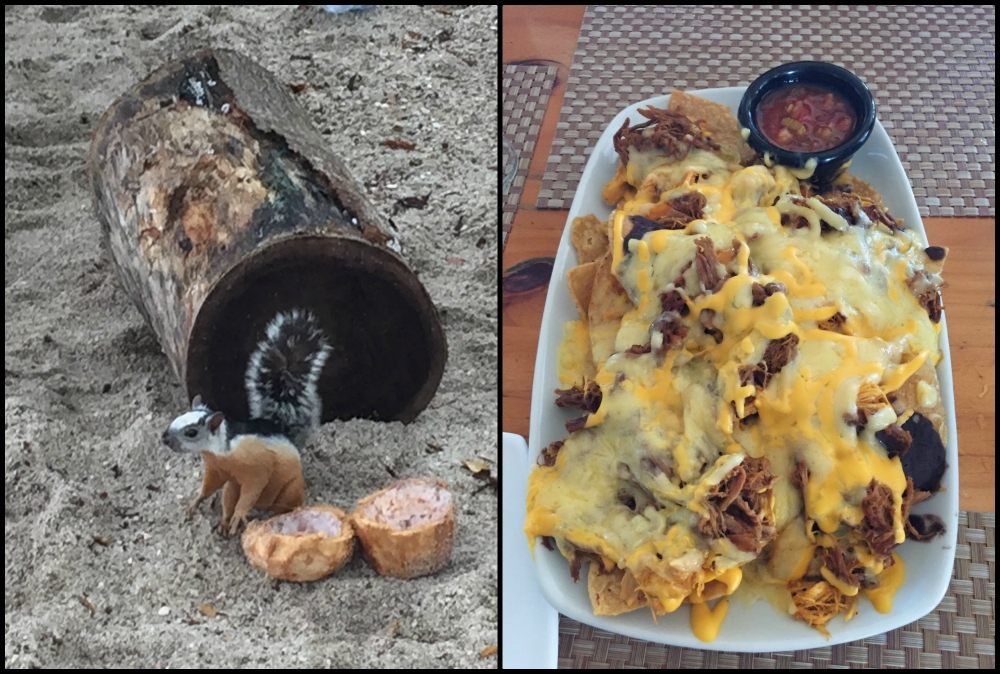 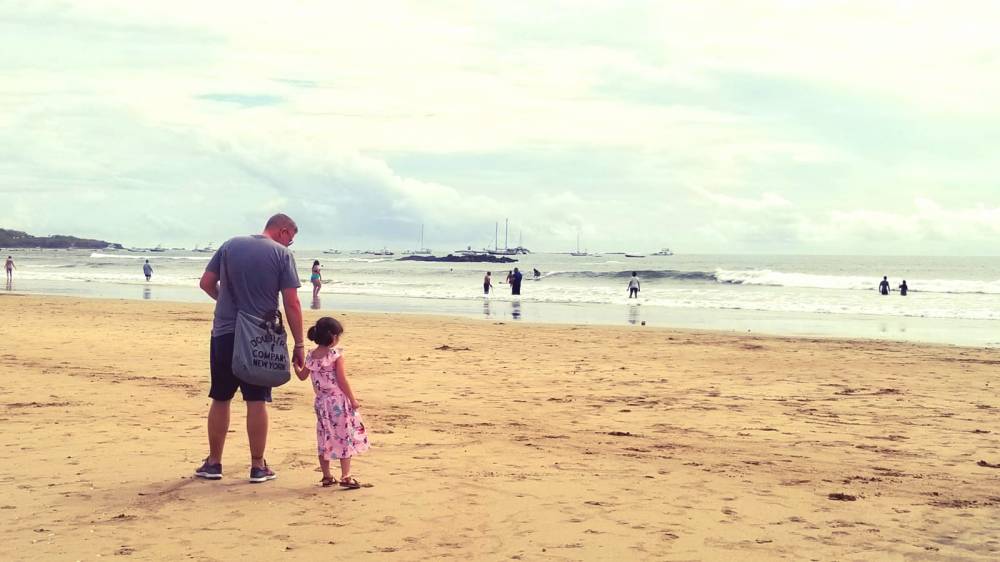 Before we left, Maddie and I checked off her map of all the Costa Rican wildlife we’d seen in person. 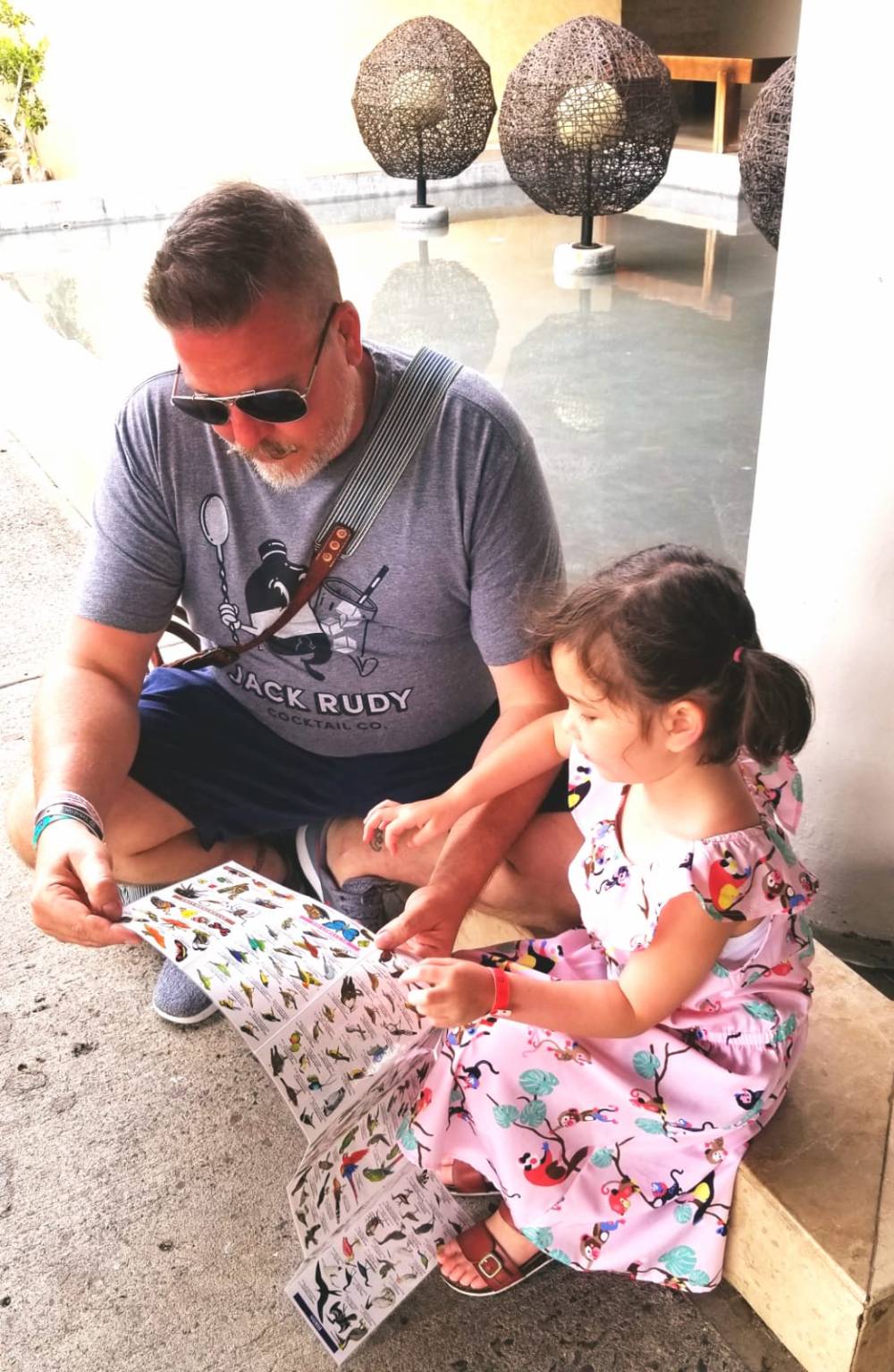 We saw a LOT of exotic animals, insects and birds; Coatimundi, giant moths, so many iguana, hummingbirds (even one on a nest), verigated squirels, racoons, bats, capuchin and howler monkeys, harlequin beetles, sloths, a few unexpected snakes, caiman, frogs of all sizes, butterflies for days, and of course…crocodiles.

It was such a treat to travel with these kids and see everything through their small eyes.

The last vacation we all took together, to Seaside Florida 4 years ago, Maddie was just a baby and I don’t think she enjoyed the trip very much. I told her that when I was her age the most exotic vacation I ever took was to my grandparent’s house in Ohio, and the Toledo Zoo.

She thought I was kidding.

She’s been to the Louvre.

Where are we going for the 20th?